You are here: Home » Articles filed under: 'News' » Article: 'A House & a Home – perspectives'

A House & a Home – perspectives 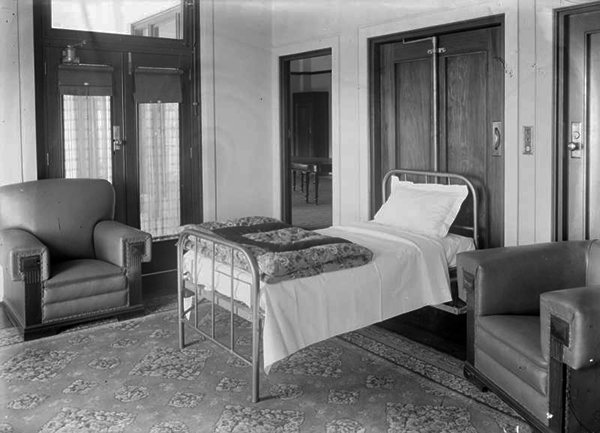 The Prime Minister, Speaker of the House, President of the Senate and Leader of the Government in the Senate each had a fold down bed provided in their rooms at Parliament House in 1927. The bed folded into the cupboard immediately behind it. NAA: A3560.

The families from number 18, Museum of Australian Democracy at Old Parliament House, 12 May 2020

18 King George Terrace, Parkes, ACT, may not seem like a familiar address, but I’m sure you will recognise the house and some of the families who grew up here.

Just like households around Australia, in this house babies played on the floor at their parents’ feet, toddlers interrupted adult conversation to get dad’s attention, and the older kids loved to roller skate around the house and explore every nook and cranny.

The most detailed stories of growing up here are from former Deputy Prime Minister and long-term leader of the National Party of Australia, Doug Anthony. He was just seven years old when he first came to Canberra after his father was elected to parliament.  This was in 1937, just 10 years after the official opening of the building.

The new capital was in its early stages and accommodation was sparse. During parliament’s four month winter session the Anthony family and many others stayed at the conveniently located Kurrajong Hotel, but it was lonely there for Doug.  The few other children at the hotel didn’t go to the same school, or, like the children of future short-term Prime Minister Frank Forde, were a little older.  In what may have been another issue for a seven-year-old boy, the Forde children were girls! Prime Minister Joe Lyons and wife Enid were quite good friends of Doug’s parents but they and their large family lived at the Lodge.

As a result, much of Doug’s time after school was spent at Parliament House. He explored every inch and soon became well known to most of the attendants and some of the ministerial staff.  In the kitchens he was always offered a scone or a cake, and a favourite spot was the boiler room, where a couple of men fed coal into the boilers for hot water and heating. He recalls they were good company and told good yarns. Sometimes he would use the lower floor, currently home of the Behind the Lines exhibition, for roller-skating!

It was exciting to go into the Prime Minister’s office when the PM wasn’t there and pull out his secret bed from the wall.  Like the bed itself, episodes of bouncing on the mattress remained secret.

Sadly, in 1941 Doug’s mother died. He left Canberra and didn’t return for 16 years until, in 1957, aged 27, he was elected to parliament at a byelection, replacing his father who had recently passed away. When he entered the building, he was amazed at the number of attendants who remembered him.

One of the most famous names associated with this address is Menzies. Sir Robert Menzies served 32 years here from 1934 to 1966, 18 of them as Prime Minister, making him Australia’s longest serving PM. His youngest child, daughter Heather, often accompanied her mother to watch proceedings in the House of Representatives. The teenager could not always refrain from providing a running commentary on men and events with Mr. Menzies telling her brother, Kenneth, by letter: “Heather’s sotto voce comments in the galleries during speeches… are really worth going a long way to hear”.

Sir Alexander Downer, a minister in the Menzies Liberal Governments and another with family connections to Number 18, observed how father and daughter seemed united by a “mystical understanding” and assessed Heather as “the principal joy” in Menzies’ life during the period he knew him.

There were the Creans and the Beazleys, too. Frank Crean was a Member of the House of Representatives from 1951 to 1977 who not only served as a minister in the Whitlam Labor Governments but rose to the lofty position of Deputy Prime Minister; one of his colleagues, Kim Beazley Snr, was an MP from 1945 – 1977 and also served as a minister in the Whitlam Government. Their sons, Simon Crean and Kim Beazley Jnr practically grew up together, from babies crawling around the desks of their fathers’ offices to boyhood friends playing in the parliament building, much as Doug Anthony had done years before. Given their upbringing it was probably no surprise that both also served as ministers in the Labor Governments in the 1980s and 90s, although this time it was the Beazley who rose to Deputy PM. During John Howard’s governments both men had periods as Leader of the Opposition.

Another famous Labor name is Calwell. Mary Elizabeth Calwell, daughter of Chifley Government Minister and later Leader of the Opposition Arthur Calwell, recalled her mother “bringing us up to meet our father again” during school break and coming to Parliament House to watch Question Time. Families sat in the Speaker’s Gallery at the back of the House of Representatives chamber. Apparently on one occasion her brother ran down, as a toddler, to the front of the House where the Ministers sat, to see their father.

While these political families are strongly connected to number 18, there were also families that actually lived here.  From 1927 up until 1976 Parliament House had live in Housekeepers, who were given a small flat in the south western corner of the building.  Perhaps the most well-known occupants were the Pettifer family. Thomas Pettifer had been an officer of the federal parliament from its earliest days, in 1901, and relocated to Canberra with his family in 1927.  He was appointed Housekeeper in 1933. Like Doug Anthony a few years later, the Pettifer’s 13-year-old son Jack loved to roller skate around the corridors, and the verandahs. When parliament was in recess, he liked to visit the Refreshment Rooms and play the modern Radiola radiogram, and sometimes had a friend over for tennis on the Parliament House courts. Young Jack also found that the vertical steel ladder which allowed access to the flagpoles also provided access to the perfect spot for sunbaking, hidden behind the six foot wall!

Brian Leadbeatter has been a member of staff at the Museum of Australian Democracy since 2005 and is currently the Volunteer and Museum Experience Coordinator. He loves to share interesting facts and trivia he discovers about the history and people of Old Parliament House. Brian is also an announcer on the parliamentary broadcasts heard on ABC Newsradio.