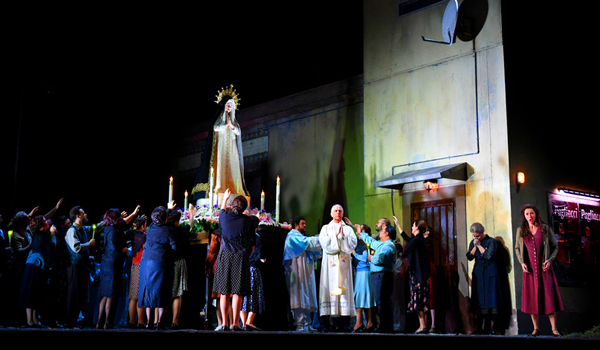 Rather than more measurement of culture, we need more conversation about what kind of culture Australia wants. AAP Image/Tracey Nearmy.

Julian Meyrick, A new approach to culture, The Conversation, 16 August 2017

“I can’t understand why people are frightened of new ideas,” the composer John Cage once remarked, “I’m frightened of the old ones”. Last week’s announcement that the Myer, Tim Fairfax Family, and Keir Foundations are sponsoring “a new approach” to arts advocacy and research (and presumably research into arts advocacy) is a bright spot in the fungal gloom that has hung heavy over Australian cultural policy in the last five years.

Putting A$1.6 million on the table, the foundations called for expressions of interest in December 2016. The successful proposal is a partnership between the Australian Academy of the Humanities – a reassuring, albeit conventional choice – and Newgate Communications, a corporate relations firm. Neither are arts insiders.

They plan to deliver what Newgate Associate Partner Simon Troeth calls “evidence-based policy advocacy” that will “look beyond electoral cycles and support a long-term vision for a more sustainable, inclusive and vibrant Australian arts and culture sector.”

A welcome aspiration. In an upbeat article for the Daily Review last Thursday, Esther Anatolitis gave a useful and inclusive round up of existing research in the area and suggested, like others, that consultation is now required to harness “conversations stimulated by the philanthropists’ provocations [that] have brought colleagues together in exciting new ways.”

There’s that word again: new. It’s a confronting one because it asks the question “new, how?” What kind of research will make a difference, and what does making a difference actually mean? Antatolitis alludes to

… a confident future where the value of Australia’s arts could be expressed, quantified and advanced with compelling impact and tangible influence.

Here transformation is methodological rather than political. Proofs of value, trapped in the minds and computer drives of hard-pressed cultural organisations, are released into circulation, whence they have a positive effect. This is evidence-based research at its most fragrant. Data is communicated/policy change results.

But has any area of policy in the last 15 years, much less the cultural one, fitted this rational choice ideal? Taking a historical view of “the problem” of the value of arts and culture suggests a slightly different view.

From the late 1970s onwards, the increasing demands that the cultural sector produce evidence of its value have come from governments less and less inclined to support it; indeed, less inclined to invest in many areas of collective concern, and strongly desirous of redefining public goods and services as private ones, and marketizing them accordingly.

The replacement of policy debate over the all-important question “what kind of culture do we want?” by reticulated, quantified, assessment procedures stems from a moment in time when governments became fixated on getting “value for money” for taxpayer spend.

The monocular vapidity of this reduction belies its administrative adhesion and political use. If you are forever demanding someone “demonstrate” the benefits they provide, you never have to describe or defend the world you want them to be of benefit to. In the 1980s and 1990s, artists and cultural organisations disappeared under a tsunami of Byzantine evaluative and audit tasks that disguised the heavily partisan beliefs that produced them.

How did culture get mixed up in such world-withering logic? Under prime ministers Chifley, Menzies and Whitlam, cultural policy was part of “quality of life” legislation. Its role was first and foremost cultural, and it was supported, or not, on that basis. It fitted into a nation-building vision for this country. Australian culture was valuable because it was ours, not because quantitative indicators showed it was a reliable delivery mechanism for government-preferred externalities.

In the last 40 years, arts and culture have found themselves weighed against criteria and targets not of their choosing, while the sophisticated calculative practices constructed to do this have sometimes exacerbated the alienated character of the situation.

Restoring a sense of culture to culture’s evaluation is a priority for a new approach: developing a language of advocacy that is meaningful rather than “objective”, a standard of proof hard to square with the kinds of non monetary, long-term benefits the arts provide (some of the best work on this can be found in Robert Hewison’s 2014 book Cultural Capital: the Rise and Fall of Creative Britain).

And behind the bespoke problem of the assessment of culture, lies the bigger job of resuscitating the idea of public value that has been destructively eroded by four decades of morally bankrupt ideological obsession.

If governments today are grappling with a set of issues from climate change to wage stagnation they seem powerless to redress, it is in part because this concept, which should have pride of place in all policy domains, has been displaced from its key informing position.

Australian culture is more than series of market preferences. It is more than a list of its impacts on well being, social cohesion, education levels, and the interstate sale of hotel beds. These kinds of things are useful to known. But an approach to cultural policy that is genuinely new must match the silver flutes of methodological verification with the golden trumpets of political change. It must change our idea of culture, not just the way we measure it.

That’s a goal that goes beyond the generation of data, though it certainly includes it. It’s about giving voice to culture as culture, and to the people who create it, promote it, and participate in it, on the same grounds. It’s about evidence of value, but also about the value of that evidence, and what vision of Australian society we want it to be serving.

For too long the primary experience of culture has been missing from the cultural policy debate. “A new approach” has the opportunity to ensure it is incorporated now. This is a moment to step off the evidentiary hamster wheel and ask what our culture is for.