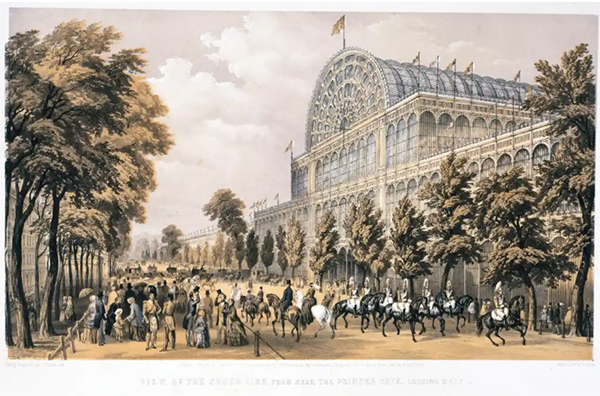 Lithograph by T Picken after an original painting by Phillip Brannan, showing crowds and soldiers on horseback outside the Crystal Palace, built to house the Great Exhibition in 1851. Photograph: Science & Society Picture Library/SSPL/Getty Images.

Jessica Elgot, What was the Great Exhibition and why did a Tory peer want a new one?, The Guardian, 7 January 2022

David Brownlow, the Tory peer who originally funded Boris Johnson’s flat refurbishment, was a keen backer of plans for a new Great Exhibition.

The first Great Exhibition, in 1851, was the brainchild of Queen Victoria’s husband, Prince Albert, and took place in a huge “crystal palace” in Hyde Park, displaying 100,000 objects over more than 10 miles.

It was intended to showcase cutting-edge technology and creativity from across Britain and the empire, and from other foreign nations, including folding pianos, printing presses and early versions of bicycles.

Brownlow, a trustee of the Royal Albert Hall, was inspired to create a new version of the event jointly with the London venue.

Downing Street said Brownlow’s idea was referred to the culture department and he met the then secretary of state, Oliver Dowden, at the Royal Albert Hall to discuss the proposal in January 2021. It came when Brownlow was in the midst of setting up the Downing Street Trust, the vehicle designed to fund the pricy refurbishment of Boris and Carrie Johnson’s No 11 Downing Street flat.

But No 10 said it decided to proceed with Festival UK instead, an event in which Brownlow is not involved. Its first incarnation was as the Festival of Brexit, proposed under Theresa May and becoming a Johnson 2019 manifesto pledge.

In the manifesto, the Conservative party said: “The Festival of Great Britain and Northern Ireland in 2022 – a national celebration which coincides with the Birmingham Commonwealth Games – will encourage our leading arts and cultural organisations, universities, research institutes and businesses to come together to inspire the next generation in British innovation and creativity.”

That now has yet another iteration, Unboxed, comprising a number of projects across the UK with free events, installations and online experiences. It is part of what No 10 calls its year of celebration, which includes the Birmingham 2022 Commonwealth Games and the Queen’s platinum jubilee.

Plans for a Great Exhibition 2 may yet surface as a private endeavour. For now, Brownlow is honorary vice-president of the Windsor Platinum Jubilee Celebrations.