You are here: Home » Articles filed under: 'News' » Article: 'A tyrannosaur of one’s own'

A tyrannosaur of one’s own 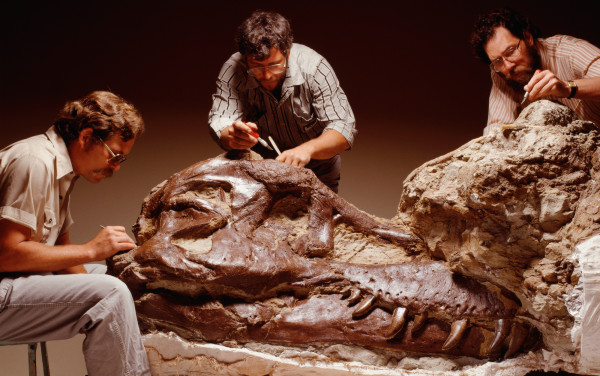 Dinosaur collecting isn’t just for museums any more – film stars and sheikhs do it too. What drives a man to covet big bones?

The world’s most famous palaeontologist doesn’t understand why anyone wants to collect dinosaurs. Mark Norell sits across from me in his expansive corner office at the American Museum of Natural History in New York City and launches right in: ‘People are weird. I think: “Who is buying this shit?” No accounting for people’s taste. I have a passion for dinosaurs, but certainly not what I would call “dinosaur insanity”. Dinosaurs are just a medium for me to do science. But if I were doing the same thing on some other organism – you wouldn’t be here.’

I first heard about private dinosaur-collecting in 2007, when the actors Leonardo DiCaprio and Nicolas Cage engaged in a bidding war over a 32-inch Tyrannosaurus bataar skull at an auction in Beverly Hills. In the end, Cage outbid his rival via a $276,000 offer. (Just before Christmas 2015, Cage returned it on order of the department of Homeland Security; unbeknown to him, he had bought a dinosaur part smuggled out of Mongolia.)

Since that auction, I perk up whenever I see news about any other big-name dinosaur collectors: the film directors James Cameron and Ron Howard, actor Brad Pitt, and Nathan Myhrvold, Microsoft’s former Chief Technology Officer who, according to Men’s Journal, has a Tyrannosaurus rex skeleton in a glass solarium in his large home in Bellevue, Washington. Various high-flying sheikhs are in on the pastime, too. And regardless of what his Republican colleagues think about evolution, the former US House Speaker Newt Gingrich kept a T rex skull cast in his office.

As I read more about this current crop of rich male (always male, it seems) collectors, I gave them their own species name: Abundus egocentrus. I tried to understand their motivation. Was having a big vicious dinosaur on display akin to owning a huge scary dog like a Rottweiler? Were they saying to the world: ‘Look what I can tame! Look what I’m not scared of! I’m ruthless, too!’ Or maybe there were deeper psychological implications. Did collecting dinosaur fossils tap into childhood issues, delivering a soothing narrative about where we came from? Whatever the answer, there was something about this topic that was infectious and persistent enough to merit an investigation.