November 1st, 2017 | Browse other: News. | Tagged with: Center for the Future of Museums, Museum magazine | 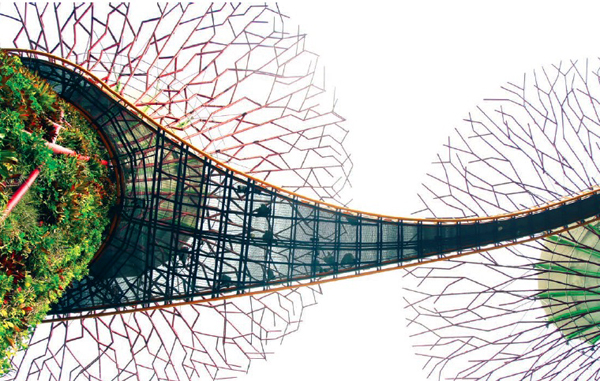 The November/December issue of Museum mailed out yesterday, as well as going up on the web. (This issue of the magazine is available as a free download for members and non-members alike).  When you open your print or digital copy, you may notice something a little odd. We published this edition a little early—23 years early, to be exact.

This bit of chronological legerdemain serves as prelude to the tenth anniversary of the Center for the Future of Museums, which falls in 2018. The goal of this exercise in “future fiction” is to help you investigate one possible future and think about how our organizations might respond. As you read the stories in this issue, I hope you ask yourself, “Do I think this could happen? Do I want this to happen?” And, perhaps most importantly, “Does this have to wait until 2040, or can I make it happen now?” 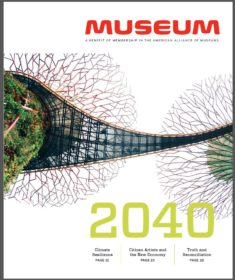 I hereby award futurist points to any reader who asks “in which version of the year 2040 do these stories take place?” Of course one of the main purposes of strategic foresight is to help us think about many plausible ways the future could play out. This issue of Museum is set in one specific future that might result from existing limits and challenges playing out over coming decades. This scenario, dubbed A New Equilibrium, was developed with the input of many people inside and outside the museum field, drawing on mainstream research and projections on demographics, technology, the economy, environment and other sectors. For example, in this version of 2040:

In the face of these challenges, museums have prospered. Attendance is robust, our organizations are financially stable, and our visitors, staff, and board members reflect our communities.

The scenario in place, I sent an invitation out through the Alliance’s professional networks for people willing to immerse themselves in this version of the future, writing content that explores what museums are doing in order to thrive in the face of these challenges. There were a few ground rules:

Authors were only permitted to use the names of real museums if they themselves represented that institution, or obtained permission from the organization in question. For this reason, you may notice many, many museums with names similar, but not identical, to existing organizations.Authors had to stay within the bounds of this particular scenario: a future created by current trends playing out over the next decades. For example, they could posit colonies on the Moon or Mars. (After all, Elon Musk is spending billions on his plans to colonize Mars, hoping to launch the first flights in the 2020s). However, they couldn’t introduce massively disruptive events such as a global fatal pandemic disease or a nuclear world war III, or invoke the most extreme estimates regarding climate change.

Authors could write as themselves (from the perspective of being 23 years older than they are now), or they could invent fictional personas reflecting people they imagine will be working in our field by that time. For example, Sarah Sutton attributes her opinion piece on museums, equity, and environmental sustainability to an environmental activist named Ocean Six.

Given these prompts and these constraints, what stories did people invent? In addition to Sarah’s (sorry, Ocean’s) musings on the next frontier of green, that is. Rachel Hatch, program officer for community vitality at the McConnell Foundation, gives us a funder’s take on how museums are supporting the creative economy in 2040, envisioning how universal basic income might create a cadre of “citizen artists.” Adam Rozan’s keynote from the AAM 2040 annual meeting explores how the very concept of “museum” has changed over time, coming to encompass roles that used to be siloed in libraries, community centers, schools, and places of worship. Omar Eaton-Martinez writes about the newly formed US Truth and Reconciliation Commission, and the role museums can play in healing and remembrance. (In this future, Omar holds the position of secretary of the Smithsonian Institution where he is, in the present, intern and fellows program manager for the National Museum of American History. And President-elect Sanai Eaton-Martínez, who is creating the TRC? That’s his daughter.

Nicole Ivy, the Alliance’s director of inclusion, took over the Community section of the magazine, crowdsourcing input on what museum jobs might exist in 2040. (My favorites include poet-in-residence, digital fabrication specialist, and spiritual services director.) Together, Nicole and I tried to ensure that the magazine as a whole reflects the diversity—of race, culture, age and (non-binary) gender—we hope will come to characterize our field.