You are here: Home » Articles filed under: 'News' » Article: 'AAMD has voted to impose sanctions'

AAMD has voted to impose sanctions 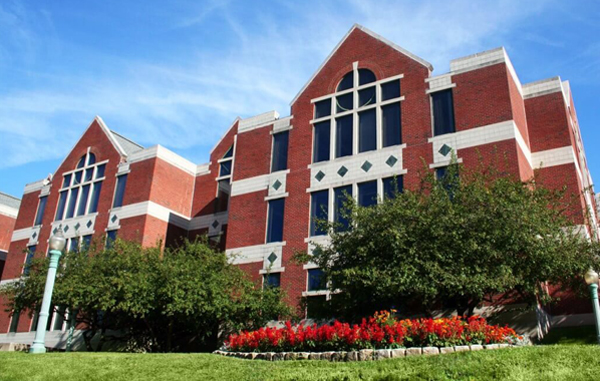 The Berkshire Museum and La Salle University face sanction from the Association of Art Museum Directors.

Less than a week after Berkshire Museum completed the sale of 13 works across a series of auctions at Sotheby’s, an industry watch group has voted to impose sanctions on it, as well as La Salle University Art Museum, which sold off several works at Christie’s.

The Association of Art Museum Directors (AAMD) said in a statement today that the move “follows the decision made by each institution to use the proceeds from recent art sales to support operating budgets or expansion initiatives, a decision that violates one of the core principles of art museums. These actions are in opposition to AAMD’s policy that such funds must be used only to support acquisitions of art.”

The last time the AAMD voted for such sanctions was against the Delaware Museum of Art in June 2014. Those sanctions, as of today, remain in effect.

Neither representatives for the Berkshire Museum nor La Salle University Art Museum immediately responded to request for comment. 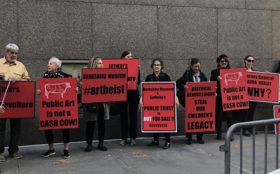 Protestors from the Berkshires gathered outside of Sotheby’s auction house. Photo: Caroline Goldstein.

The Berkshire offered a total of 13 works across different sales at Sotheby’s and 11 found buyers for a total of just over $15 million, though the net total was closer to $13 million, after accounting for the buyers premium that the auction house gets. One day after a major work, Frederic Edwin Church’s pastoral scene, Valley of Santa Isabel, New Granada (1875), failed to sell on an estimate of $5 million to $7 million, the Pennsylvania Academy of the Fine Arts announced it had acquired the work in a private sale brokered by Sotheby’s, presumable for a price near the low estimate.

The fact that the Church painting and a major Norman Rockwell, Shuffleton’s Barbershop, are going from Berkshire to other institutions—with George Lucas having snapped up the Rockwell for his planned Los Angeles museum—may have helped soften the blow for some who decried the institution’s sell off. But there is still plenty of vocal opposition to the sales.

A Berkshire, Massachusetts group called Save the Art—Save the Museum protested several times outside Sotheby’s, most recently on Wednesday morning, ahead of the major American art auction.

Meanwhile, Philadelphia’s La Salle University sold five works at Christie’s Impressionist and Modern sale for a total of $2 million, well above the combined $1.4 million high estimate. The university plans to dedicate the proceeds to educational programs, a decision that has angered many former staff members and museum supporters.

Meanwhile, the Baltimore Museum’s recently realized nearly $8 million (without premium) in sales for five works at Sotheby’s: a Warhol, a Franz Kline, a Jules Olitski, and two Kenneth Nolands. That move was not mentioned in the AAMD statement. The Baltimore Museum intends for the funds to help build up its collection of work by women and artists of color. AAMD guidelines only permit deaccessions when the funds raised are put towards future acquisitions of art.

According to today’s statement, AAMD communicated with both Berkshire and La Salle, urging them to consider alternative approaches to raising funds and offering support through the experience of its member directors. The group also warned both institutions that they ran the risk of sanctions if they didn’t heed its advice and issued several public statements to this effect over the course of the past year.

Now that both museums have sold off works and “continue to state their intentions to use funds for purposes other than art acquisitions,” AAMD’s board determined that imposing sanctions is the “necessary next step.”

The sanctions are effective immediately. The organization has asked each of its 243 member to refrain from lending or borrowing works of art or collaborating with either institution.