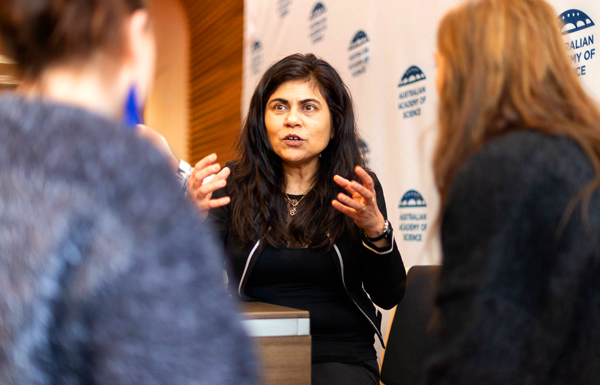 Academy Fellow and UNSW Professor, Veena Sahajwalla, is helping to raise the profile of women in STEM.

The Australian Academy of Science is calling for nation-wide views on the barriers and enablers that affect participation, retention and success of women and girls in science, technology, engineering and maths – STEM.

Australian Academy of Science Chief Executive, Anna-Maria Arabia, said women are lost at every stage as they seek to advance their career in STEM fields, due to a range of factors including stereotypes, discrimination and workplace culture and structure, some of which manifest from the early school years.

“We have seen the social and economic benefits of gender equity; however, Australia still has a long way to go as a nation to achieve equity in opportunities for girls and women to pursue STEM education and careers.

“This 10-year roadmap will give the nation a pathway to achieving success in this area.  Input from individuals and organisations across Australia is critical to ensure its success, and we encourage governments, research, industry, the not for profit sector and the media to participate,” Ms Arabia said.

The expected outcomes of the Women in STEM 10-year roadmap are:

The Women in STEM 10-year roadmap was announced in the 2018 Federal Budget and its recommendations will inform the Australian Government’s Women in STEM National Strategy. Written submissions from individuals and organisations and can be made until 8 October 2018.

Consultation workshops will be held in each state and territory through September and October 2018. Find dates and venues for consultation workshops here. The Women in STEM Decadal Plan is being overseen by an Expert Working Group that provides independent advice. Read the discussion paper.