April 3rd, 2021 | Browse other: News. | Tagged with: How many antiquities in Australian museums are stolen from our neighbours? | 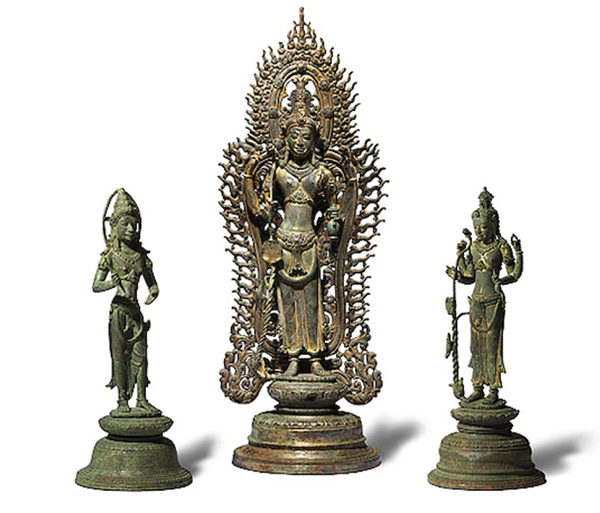 The National Gallery of Australia’s Padmapani with attendants has been linked to the late Douglas Latchford, a “notorious trafficker of looted antiquities”.(Supplied: NGA).

Will Jackson, How many antiquities in Australian museums are stolen from our neighbours?, ABC News, 29 March 2021

When the Shiva Nataraja — a 16th century bronze statue believed to have been looted from a temple in 1982 and then illegally exported — was returned to the South Indian town of Kallidaikurichi in Tamil Nadu in 2019, thousands turned out to welcome its arrival.

The 100-kilogram bronze statue covered in flower petals was carted behind a tractor through the streets to the newly restored Sri Kulasekaramudaiyar Temple to the sound of chanting and drumming.

After nearly two decades in the Art Gallery of South Australia, the dancing Shiva was finally coming home.

The statue was one of at least eight antiquities, each worth between $225,000 and $5 million, that Australian museums have repatriated to India since 2014 after conclusive evidence showed they had been removed from their country of origin illegally. All the museums concerned say they were unaware of this at the time of acquisition.

Experts in looted antiquities say the repatriations aren’t over, with many more items with similarly dubious provenance, or record of ownership, still remaining in Australia’s most high-profile galleries and museums.

Looted antiquities, a question of ‘when’ not ‘if’ 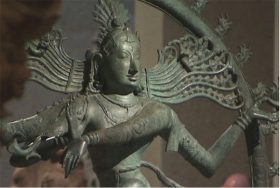 The National Gallery of Australia in 2014 repatriated a Shiva Nataraja statue it bought from the Art of the Past gallery for $5 million. (ABC News).

According to Jason Felch, an expert on the illicit antiquities trade and the author of the Chasing Aphrodite book and website, the vast majority of antiquities in museums or galleries around the world were originally looted.

However, he said there were legal and ethical differences between looting centuries ago and more recently.

“If you buy a piece that was illegally excavated 100 years ago, the thinking goes that you are not actively encouraging criminal behaviour today,” he said.

“But because there’s no black and white line between what’s looted 100 years ago and what we did last week, 1970 is the agreed upon cut off.

“It’s a gentleman’s agreement. It doesn’t have legal standing, but it has international recognition under a UNESCO [United Nations Educational, Scientific and Cultural Organization] convention.” 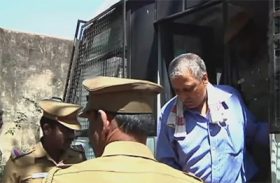 Disgraced art dealer Subhash Kapoor was arrested in 2011 and is still waiting to go on trial.(Four Corners).

Six of the eight pieces already repatriated were sold to the Australian institutions by the owner of Manhattan’s Art of the Past gallery, Subhash Kapoor, who is now in an Indian prison awaiting trial accused of running a global antiquities looting network.

The first was a different Dancing Shiva statue that the National Gallery of Australia bought from Art of the Past in 2008 for $5 million.

Mr Kapoor has maintained his innocence, despite an employee pleading guilty to charges relating to trafficking in stolen art.

‘All the other paperwork is equally fraudulent’

Indian antiquities sleuth Vijay Kumar, who had a hand in gathering evidence for most of the repatriations so far, has a list of 12 pieces still in the National Gallery of Australia (nine items) and Art Gallery of NSW (three items) that he says were looted from India around or after 1970. 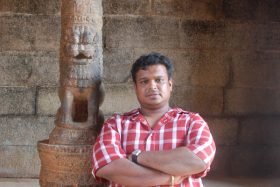 Nine of the 12 items on the list came from Mr Kapoor’s Art of the Past gallery. obvious that some of them had been fraudulently removed from India because they had basically the same paperwork as items that had already been repatriated.

Mr Kumar, the author of The Idol Thief and co-founder of the India Pride Project, said it was obvious that some of them had been fraudulently removed from India because they had basically the same paperwork as items that had already been repatriated.

“You can see Kapoor using the same people and businesses over and over again,” he said.

He said he found the attitude of the Australian institutions “very strange”.

“They are only returning objects that we can clearly prove from where it was stolen with [photographic] evidence but all the other paperwork is equally fraudulent,” he said.

“But unfortunately, so far we have not been able to find in situ photographs [for the rest].”

At least one of the items Australia has returned to India had links to international art collector Douglas Latchford, who died last year, eight months after being indicted by the New York Attorney-General’s office on charges of wire fraud, smuggling and conspiracy.

He was accused of misrepresenting the provenance of antiquities and falsifying documents to conceal that they were the product of looting, smuggling and unauthorised excavation.

Mr Latchford was a Bangkok-based UK expat who, from the 1970s on, supplied major auction houses, art dealers and museums around the world with South-East Asian antiquities.

According to the New York DA, one of the items returned to India by the NGA in 2015 — a 2000-year-old Seated Buddha statue — had passed through the hands of Mr Latchford.

Mr Felch said that any link to Mr Latchford should be a “big red flag” for a museum.

Anyone in possession of objects linked to Mr Latchford had a “clear moral, ethical and legal obligation” to scrutinise them for signs of false provenance and if found consider the return of those objects to the country of origin, he said.

“Latchford was a notorious trafficker of looted antiquities,” he said.

“He made a career of it over multiple decades.”

Last month, The Australian revealed that there was at least one more significant acquisition still in the NGA’s collection linked to Mr Latchford.

According to the NGA’s website, the Bodhisattva Avalokiteshvara Padmapani with attendants — a  series of three century gilt bronze statues made in the 9th or 10th century by the Cham people in what is now southern Vietnam — was acquired by the gallery in 2011.

“With its elaborate halo and extensive gilding, it is the finest and most intact Cham bronze known,” says the NGA’s website.
The Australian’s Michaela Boland reported she had discovered a reference to the statues in a chapter by John Guy in the book The Cham of Vietnam.

Mr Guy, curator of South and Southeast Asian Art at New York’s Metropolitan Museum of Art, wrote that the provenances of the Padmapani with attendants were unclear “but it must be assumed that they were recovered by illicit diggers”.

He also states in the caption of a photo of the statues that they were in the “Douglas Latchford Collection UK”.

The NGA has declined to reveal who they acquired the Padmapani from, citing a deed of confidentiality.

The NGA said in a statement to the ABC it had “engaged with the author John Guy, who has not provided any further information regarding the assumption of illegal activity referred to in the book”.

Mr Guy did not respond to the ABC’s request for comment.

The NGA said the 2015 Crennan Review identified the Padmapani as having incomplete provenance and that the gallery had made inquiries as recommended.

“The works were not found to be associated with any known archaeological site in Vietnam, Laos or Cambodia,” the NGA said. 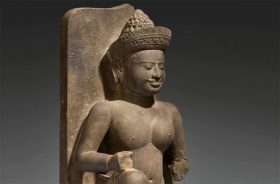 A 10th century standstone statue of the deity Ardhanarishvara that Douglas Latchford’s daughter has returned to Cambodia.(Royal Government Of Cambodia: Matthew Hollow).

Recent events may lead to more revelations about the history of these problematic antiquities.

Earlier this year, following Mr Latchford’s death, his daughter Nawapan Kriangsak revealed she was going to return his entire private collection of more than 100 Cambodian antiquities to Cambodia.

Cambodia’s Minister of Fine Arts and Culture, Phoeurng Sackona, said the government felt “immense joy” that their heritage was being returned.

“We recognise these cultural properties, such as statues of Ganesha, Vishnu and Shiva, as our ancestors,” she said.

“We see them coming home from a long journey. We believe these objects are, in fact, part of our flesh and blood and need to reconnect with our people.

“It is more than magic. It is like meeting again our ancestors who perished many centuries ago or a parent who disappeared during wartime and we assumed was no longer living.”

The Cambodian government is keen to re-establish rights over any pieces of its patrimony removed from the country illegally — which in their view is all of them.

“We take the view that every Khmer antiquity outside of Cambodia is, in fact, there illegally, unless it is covered by a loan or has been taken out with permission for scientific research,” Ms Sackona said.

She said Cambodia had co-operated with foreign museums to put on exhibitions and establish long-term loans and cited an agreement with the NGA as a good example.