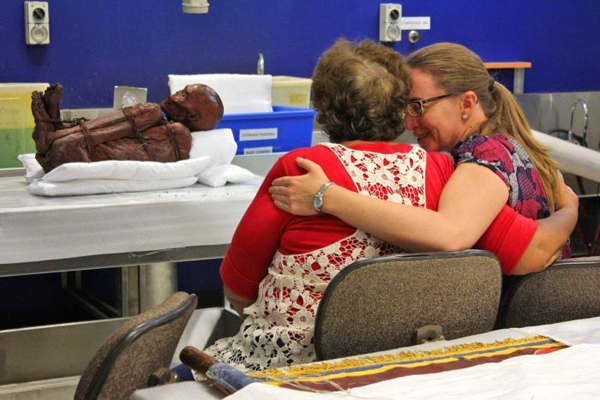 Aboriginal and Torres Strait Islander readers are advised this story contains images of people who have died.

Returning the mummified remains of Aboriginal man King Ng:tja to his family in Queensland has marked the next step in returning the deceased elder to country.

King Ng:tja (also known as Barry Clarke) was an elder of the Ngadjon-Jii people of Malanda in far north Queensland.

His mummified remains were removed from Australia in 1905 by German anthropologist Hermann Klaatsch, and have been in the possession of the Berlin Society for Anthropology, Ethnology and Prehistory for decades.

His body was returned to Australia in March, then transferred to the Museum of Tropical Queensland in Townsville.

On Friday about 20 members of King Ng:tja’s family held a smoking ceremony and viewed his body at the museum as part of his repatriation process.

Relief to have ancestor back home

Great, great, great grandson Robin Ketchell said it was very moving to have “Grandad Barry” back in Australia.

“Not sad, more of a happy grateful to see him back on country.”

Great, great granddaughter Vera Ketchell said the family learned of their ancestor’s whereabouts in the 1980s, but it was not until 2015 that they could start to negotiate his return.

“Today is a relief to know that we have now got him home in Australia,” Ms Ketchell said.

“We have done the first leg of the journey of bringing him back and seeing him being out of his box, and we now know we can work forward to finding him a resting place and taking him home to country.”