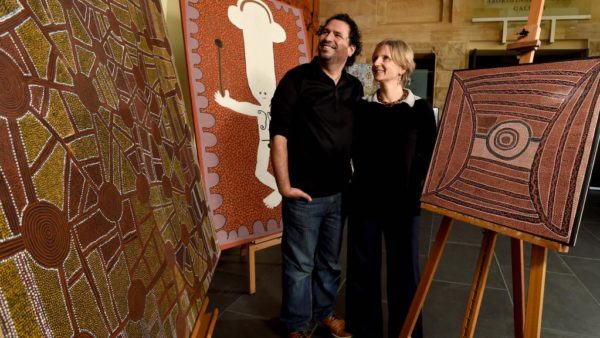 An art-loving jetset couple is so puzzled by contemporary Aboriginal art they are pouring $100,000 into research at the South Australian Museum.

Ever since Cillin Perera and Giuliana Picco fell in love with Aboriginal art they have devoured every bit of information they can find on the subject.

Their conclusion? More work needs to be done to understand the connections between the oldest extant civilisation on earth and its outpouring of contemporary art ….

“We were at a show in Darwin discussing the problem when we walked into John’s speech, and here was a man saying exactly the same thing,” said Mr Perera.

“We looked at each other and went ‘Oh, that’s what we have been looking for’,” said his partner, Ms Picco.

The “John” was John Carty, the head of anthropology at the SA Museum.

“I gave a rant in Darwin at the opening of an exhibition and explained where I thought the problems of art history in Aboriginal art were,” he said.

“I said that if you don’t engage with living artists, working in real time, it is hard to work out what their contemporary art is about. So that’s the urgency of my practice up until joining the museum and what I wanted to investigate.”

Perara and Picco met Carty and asked him if they could help.

At first the conversation was about a few thousand dollars, mostly to help fund the museum’s researchers to get into the field. But the pair decided that they would contribute $100,000 over five years towards the museum’s work as an initial donation.

Mr Perera said the funds would help produce books on the art of the Balgo people of the Tanami, the Spinifex artists at the junction of SA, Western Australia and Northern Territory and on industry issues. Studies of Aboriginal traditions and contemporary art have been difficult.

Mr Carty pointed out that while the SA Museum has the largest Aboriginal ethnographic collection in the world, galleries like the Art Gallery of SA have collected most of the contemporary Aboriginal art.

“Cillin and Giuliana’s vision gives us another angle through which to promote the discourse in Australia where museums and art galleries are not separate beasts, so we can actually bridge that divide,” he said.