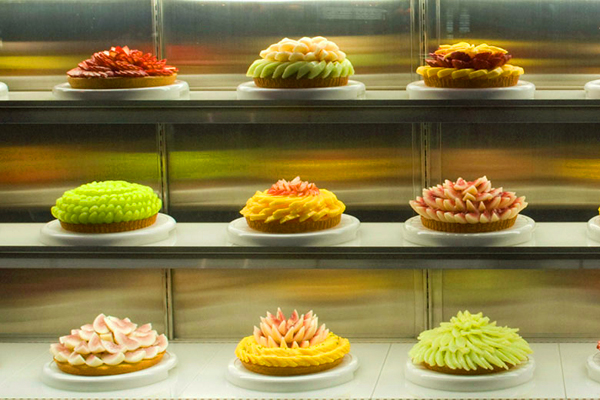 Suppose there was a wholly state-funded bakery, whose aim was to create world-class cakes and to encourage the development of excellent cake-baking. Everyone in the bakery – the master bakers, the managers, the kitchen assistants, the human resources consultants, the cleaners – is paid by the state. But the bakery is not allowed to give or sell the cakes directly to the public. Rather it is obliged to give, free of charge, all the best products to a number of “cake brokers”, each one specializing in a different kind of cake. These brokers are profit-making companies. To maintain baking standards, the brokers ask expert tasters from around the world to give their (unpaid) opinions on the quality of the cakes produced, ranking them and making recommendations about which should be released to the public. The brokers then put the best cakes in nice boxes and sell them back to state-funded “cake repositories” at a price they set themselves. Some cake repositories are free to use, but most of them give their cakes away only to their members, many of whom pay a fee of around £9,000 per year, or more. The cake brokers make a healthy profit and regularly raise their prices, knowing that no self-respecting cake repository would deprive its members of the best cakes in the world.

Whatever your views on the relationship between the public and private sectors, the role of the cake brokers in this story ought to strike you as implausible and outrageous. Surely no state-funded organization could ever be justified in giving away its money like this? Who could possibly agree to such a set-up?

Yet the story is broadly analogous to what happens in the publication of academic journals. Researchers in universities – most of whom in in Britain and other European countries are paid by the taxpayer, charities, foundations or the EU – explain their discoveries or ideas in academic papers, which they submit for publication in their preferred journal. The journal requests the opinions of other experts throughout the world – this is “peer review” – and these experts do this time-consuming work for no fee, as one of their normal professional duties. The journal then decides which of these papers to publish, prepares them for physical and/or electronic publication, and sells the journals back to the hundreds of libraries of state-funded (and private) institutions across the world.

The costs to the publisher are the payments to the editor and administrative staff, and the cost of copy-editing, printing and maintaining the computers on which the electronic texts are stored. Yet the prices they charge are staggering. Science journals are the most expensive, of course; it is understandable why they should be more expensive than humanities journals, since they often require colour printing and complex diagrams. Nature charges institutions a challenging €6,211 a year for a subscription. However, it is the world’s most cited academic publication, expertly edited and indispensable for any serious institution, so perhaps the price is defensible. Nature’s publisher, Springer Nature, publishes well over 2,000 titles, and many of its science journals cost more than €10,000 a year for an institutional subscription (some examples: Acta Mechanica is €10,103; Cell and Tissue Research is €10,574). But even their philosophy journals, all in black and white with no pictures, cost incomprehensible sums: Synthese, a decent enough journal but by no measure one of the best, costs institutions €3,797 a year. Just think of the number of university libraries in the world, and think of the number of journals Springer Nature publishes. Publishers will point out that many journals are now sold to libraries in bundles, which gives the libraries a discount on the individual prices; critics respond that this makes it more difficult for libraries to drop journals that have become too expensive or less significant.

The workings of this vast, multi-million-dollar machine are complex, and not all journals and publishers are the same. University presses (some of which, like those of Oxford and Cambridge, are charities) tend to charge lower prices, and some journal titles are owned by learned societies who attempt to rein in the publishers’ greedy ambitions. Another interesting recent development is the move to “open access” (OA) publishing. Research Councils in the UK have for some years made it a requirement that all research they fund be made available free to all on publication. And only last month, a group of national research councils in Europe, with the support of the European Commission and the European Research Council, introduced “cOAlition S”, a resolution to require all the research they fund to be OA by 2020.

The journal publishers have responded to the open-access requirement by introducing an Article Processing Charge (APC), paid per article by the researcher or their institution, which allows articles to be available online to anyone. APCs can cost universities’ or individuals’ research budgets hundreds or even thousands of pounds per article. Once again, even with the open-access requirement, it is the journal publishers who are making a nice fat profit.

It will be interesting to see how the European “cOAlition S” resolution will affect these profits in the longish term. But as things currently stand, it’s hard to deny that journal publishing appears little better than a scam. It’s perhaps not an irrelevant fact that the great fraudster Robert Maxwell began his business career in academic publishing.

Who is making all this money? Ignoring the university presses – who should be excused from these criticisms here – the answer is depressingly predictable: corporations nested within other corporations, whose names are unmemorable acronyms and whose shareholders are (inter alia) private equity and venture capital firms. Take Springer Nature, for example. This was formed in 2015 out of a merger of the descendants of the nineteenth-century German publisher Springer Verlag and the publisher of Nature. Before the merger, the London-based private equity firm BC Partners had acquired a majority stake in Springer for more than $4 billion. BC Partners is listed on the internet as having around fifty employees.

Why do we – academics, universities, taxpayers – go along with this? This is a complex question, and many things will go into the answer. One part of the answer is that many journals have established their reputations over decades, and academic communities are reluctant to abandon these titles with their established infrastructure and back catalogues. Another part is the difficulty of initiating methods of research publication different from the journal system as it now is. In the TLS of October 27, 2017, Timothy Gowers, Professor of Mathematics at Cambridge – who has been a strong campaigner against the status quo in the world of academic journals – proposed a number of alternatives to the usual peer review structure. The trouble is that significant change requires a level of collective action and cooperation that seems to be beyond academics and universities, now so pitifully competing with one another for everything.

Tim Crane is a Professor of Philosophy at the Central European University and the Philosophy editor at the TLS. His book The Meaning of Belief was published earlier this year.