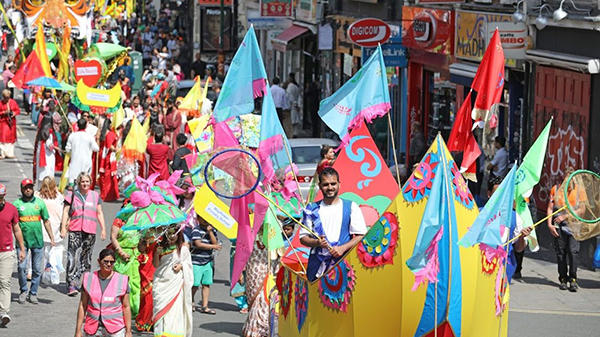 Cultural spaces such as museums, libraries and theatres are more sought-after than pubs and restaurants on England’s high streets, according to new research.

A report published this week by Arts Council England, A High Street Renaissance, found that people strongly support culture in their towns and cities, with 69% of respondents saying they thought having cultural spaces made their local area a better place to live.

Alongside shops, culture was the joint most popular answer when people were asked what they’d like to see more of on their high street.

The research was conducted earlier this summer by BOP Consulting to examine public attitudes to culture and the role it could play in regenerating crisis-hit high streets after the pandemic.

The report found that culture has weathered the pandemic better than the retail sector, which saw more than 17,500 chain store outlets close in 2020 and in-store sales 25% below pre-crisis levels in August 2020.

The report pointed to the potential of culture to draw people back to the high streets for in-person experiences. “Culture makes high streets more than places to spend money and – especially when deployed in effective partnership with other amenities – can retain local vibrancy, footfall, and pride,” said the report.

The research found that cultural spaces like museums have a strong presence on England’s high streets: 18% of the arts council’s regularly funded museums are located on high streets and 63% are within a five-minute walk of a high street.

The report detailed evidence of the impact of culture on local economies; Derby’s conservation areas saw a 12-15% rise in footfall between 2008 and 2013, despite average footfall dropping by 26% nationwide during that time. The city has invested millions in reviving its historic shopping streets.

Meanwhile 92% of visitors to Lincoln’s Great Magna Carta weekend in 2015 say that the festival inspired them to return to the city, and 18% of festival-goers spent more than £100 on retail and hospitality in the city.

However the research found that only 29% of people expect to see more culture on their high streets in the coming years, which the report said showed “a need for further support to meet public demand and help regenerate local economies in the aftermath of the pandemic”.

The report said the pandemic had “strengthened the case for the high street as a multi-functional hub” and called for the UK Government to prioritise culture in its post-pandemic recovery planning.

“Government action, especially the Culture Recovery Fund, helped preserve the cultural sector through Covid-19,” said the report. “These organisations now need to be adequately resourced to grow in a new context and to fulfil culture’s role on multifunctional high streets.”

ACE chief executive Darren Henley said: “As we begin to emerge from the pandemic, cultural organisations will be essential in bringing visitors back to high streets, helping to drive economic growth, boost community pride and promote wellbeing in villages, towns and cities across the country. We must do everything we can to ensure that cultural organisations are well equipped to play this vital role in our national recovery.”