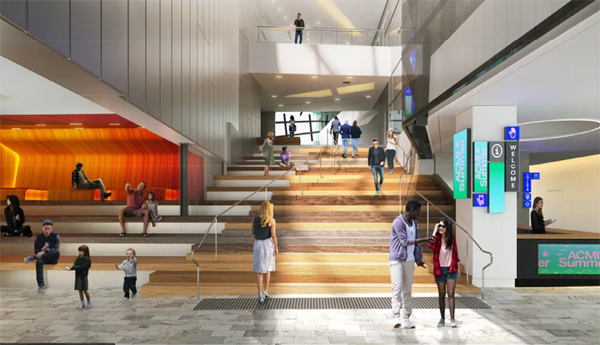 The ancient Greek agora, or public gathering space, has informed the design of the redevelopment of the Australian Centre for the Moving Image (ACMI) in Melbourne’s Federation Square. The project will be the first major update to the building since the Lab Architecture Studio and Bates Smart-designed museum was built in 2002.

ACMI appointed architects BKK to principally design the new public spaces, while exhibition and experience design firm Second Story was charged with the design of the new permanent galleries.

But, said BKK principal Tim Black, the two practices have established a true collaboration that has seen the cross-pollination of the work produced by the two design teams.

“All projects claim to be collaborative, but this has been a very interesting collaboration because we’ve worked so closely with Second Story,” he said.

“While ACMI appointed the architectural team and the experience and exhibition design team separately, the project governance was set up at a foundational level so that we’d have to work very closely together.”

In terms of an overall approach to the design, Black said, “We have always viewed the remaking or the renewal of ACMI as a really great opportunity to stitch together a whole range of functions that have already existed and operated extremely successfully within the Alfred Deakin Building but have always suffered from disconnection.”

“So one of the great challenges of the institution has always been the vertical separation between its various offerings.”

One way that BKK has tried to rectify this is through a massive timber staircase, which Black said was “much more than just a vertical connection, but actually includes a range of seating options that involve those moments of pause, those opportunities for people sitting alone waiting for others, or adjacent to strangers that might bring a conversation about, you know, having seen something in the Romanian film festival or whatever it might be.

He added that “the ‘living stair,’’ which is being developed in consultation with an accessibility consultant and ACMI’s internal universal access group, “really performs multiple roles.”

Beside the stair is a seating area that is a “continuation of the stair under the main cinema that in some ways provides a literal version of that third space. It’s an urban lounge room.”

Black noted that there are very few public buildings that are designed to invite use by the public. Traditionally, public libraries fulfilled this role, but “There’s not many of them within our cities.”

When asked about how passers-by would be drawn from Federation Square and Flinders Street into these public spaces, Black said that a new shop front on the building’s northeast corner, which looks out on to Flinders Street, “really aims to open up ACMI,” while a new entry door will create an east-west connection through the ground floor foyer.

Critically, BKK wanted to use the redesign “to really create a better social function and connection between people and to invite [them to] dwell within the space.”