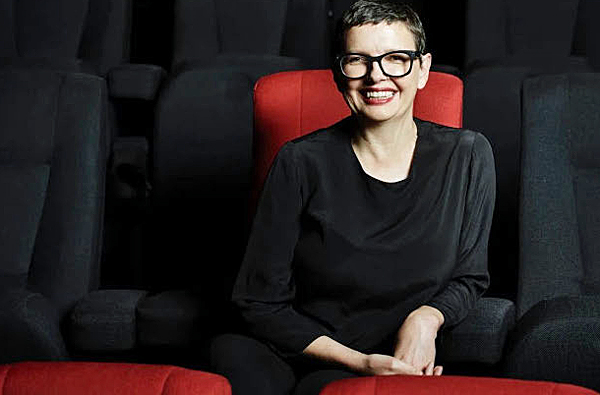 Clowning led to street theatre which led to performing with the Etcetera Theatre Company, and freelancing in theatre, film and television, “dying in a number of leading soap operas”, as Sedgwick puts it in her CV.  Photo: Kristoffer Paulsen.

In her 50th birthday speech, delivered in the backyard of her inner-Melbourne home, Katrina Sedgwick thanked a man forever associated with a pair of snug pink shorts, the late South Australian premier Don Dunstan.

Sedgwick, born in Sydney in 1967, moved to Adelaide aged two, growing up in the 1970s during the so-called Dunstan decade. As bold politically as he was sartorially, Dunstan championed Aboriginal land rights, helped end the White Australia Policy, and promoted the arts. The young Sedgwick thrived in that cultural blossoming, and it shaped the course of her life, culminating in her current role as chief executive of the Australian Centre for the Moving Image (ACMI), where she is about to oversee a $40 million redevelopment.

“It was this very fruitful environment for young people to feel empowered and passionate about exploring a career in the arts, whatever that might be,” she says, when we meet at her Melbourne office.

For Sedgwick, that exploration started precociously early, aged nine, performing in Peter Weir’s surreal 1977 film The Last Wave, which was co-financed by the Dunstan-established South Australian Film Corporation. Sedgwick rubbed shoulders with international stars Richard Chamberlain and Olivia Hamnett, being cast as Sophie Burton, their oldest daughter, alongside Weir’s own child, Ingrid, whom Sedgwick resembled. But it was the charismatic Aboriginal actor David Gulpilil who left a lasting impression.

Two years later, Sedgwick, a soprano, joined the State Opera of South Australia Youth Company, thanks to another Dunstan government initiative. She benefited, too, from the intensive music programs introduced in schools during that time; at Marryatville High she had 10 music lessons a week.

“So many people of that era from my high school went on to have careers in the arts,” she says.

What she didn’t do was go to university – somewhat surprising for someone who, for the past two decades, has leapt from one high-powered arts gig to the next.

“I had fully intended to go, but life has offered all these unmissable opportunities that has meant I never got there,” she laughs. “No one has ever asked, and it’s clearly on my CV. My top schooling is year 12.”

‘Dying in a number of soap operas’

Faced with the choice of university or work as a clown, who wouldn’t jump at the latter? And that’s what she did. Clowning led to street theatre which lead to nine years performing with the Etcetera Theatre Company, and freelancing as an actor in theatre, film and television, “dying in a number of leading soap operas”, as she puts it in her CV. She appeared on E Street, A Country Practice, G.P., and co-hosted a weekly children’s program on Channel 10. Until it all came to a bruising end.

Clowning led to street theatre which led to performing with the Etcetera Theatre Company, and freelancing in theatre, film and television, “dying in a number of leading soap operas”, as Sedgwick puts it in her CV.

I went away for four months and when I came back my agent said to me that in that time – I think I was 26 – I’d gone from casting calls to play the younger girl, to playing the mother. And I just thought, that’s the writing on the wall. If this is what it’s like at 26, what’s it going to be like at 36, and certainly what’s it going to be like at 46? Over two or three years I grieved and gradually came to the understanding that I needed to change my career.”

She thought about what she loved – working with artists, bringing their ideas to fruition, travelling, and working across different art forms – and it added up to the festival circuit, where she has clocked up an intimidating list of achievements.

She was co-founder and co-director of the Sydney Fringe, creative producer of two Adelaide Festivals, artistic director of the 2002 Adelaide Fringe, and, as the founding director and chief executive of the Adelaide Film Festival and its associated $1 million investment fund, she commissioned internationally acclaimed Australian films including Samson and Delilah, Look Both Ways, Ten Canoes, and Snowtown​, nurturing another generation of artists.

Since arriving at ACMI in February 2015 (after two years as head of arts for ABC TV and ABC Arts online), Sedgwick has been developing a new vision for the 17-year-old centre, which has the sprawling task of being the national museum of film, television, video games, digital culture and art.

Last financial year the museum attracted a record 1.55 million visitors – but it’s due for a revamp. ACMI has never sat comfortably in its allotted building at Melbourne’s Federation Square, spread over four poorly connected floors, and its permanent exhibition, Screen Worlds, which launched 10 years ago, was conceived before the advent of the smartphone. Somewhat embarrassingly, its history of the moving image ends with an iPhone 3 encased in a glass dome.

“What has changed since then is astonishing, in terms of the impact and power of the moving image,” Sedgwick says. “No one could have anticipated what it’s doing to every single level of our lives.”

ACMI closes in May and will re-open late this year with a new permanent exhibition interpreting the moving image from its origins in shadow and light play to today’s leading-edge technologies such as virtual reality. The cinemas and café will be upgraded, the centre’s layout completely revised, and the shopping mall-like escalators of ACMI’s bleak Flinders Street-facing foyer superseded by a brighter entrance, with stairs leading invitingly to upper levels.

A huge mock $36 million cheque from the Victorian government sits on a shelf behind Sedgwick’s desk – the money is contingent on ACMI raising a further $5 million for the redevelopment. Steering this huge ship into new waters won’t be easy, but those early years in theatre have given Sedgwick the resourcefulness and entrepreneurial spirit to get through.

“It was the best training you could have for the job I have now, actually.”