You are here: Home » Articles filed under: 'News' » Article: 'ACMI from shadows to screens'

ACMI from shadows to screens 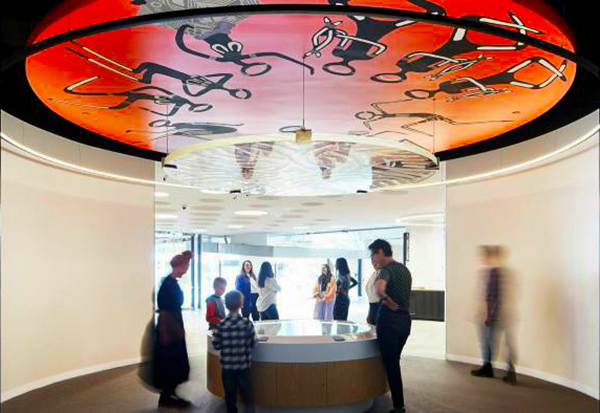 Jamie Smyth, From shadows to screens at the Australian Centre for the Moving Image, Financial Times, 10 March 2021

It sounds incongruous to place an ancient culture at the centre of a flagship exhibition to relaunch Australia’s national museum of cinema, television and digital technologies. But the artwork by indigenous artist Vicki Couzens is spot on. A 300kg acrylic lens suspended from the ceiling allows the images of Aboriginal dancers to appear to be leaping in mid-air using light and shadow techniques that have played a major role in storytelling, well before the advent of modern technologies.

Australia’s indigenous people have painted their bodies, used campfires and dance to spark imagination and share their stories. Now this work, titled “Yanmeeyarr”, which means “flickering in the firelight” in the artist’s native language, provides a dramatic entry point for visitors to the newly refurbished museum, after a A$40m investment.

The Story of the Moving Image exhibition offers a bit of everything: ancient shadow puppets for the history buffs; a life-size souped-up Ford Falcon driven by Mad Max for movie aficionados; the chance to play the 1980s Dragon’s Lair arcade game, a cult classic for middle-aged gamers. 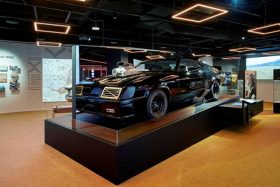 Among the exhibits is a replica of the Ford Falcon V8 Interceptor used in the ‘Mad Max’ film © Shannon McGrath.

Sprawling across 1,600 square metres, the exhibition also provides a window into the world of deep fakes, propaganda, truth in media, and the latest digital platforms, such as TikTok.

“What’s exciting about directing a museum like this is that blend of all of these things. I think it’s kind of old-fashioned now to talk about high culture and low culture.”

Almost 15m people have visited ACMI since it opened in 2002, making it one of the most visited attractions in Australia. Located in Federation Square, a civic centre and cultural precinct in the heart of Melbourne, the centre is a museum of film, video games, digital culture and art. But it also doubles as an education, events and cinema space, which makes it a popular hang-out for 15- to 35-year-olds.

Sedgwick, whose first job out of school was with a travelling clown company, has been a trailblazer in arts administration down under, co-founding the Sydney Fringe Festival in 1995 and founding the Adelaide Film Festival in 2002. By the time she joined ACMI as director in 2015, the centre was attracting almost 1.5m visitors a year but was in need of a complete overhaul. 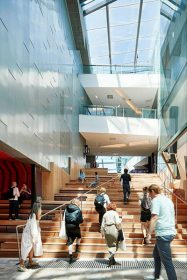 The museum’s layout and public spaces have been redesigned © Shannon McGrath.

“It was clear we needed to get funding to upgrade our free permanent exhibition, which was nearly 10 years old by the time it closed [in 2018],” says Sedgwick.

“The exhibition started with the words ‘1991 to the present day’ but then there was a glass dome with an iPhone 3 [which launched in 2008] sitting in it,” she laughs.

Rather than simply upgrade the permanent exhibition, Sedgwick lobbied the state government in Victoria for a major funding pledge to enable a complete overhaul of the museum.

“There were a lot of quite serious challenges with the museum because of its verticality across four floors; it felt very fractured. It didn’t feel like a coherent whole, it felt like a series of parts. It didn’t feel welcoming: the foyer spaces were quite cold. We just hadn’t invested in the public space and it didn’t feel warm and welcoming.”

The result is visually stunning, with a “living staircase” sweeping up through the building from an entrance on Flinders street — one of Melbourne’s main thoroughfares — to another entrance on Federation Square. The staircase morphs into a communal seating area, where Sedgwick sits down to explain how they managed to persuade the Victorian government to part with A$36m to pay for the majority of renovation.

“We are very fortunate in Victoria to have a government that understands that culture is a core part of the identity of this city and state and needs investment,” says Sedgwick, who cites the museum’s track record as a magnet for tourism. 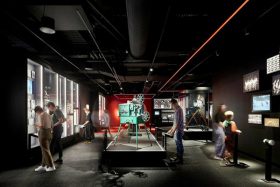 The museum’s layout and public spaces have been redesigned © Shannon McGrath.

In order to continue to draw in crowds and supplement the centre’s income, ACMI teamed up with Melbourne chef Karen Martini to develop a new wine bar and restaurant named Hero; a new gift shop has also been added.

Like most arts and entertainment attractions worldwide, ACMI faces the challenge of coexisting with Covid-19. Prior to the pandemic, around half of ACMI’s visitors lived outside Melbourne. With Australia’s international borders still shut due to the pandemic and state borders periodically closing due to Covid-19 outbreaks, the museum cannot rely on tourists in the short term to drive visitor numbers.