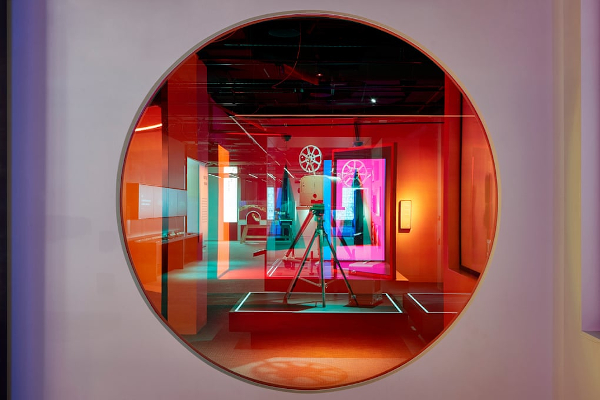 Acmi has always been a fluid space, but the two-year refurbishment has been its biggest renewal yet. Photograph: Shannon McGrath.

Luke Buckmaster, A portal into other worlds: Melbourne’s Acmi reopens after $40m overhaul, The Guardian, 11 February 2021

From virtual reality and optical illusions to home videos projected into your palm, the reinvented Australian Centre for the Moving Image celebrates old and new.

For digital media connoisseurs there is something wonderful – many things actually – about having the Australian Centre for the Moving Image (Acmi) situated smack-bang in the heart of Melbourne CBD. It’s a place, but it’s also a portal.

Acmi opens again on Thursday after a $40m redevelopment that took almost two years, with a brand new permanent exhibition featuring transformed installations and spaces and a staircase that morphs into amphitheatre-type communal seating: a new rival to the beloved meeting spot across the road, under the clock at Flinders Street Station.

But it’s also a door into many other worlds and experiences and creations – from figures dancing in the flickering light of old projectors, to the immersive domains of virtual and augmented realities.

“We shape our buildings, and afterwards our buildings shape us”, Winston Churchill once said, commenting on architecture’s power to inspire and transform long after the paint has dried. One gets the sense this reflexive relationship is what the Acmi director and CEO, Katrina Sedgwick, intends: to let artists and the public shape this space, and entrusting the interplay between them to recast the city in a different light. 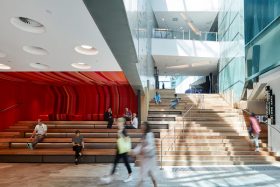 ‘It’s a place, but it’s also a portal’: Acmi’s new staircase will rival the beloved meeting spot under the clock across the road. Photograph: Shannon McGrath. 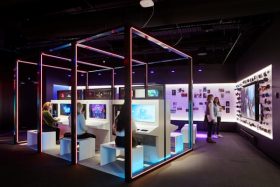 A week before the refurbished exhibition officially reopens, when Sedgwick meets the Guardian there for a tour, the place is abuzz with activity as staff and contractors undertake final preparations. There are window cleaners, technicians, delivery people unloading boxes from a van, painters applying finishing touches. Acmi has always been a fluid space, with items rotated or replaced year after year in its permanent exhibition, but this is the biggest overhaul in the building’s history.

In the entrance area to Acmi’s new centrepiece exhibition, The Story of the Moving Image, a virtual reality headset lies next to a View-Master from the 1950s and a stereo viewer stereoscope from 1900, encased under glass. This juxtaposition of old and new is the first hint of a foundational theme that has been woven throughout.

Above them is a piece from Gunditjmara Keerray Woorroong artist Vicki Couzens: a painting of dancers on a disc on the ceiling, with an acrylic lens beneath it that – as you walk and look up – makes the dancers appear to be moving. Indigenous content is strewn throughout the exhibition, not just tacked together to a particular area, following the guidance of an Indigenous advisory group. 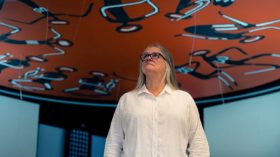 Vicki Couzens beneath her artwork at Acmi. Photograph: Michael Torres. 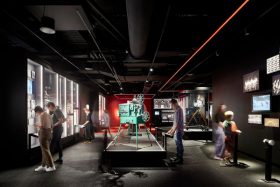 Upon arrival visitors are given a piece of circular cardboard, which the museum calls a “Lens”, to press against the wall labels (they emit a satisfying blue glow), which uploads information and media to a personally curated folder in the cloud, accessible from any web browser. Near the entrance is a screen which, if you dance in front of it, projects your exact movements but with your body in the form of slightly creepy digital shadows – with a hand-drawn, Babadookian look. It’s a funhouse version of the virtual self, bringing to mind the words of new media artists Monika Fleischmann and Wolfgang Strauss, who, in the 1990s, discussing how viewers now occupy as well as look at images, proposed a different take on René Descartes’ famous thoughts about consciousness: “I am in the picture – therefore I am.”

One of the first works is Taree Mackenzie’s beautiful contemporary version – using sumptuous cyan and red panels – of an old illusion known as Pepper’s Ghost, which uses reflections cast on a glass screen to generate an apparition. “It’s about light, colour, shadows, illusion,” says the chief curator, Sarah Tutton. “We want to make the point that these principles from the past are still relevant to artists today.” 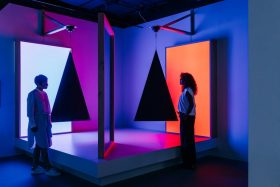 Nearby are lots of old projectors, as well as various proto-projectors, such as the toupie-fantoche or “spinning top” from 1881. Using a handle that triggers a pyramid arrangement of mirrors, these machines reflect rapid images that provide the impression of a moving picture. There are hands-on replicas for visitors to play with, the precious original artefacts kept behind glass.

This part of the exhibition is a way of countering the idea that moving pictures began with the motion picture, a term of course used interchangeably with “movies” and “films”. The point is that no art form is suddenly willed into existence; innumerable elements coalesce to form the author’s page, the painter’s canvas, the cinematographer’s camera, the game designer’s console.

In a small dark room there is a stunning reinvention of the zoetrope (created by Studio MDHR), a device invented in the 1800s. When this machine, shaped like a very large layered cake, starts spinning, it brings to life characters from the recent video game Cuphead, which itself is a combination of old and new, using hand-drawn illustrations to replicate the aesthetic of Disney cartoons from the 1930s. 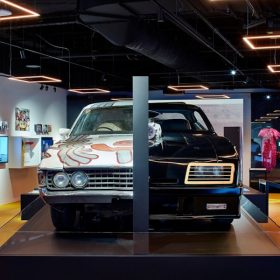 Elsewhere a wall of black cartridges can be arranged to trigger custom-made video sequences comprised of iconic movie lines; a collection of gorgeous diorama-like spaces (conceived by set designer Graham McGuffie and built by miniaturist Emily Boutard) depict Australian lounge rooms in different decades, positioned inside TV sets; there’s a prop car (created by Francis Jupurrula Kelly and Thomas Rice) that’s half Mad Max’s Interceptor and half a vehicle from the cult TV show Bush Mechanics; and a section dedicated to the great Indigenous actor and activist Gary Foley, which includes the jacket he wore in Dogs in Space.

There are also many video game consoles to play (plus four arcade machines), an interactive booth where you can make your own sound effects, and a screening room playing an experimental triptych film, Raumlichtkunst, first shown in Germany in 1926. 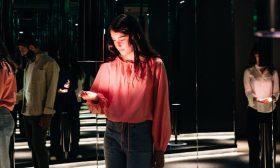 In a nod to the ‘fragility and preciousness of home movies’, the Memory Garden will project them into your palm. Photograph: Adam Gibson.

The Memory Garden projects home videos onto your hands in order to – as Sedgwick tells me – “play with the fragility and preciousness of home movies”. But it isn’t quite ready on my visit; a couple of technicians are fidgeting with various bits and pieces. It serves as an unintended analogy to another theme: the celebration of work in progress.

Upstairs, outside the new media preservation lab, where conservators can now be observed working in their offices behind a glass window (almost, in a sense, a piece of performance art), I am told by the chief experience officer, Seb Chan, that the object I am admiring – a hard drive containing a copy of the 2018 experimental film Terror Nullius – is “more fragile than if it were on 70-year-old celluloid. The lifespan of a hard drive is three to five years. They are super fragile. If we lose a byte from a file, it can be corrupted forever.”

The process of conserving and restoring art is never-ending; a constant catch up to a destination that can never be reached. The prospect of losing art is frightening, but there’s a lovely reciprocal relationship at play: the art provides something for a person and the person feeds back into the art. A little like the reciprocal relationship of the building itself: we shape it, and afterwards it shapes us.

• Acmi has reopened in Melbourne