April 15th, 2021 | Browse other: News. | Tagged with: Australian Centre of the Moving Image, Cuphead's Bringing Its Animation Style To Life At Australia Museum | 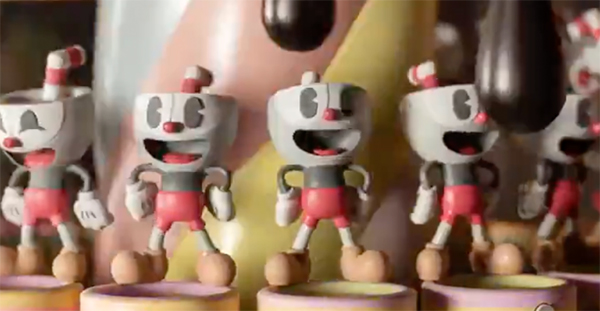 Studio MDHR, developer of the indie run and gun game Cuphead, has unveiled a new museum exhibit dedicated to the game and its art style.

Studio MDHR, developer of retro-styled run and gun game Cuphead, has revealed a museum exhibit based on the popular title. The indie game, which released back in 2017, is inspired by the classic art style used during the 1960s’ “golden age of animation.” Studio MDHR was founded by two brothers, Chad and Jared Moldenhauer.

Despite releasing more than three years ago, Cuphead still remains a recognizable and iconic indie title. Earlier this year the game crossed over with fellow indie title Fall Guys: Ultimate Knockout, a platforming battle royale game developed by Mediatonic. In February the two indie titans met in the form of Cuphead skins in Fall Guys, allowing players to battle it out as either Cuphead or his sidekick Mugman. Another recent Cuphead crossover was created by fans, with the entire cast of Super Smash Bros. Ultimate being drawn in the retro run and gun game’s signature art style.

Cuphead developer Studio MDHR recently showed off, via Twitter, a new Cuphead-inspired museum exhibit coming to the Australian Centre of the Moving Image. The national museum contains exhibits dedicated to film, video games, digital culture and art. ACMI’s Cuphead exhibit will take the form of a zoetrope, a pre-film animation device that creates the illusion of motion, featuring 3D-printed models and using strobe lights to create the motion effect. The exhibit will be held in ACMI for the next decade, ensuring that Cuphead maintains its place in video game history. 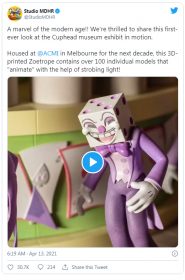 In 2018 Studio MDHR announced a downloadable content expansion for Cuphead, titled The Delicious Last Course, but this expansion has been repeatedly delayed. Late last year the DLC was delayed yet again, this time indefinitely, due in large part to the COVID-19 pandemic delaying development. While the developer ensured fans that they would be thrilled by the final product, no new release window was given for The Delicious Last Course. More than three years after the first game’s release fans have also begun to ask about a potential sequel, though Studio MDHR has not yet commented on the possibility of a Cuphead 2.

The Cuphead exhibit at the Australian Centre of the Moving Image looks amazing, bringing the game’s uniquely retro art style to life using appropriately old-school animation techniques. The title has left a big impact on the gaming community, particularly for indie developers who dream of having their projects played by gamers around the world. With the ACMI exhibit being set up for a ten-year lifespan, fans from across the world will have plenty of time to see the exhibit.