You are here: Home » Articles filed under: 'News' » Article: 'Across the millennia' 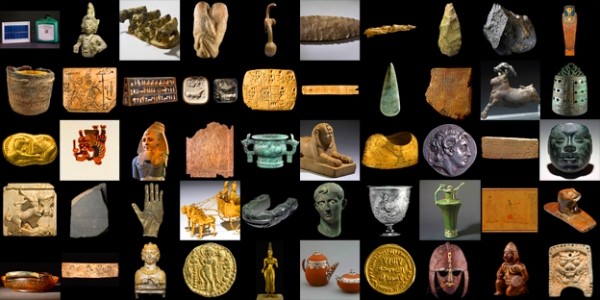 A selection of objects from A History of the World in 100 Objects. Source: British Museum.

Stephen Bevis, Across the millennia in 100 treasures, The West Australian, 12 February 2016

Some of the British Museum’s most significant artefacts have arrived in Perth for the last big exhibition at the WA Museum before the Perth facility closes in June for four years.

A History of the World in 100 Objects, which spans two million years of human life from the Stone Age to the Space Age, opens tomorrow.

“This is a once-in-a lifetime experience,” British Museum research manager JD Hill said of the objects that could not even been seen together at the London institution.

They include the first stone-cutting tools, the famous 4000-year-old Mesopotamia clay Flood Tablet telling the story of the Ark, a trove of plundered Viking silverware and an Inca gold llama.

“They would not be displayed at the same time,” Dr Hill said. “You have got here in one room some of the key highlights of the British Museum.”

Exclusive to the Australian tour to Perth and the National Museum of Australia in Canberra is an oversized bronze head of the Roman emperor Augustus.

The collection arrived in two shipments and sat in the museum’s gallery to acclimatise and settle before unpacking, he said.

The exhibition had stemmed from the BBC’s A History of the World in 100 Objects radio series, book and TV documentary.

See also: Rosemary Neill, Neil MacGregor on A History of the World in 100 Objects, The Australian , 12 February 2016