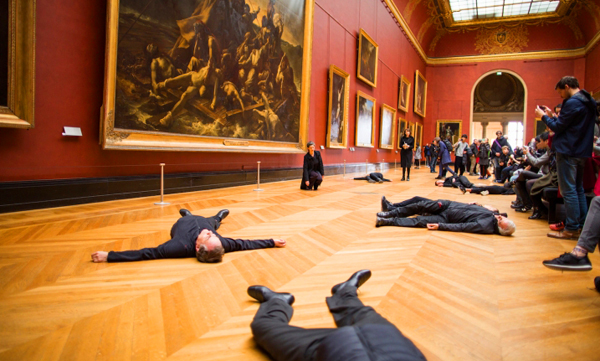 In a protest performance on Monday, activists collapsed at the foot of “Raft of the Medusa” to call attention to museum sponsor Total’s climate change complicity.

On Monday morning, visitors to the Louvre were treated to an unexpected spectacle as a group of activists fell to the floor in front of Théodore Géricault’s famous painting, “The Raft of the Medusa” (1818–19), extending its vivid scene of disaster on the high seas into the gallery. The performance protest was created by Libérons le Louvre, and as more performers keeled over, others listed the current endeavors of one of the Louvre’s most visible corporate sponsors, energy giant Total.

“Total, Alberta, Canada,” began one chant, alluding to the French multinational’s activities in western Canada. “Tar sands. Drying up of rivers. Emission of greenhouse gases. Indigenous populations threatened. The Louvre supports Total!” After about 10 minutes, the museum’s security personnel evacuated the gallery, which the group of 10 to 15 activists occupied for a full two hours.

“The goal of the performance was really to push the museum to react, because so far they have remained silent following the various performances that took place last year,” Libérons le Louvre member Clémence Dubois told Hyperallergic, referring to previous actions at the museum in 2017. “It was really to escalate the campaign because climate change is escalating as well. We know that it’s urgent that the world breaks its ties with the fossil fuel industry because they are corrupting our politicians, they are blocking the energy transition by exploring new fossil fuel extraction processes.”

“The Raft of the Medusa,” which depicts the grisly aftermath of a historical shipwreck, was chosen as a backdrop for the performance because it evokes climate change’s displacement of vulnerable communities through rising sea levels and other ecological crises, Libérons le Louvre explained in a statement. The group has launched a petition calling on the Louvre to drop its sponsorship agreement with Total. Hyperallergic reached out to the museum and a spokesperson for the Louvre declined to comment on Monday’s action.

Though the terms of Total’s sponsorship agreement with the Louvre are not publicly known, the energy company has helped fund many major projects at the Louvre since becoming a corporate partner in the mid 2000s. Its contributions have helped fund the restoration of the Galerie d’Apollon in 2004, the creation of the Islamic art department in 2012, and the opening of the Louvre-Lens the same year.