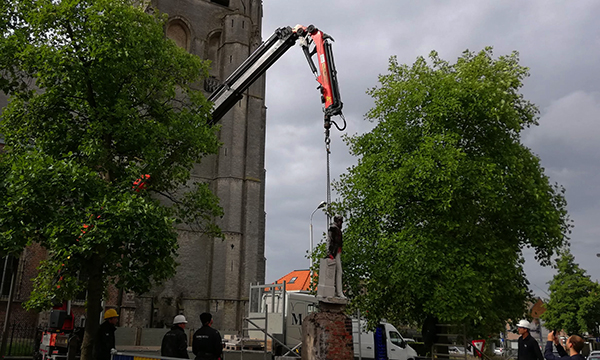 Statues of Christopher Columbus, King Leopold II of Belgium and a hero of Irish nationalism could be the next to fall as the campaign against symbols of racism and colonialism spreads around the world.

Activists have organised petitions – and in one case set a statue on fire – to remove monuments to historic figures tainted by racism or slavery.

None have gone as far as the group in Bristol that tumbled a statue of Edward Colston into the harbour on Sunday but they are pushing authorities to act in solidarity with protests in the United States over the killing of George Floyd by a white police officer.

The targets are disparate – their lives separated by continents and centuries – but they share a common fate of once being revered and now falling into controversy, even disgrace.

Belgian authorities in Antwerp took down a statue of Leopold II on Wednesday after it was set on fire and daubed with paint. It is being taken to a museum in the Flemish capital for restoration and is unlikely to be returned to its original spot. 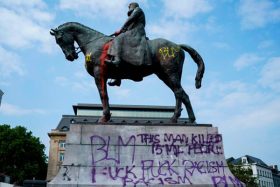 Across Belgium the Black Lives Matter protests have reignited the campaign to remove statues of Leopold II, whose brutal and rapacious rule of Congo is estimated by historians to have caused the deaths of 10m people.

A group called Repair History has launched a petition calling on Brussels city authorities to remove all statutes of the king by 30 June, the 60th anniversary of Congo’s independence from Belgium.

By Thursday more than 68,000 people had signed the petition, which describes Leopold II as an executioner. “In the space of 23 years this man killed 10 million people without stepping foot in Congo. For 23 years, he treated the Congolese people as chattels for the production of rubber, which was very valuable at the time.” Pascal Smet, state secretary for heritage in the Brussels region, promised to launch a debate on the statues.

In Northern Ireland, there is a petition to replace a statue of John Mitchel, a leader against British rule in the 19th century, because of his support for slavery in the US. “His statue does not deserve a place of honour in Newry City centre,” said petition organisers.

They suggest replacing it with a new work of art commemorating African people and those of African descent who endured and resisted slavery. They also wish to rename John Mitchel Place as Black Lives Matter Plaza. 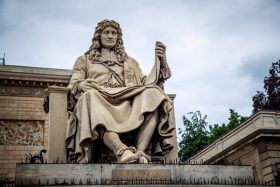 In the Republic of Ireland, police are investigating the daubing of black paint on a monument to Christopher Columbus in Galway – a gift from the city of Genoa. Earlier this week the leftwing group People Before Profit urged authorities to remove the sculpture.

“It would be more appropriate for a memorial that acknowledges Galway’s role in the slave trade that followed Columbus’ voyage to the Americas,” said the group. It also wants to remove a plaque in nearby Tuam to Major Richard Dowling, who served as a Confederate artillery officer during the American civil war.

In France attention has focused on Jean-Baptiste Colbert, a minister of Sun King Louis XIV in the 17th century who is honoured with multiple statues and his name on streets, boulevards and avenues. Colbert founded the French West India Company and wrote the Code Noir (Black Code) which regulated the life, death, purchase, religion and treatment of slaves in French colonies.

Campaigners in Spain hope to reinvigorate a previous effort to remove a statue of Columbus in Barcelona, arguing it glorifies the conquest of America. In 2018 the city council removed a statue of the merchant and slave trader Antonio López y López, Marquis of Comillas, saying he made his fortune trafficking Africans to Cuba. 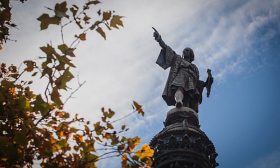 Monument activism is not confined to Europe. In Brazil, activists have suggested pulling down a statue of Manuel de Borba Gato in São Paulo. Borba Gato was a Brazilian bandeirante (explorer) and outlaw who roamed the country’s little-explored interior in the late 17th century, capturing indigenous inhabitants who were forced to work as slaves, making him a personal fortune.

For all Borba Gato’s crimes, the Brazilian historian Laurentino Gomes said he opposed the idea. “Statues, buildings, palaces and other monuments are part of our historical heritage. They should be preserved as objects for study and reflection,” Gomes tweeted.