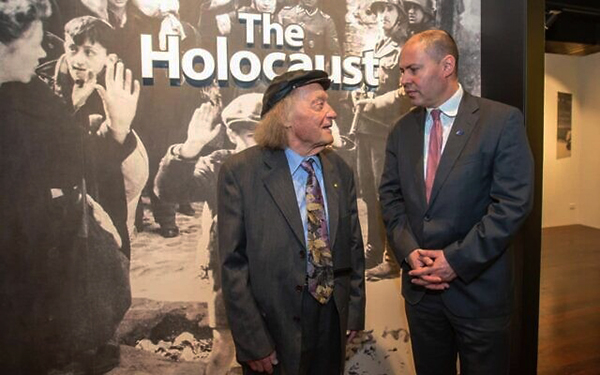 ‘By telling the stories of the Holocaust, the museum will educate and inspire South Australians to stand up against antisemitism and racism’.

THE federal government has announced $2.5 million for the further development of the Adelaide Holocaust Museum, which is set to open next month, just weeks after rolling out $3.5 million to build a Holocaust museum in Brisbane, as reported in The AJN.

After the visit, Frydenberg posted on Facebook that the federal and South Australian governments “are partnering to educate children, teachers & future generations about the atrocities of the Holocaust”.

Frydenberg stated separately the museum would “allow every South Australian child to learn about this tragic period … about the importance of tolerance and humanity”. 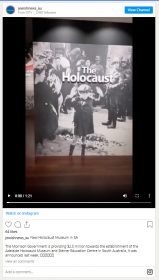 Federal Education Minister Dan Tehan said AHMSEC would enable students, teachers, and adults to better understand the Holocaust, while South Australian Premier Steve Marshall added, “People of all ages, and particularly our young people, must learn about this dark period.”

South Australian Senator Stirling Griff told The AJN, “It is fitting that in the year of the 75th anniversary of the end of World War II, the Australian government has pledged to join other donors to help establish this important museum in South Australia.”

The Centre Alliance senator, who last year moved a motion repudiating antisemitism and calling for more Holocaust education in schools, added, “Like many people of Jewish descent, I too have family who perished and family who survived the Holocaust … These stories are an important reminder to us all and the Adelaide Holocaust Museum is a fitting tribute.”

AHMSEC is inspired by Adelaide survivor and sculptor Andrew Steiner, who has offered Holocaust education to secondary and tertiary students for the past 30 years. 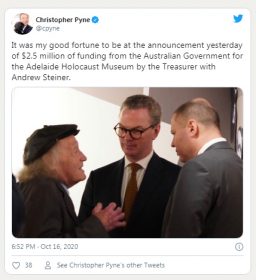 The 88-year-old who survived the Holocaust in Budapest told The AJN the grant is “a wonderful acknowledgment of our progress and our need for the future”, but emphasised it was for capital development and the museum still depends on supporters to develop its galleries and exhibitions.

Steiner, a longstanding congregant of Adelaide’s Beit Shalom Synagogue, was awarded an OAM for his sculpting on themes of human compassion, and his sculpture of heroic Shoah figure Dr Janusz Korczak, a teacher who sacrificed his life rather than abandon his pupils, is a highlight of the museum.

With support from the Catholic Archdiocese, AHMSEC is housed in the archdiocese’s historic Fennescey House, from where it offers education programs customised for the South Australian schools curriculum. It moved into the ground floor at the start of this year. The grant will help develop galleries on the second and third levels.

AHMSEC chair Nicola Zuckerman said, “Our program will demonstrate that antisemitism existed before the Holocaust, still exists today and is in fact, increasing in prevalence around the world.”

The centre’s director Kathy Baykitch reflected, “By telling the stories of the Holocaust, the museum will educate and inspire South Australians to stand up against antisemitism and racism.”

Jewish Community Council of South Australia president Annetay Henderson-Sapir told The AJN, “When it opens its doors in November, we look forward to the Adelaide Holocaust Museum furthering the interfaith and multicultural connections of the Jewish community in South Australia.”

Describing the grant as “a great morale booster for the small but vibrant Jewish community in South Australia”, Executive Council of Australian Jewry co-CEO Peter Wertheim stated, “Investing in the museum as an educational resource will enhance the community’s outreach and anti-prejudice programs in the wider community and especially in schools and professional development of teachers.”