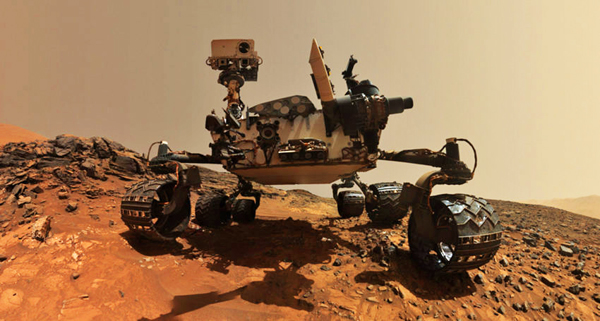 Programming a robot to move around a simulated Mars terrain is among dozens of activities at this week’s International Astronautical Congress aimed at inspiring thousands of children to embark on STEM careers.

About 600 students from years 5 to 10 will be part of the “Tickle my droid” program at the Adelaide Convention Centre during the space congress, which has attracted 4200 members of the global space industry including the heads of all the major space agencies and Space X founder Elon Musk.

The robot coding sessions, which begin today, are being run by the Victorian Space Science and Education Centre and are based on how NASA’s rovers are programmed for their Mars missions.

“The students will walk from one end of the convention centre to the other right through the commercial zone and past booths set up by mega aerospace companies like Airbus and Boeing,” Education Department Executive Leader Secondary Learning Rodney Mangos said.

“It’s a massive opportunity for these 600 students to see where STEM (science, technology, engineering and mathematics) can take them in the future.

“We’ve got to spark them young and let them know that science and maths are not just about text books and what happens in the classroom, it’s about the future of technology and the future of our world.”

The droid programming is one of 25 Education Department programs being run in conjunction with the State Library of South Australia and South Australian Museum during the September 25-29 conference.

In all, there are places for 3000 students and 795 for teachers at the mostly free sessions and some places are still available.

The museum and library are also hosting a number of space related exhibitions during the week.

The education program includes sessions on what it’s like to be an astronaut in space; searching for life on Mars; what do we know about the solar system and universe today; and what astronauts eat in space.

More than 100 Year 11 and 12 STEM students from 31 South Australian Government high schools are volunteering as ushers and guides for half a day each over the five days.

“It’s really an opportunity for them to envision their STEM future to see where their university degree in a STEM area can take them,” Mangos said.

About half of the education programs running in conjunction with the IAC are professional development courses for teachers to help them inspire students towards a STEM pathway. These cover a range of topics including digital technologies, STEM learning and coding and computational thinking.

“We want to use space to excite students about STEM and we realise that’s got to start in primary school,” Mangos said.

The first Australian-born astronaut in space Dr Andrew Thomas is patron of the South Australian Museum and is also the great-great-grandson of the museum’s first director, Frederick Waterhouse.

South Australian Museum Director Brian Oldman said Thomas had often spoken about being inspired to become an astronaut after visiting a space exhibition at the museum when he was a boy.

“What I would like to think is we can have that impact on some of the students who come to the museum during the course of the conference,” Oldman said.