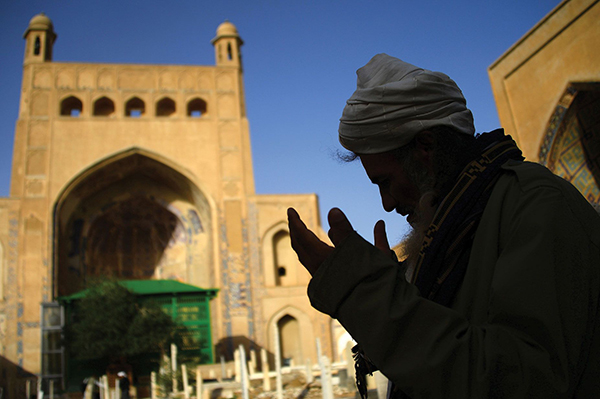 An Afghan man praying outside a mosque in Herat during Ramadan in 2018; there are fears that the devastating destruction of the country’s cultural heritage 20 years ago could return. Photo: Hoshang Hashimi/AFP via Getty Images.

From the Bamiyan Valley to an ancient spiritual centre of Zoroastrianism and Buddhism, former Unesco senior official Francesco Bandarin looks at the embattled country’s most important landmarks.

Afghanistan’s cultural heritage is vast and still partly unknown. For millennia, it has been a crossroads of many civilisations that have left a remarkable legacy, from the Medes and the Persians to the Greeks after Alexander the Great, and on to the Sasanians, Abassids, Ghaznavids, Ghurids, Mongols, Timurids, Mughals and Durrani, before the 19th-century rivalry between Russia and Britain, the Kingdom of Afghanistan, and finally the long period of conflict beginning in 1979.

The world of culture is anxiously wondering what will happen to this extraordinary heritage now the Taliban are back in power in Afghanistan. It is not difficult to imagine that there could be grave consequences for the control and conservation of the country’s important monuments and archaeological sites. The memory of the Taliban’s criminal destruction of the 1,500-year-old Buddhas of Bamiyan in March 2001 is still very much alive and viewed across the world as a prime example of barbarism against cultural heritage.

There are different factions within the new generation of Taliban fighters and if leaders are trying to reassure the international community of their moderate intentions, other more radical elements could reinstate the group’s brutal and oppressive regime of 20 years ago. In this situation, Afghan heritage is at serious risk of attacks and destruction as well as the collapse of the management structures built up in recent years to conserve and protect the country’s ancient past, many of which had international support. Here, we look at some of the key sites of concern. 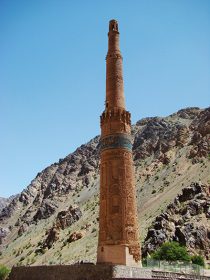 Only two Afghan sites are currently inscribed on the Unesco World Heritage list. The first was the Minaret of Jam (inscribed in 2002), located in the steep valley of the Hari-rud river, an isolated area more than 200km east of Herat and almost 2,000m above sea level. This “tower of victory” was built in 1194 by the Ghurid sultan Ghiyas-od-din to commemorate his dynasty’s empire and, at 65m, it remains one of the tallest brick buildings in the world. Its conservation presents considerable challenges, due to its distance from any city and to the rivers at its base, which have threatened its stability. Over the past 50 years, Unesco has led numerous campaigns to safeguard the minaret and in 2019, the Aliph foundation gave Unesco $2m for a project to conserve its roof and inner wooden staircase, install a monitoring system and draw up an overall conservation plan. 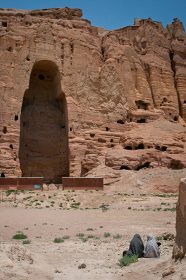 The cavity in the Bamiyan Valley where the larger of the two Buddhas of Bamiyan once stood, pictured in 2012. Before their destruction by the Taliban in 2001, the 1,500-year-old rock-hewn Buddha statues were the largest in the world US Army photo by Sgt. Ken Scar, 7th Mobile Public Affairs Detachment

The country’s second Unesco World Heritage site (inscribed in 2003) is the cultural landscape and archaeology of the Bamiyan Valley, which was scarred by the Taliban’s destruction of the great Buddha statues. Nevertheless, the site represents the main testimony of more than a millennium of Bactrian history, between the first and 13th centuries. An important stop on the Silk Road, it testifies to the migration of Buddhism from India to China. From the third to the fifth century, Buddhist monks carved a network of monasteries, chapels and cells into its high vertical walls. The site’s significance has prompted several countries to offer support for its restoration and conservation. Italy and Japan, in particular, have promoted a series of programmes in collaboration with Unesco to consolidate the Buddha niches, develop technical and managerial skills locally and to improve the quality of life for communities in the Bamiyan Valley. South Korea also committed funding for the construction of a cultural centre, which was scheduled to be inaugurated this year.

There are four other sites on Afghanistan’s “tentative list” for Unesco World Heritage nomination. Bagh-e Babur in Kabul is the only surviving garden from the Timurid era (16th century) and it was beautifully restored from 2002 to 2008 by the Aga Khan Trust for Culture. 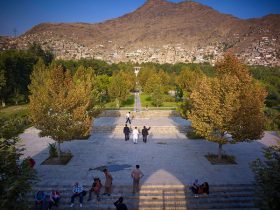 The garden of Bagh-e Babur in Kabul after restoration by the Aga Khan Trust for Culture Photo: Aga Khan Development Network/Simon Norfolk.

The historic city of Herat, a capital of the Abbasid caliphate that was completely renovated during the Timurid dynasty, is rich in monuments including the famous Citadel, the Musalla complex with the mausoleum of the empress consort Gawharshad, and the Ghurid-era Friday Mosque. 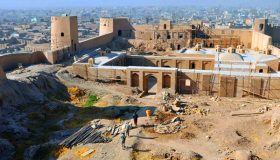 The Citadel of Herat in 2011 Photo: Sgt. Kevin Wallace.

The city of Balkh in the region of Mazar-i Sharif—ancient Bactria—was a centre of Zoroastrian spirituality, then of Buddhism and finally an important political and cultural centre after the Muslim conquest in the eighth century. Within the ruins of its walls there are still important monuments such as the Timurid shrine of Khwaja Abu Nasr Parsa. Outside the walls stands the Buddhist monastery of Nau Bahar and the Tepe Rustam stupa (shrine), in addition to the Noh Gunbad mosque, also known as Haji Piyada. Dating back to the ninth-century Samanid empire, it is probably the oldest mosque in Central Asia and has undergone restoration in recent years by the Aga Khan Trust for Culture in collaboration with the French Archaeological Delegation in Afghanistan (Dafa), the World Monuments Fund and Giovanni Secco Suardo Association. 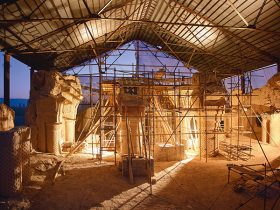 The Noh Gunbad mosque, also known as Haji Piyada, during its recent restoration. Dating back to the ninth century, it is probably the oldest mosque in Central Asia Photo: Aga Khan Development Network/Simon Norfolk.

An important natural site, Band-e Amir, is also on the tentative list for Unesco World Heritage status. It is a national park in the Hindu Kush mountains, located in the province of Bamiyan and characterised by spectacular geological formations and a series of six deep-blue lakes. 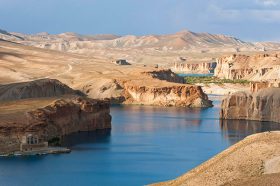 Although we do not yet know what the Taliban’s attitude will be towards Afghan heritage, it is clear that conservation in Afghanistan has experienced a real rebirth in the 20 years that have passed since the US-led invasion in 2001. The Afghan people have been protagonists in hundreds of national and international initiatives for the restoration, reconstruction and preservation of cultural heritage, developing a strong local technical capacity.

Many Afghan museums were restored in recent years, forming the embryo of a national cultural infrastructure. The most important of them, the National Museum in Kabul, had been reduced to rubble and looted in the early 1990s civil war. Fortunately, much of the collection survived thanks to museum workers who risked their lives to hide the artefacts in places the Taliban were unable to discover. 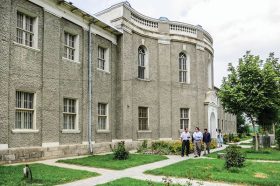 The National Museum of Afghanistan, Kabul, in 2013 after its full reconstruction.

Intangible heritage also received growing attention from the now-deposed Afghan government, with the 2016 inclusion on Unesco’s intangible heritage list of Nowruz, a New Year spring festival common to all the countries of the region, and the proposed nomination for 2022 of the Behzad style of miniature painting, the Atan national dance and the Afghan rubab, a traditional stringed musical instrument. Projects to protect and promote intangible heritage were launched in collaboration with neighbouring countries as part of a 2018-21 Unesco programme on the culture of the Silk Road, funded by the European Union.

Over the past 30 years, we have seen how conflicts in the Middle East and Central Asia have had devastating effects on heritage, from the damage caused by the armed occupation of archaeological areas to deliberate destruction, looting and illicit excavations. Furthermore, a situation of international political tension can only lead to the disruption of national and international conservation programmes and to the dispersion of technical expertise accumulated over time.

If the more extremist factions of the Taliban were to control Afghanistan’s next government, its notorious history of cultural destruction could be repeated. It is therefore imperative that the countries and organisations involved in the conservation of Afghan heritage urgently launch initiatives to safeguard artefacts and sites, thereby guaranteeing a continuity of management skills. This will be a great test of the intervention tools developed in the international arena for the protection of heritage in conflict zones.

• Francesco Bandarin is an architect and a former senior official at Unesco, director of its World Heritage Centre (2000-10), and assistant director-general for culture (2010-18). He is currently an advisor to ICCROM, to the Aga Khan Trust for Culture and to the Smithsonian Institution