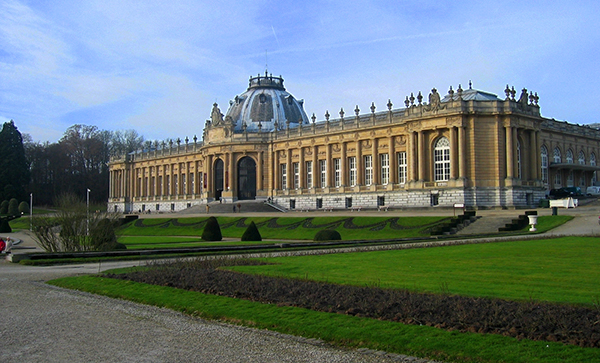 Images emerging on social media showed partygoers dressed in pith helmets and blackface at the museum. The colonial-era museum apologized for the event, admitting a “lapse in judgment.”

An “Afrohouse” party held at the Royal Museum for Central Africa in Tervuren, Belgium (commonly known as the AfricaMuseum) drew the ire of some community members after images on social media showed partygoers dressed in pith helmets, grass skirts, and blackface.

On Sunday, August 4, about 2,000 people attended an outdoor party organized by the company Thé Dansant. The organizers recommended a dress code in the style of “la sape, colorful, wakanda, future african,” referencing the fictional nation from the sci-fi blockbuster Black Panther. Some guests, as it appears, interpreted the instructions into stereotypical, offensive costumes. Photos posted on social media showed one partygoer in blackface as others turned up to the party wrapped in leopard skin prints or dressed as colonialist explorers. 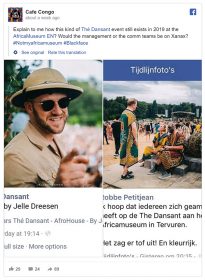 Café Congo, an art collective that focuses its work on Belgo-Congolese relations, drew attention to the event on its Facebook page. “Explain to me how this sort of event – Thé Dansant – can continue to exist in 2019 at the Africa Museum. Are the management and communications team on Xanax?” the group wrote next to the offensive images, according to the Brussels Times.

“Ethnic, exotic or African is not a costume that you can put on and take off,” Emma Lee Amponsah of the Café Congo told the Belgian publication Bruzz in an interview. Amponsah also criticized the organizers for evoking stereotypical tropes of voodoo and cannibalism by decorating a stage with skulls on sticks. “In this way stereotypes are constantly being maintained … explain to me how an event like this can still exist in 2019,” she said.

“The AfricaMuseum misjudged this situation and should have played a greater role in imposing clear requirements and/or conditions in advance,” the museum wrote in a statement posted on social media. It argued that it had warned Thé Dansant about the party’s dress code, realizing its offensive nature, but conceded that its efforts were “insufficient”.

“We take this incident seriously, and want to apologize for mishandling the situation in such a way that this took place,” it went on saying. “We take responsibility for this lapse in judgment, and are working on an ethical action plan for upcoming events so that this will not happen in the future.”

Thé Dansant, on its behalf, delivered an apology in a statement to CNN. “We’re sorry for some people that were absent and took the dress code in a negative way,” the company’s statement said. “As an organization we neither stand behind the one person that painted his face black. But this person does not represent the whole event,” it added. The company has since removed a photo of the man in blackface from its Facebook account.

The Royal Museum for Central Africa, a colonial museum, reopened its doors in December 2018 after a five-year period of renovations. It first opened in 1898 to showcase the colonial exploits of King Leopold II, the Belgian ruler who laid claim over the Congo in 1885 for his own personal enrichment. In 1897, the monarch brought 267 Congolese people to his country estate in Tervuren to display them in a mock village dubbed a “human zoo.” Seven Congolese individuals died of pneumonia and influenza after being shown to about a million Belgians during the World Exhibition. Belgium’s brutal occupation of the Congo killed millions; some estimate its death toll between 10 million to 15 million.

The museum boasts 180,000 items looted during Belgium’s 75-year occupation of the Congo. The colonial exploits include the beheaded skulls of tribal chiefs and more than 500 stuffed animals slaughtered by hunters. In its recent rehaul, the museum announced efforts to “decolonize” its displays by revising labels and exhibitions. Staffers have removed overtly racists statues from the main galleries but they remained accessible in a basement room. Furthermore, the museum kept a gilded statue representing Belgium’s “civilizing effect” on Africa in its main rotunda.

Last year, the Democratic Republic of the Congo (DRC) announced its intention to call for the restitution of the looted items back to its land. “It’s in progress, but to do so we are waiting for the end of the works and the opening of our own museum, in partnership with South Korea,” said Joseph Kabila, the DRC’s former president, in an interview to a Belgian newspaper.