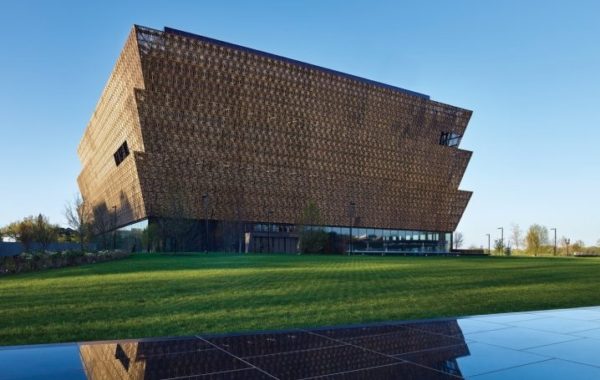 Being among such a dizzying selection of uplifting stories, you cannot avoid the conclusion that America would not be what it is without all the people represented here.

At the newly opened National Museum of African American History and Culture in Washington, D.C., there is a section on the top floor designated the “Culture Galleries,” which presents examples of African American contributions to visual art, music, dance, spoken word poetry, and other performance. The area detailing the history of the African people brought to these shores who eventually went on to create unique ways of living here is located below street level, at the foundation of the building. In the middle, the layout includes a floor of “Community Galleries,” which display exhibits on sports, military experience, faith, formal education, and examples of different residential neighborhoods with majority black populations. Other floors contain a library, classrooms, a family history center with resources for conducting research, a theater, a café, and, of course, a gift shop.

This design is not naïve. The arrangement tacitly asks visitors to understand African American culture as one that is founded upon its history, and generated by it. The implicit construction of this story of culture is elaborated and deepened by the wall texts and multimedia presentations in the “Culture” section. In total, the materials convey the argument that African American culture is a series of remarkably inventive moves to make, you might say, “sumpin outta nuthin.” If you’ve lived in this country for a while, you have heard or seen evidence of this alchemy historically enacted: black soldiers distinguishing themselves in battle despite being treated as second-class citizens by their home nation; black athletes demolishing previously held records in amateur and professional arenas despite the public will being largely marshaled against them; black students finding a way to receive a public education on par with that of whites by undoing a long-standing Supreme Court decision that had installed and defended an inherently discriminatory system. The phrase “making a way out of no way,” as one of the exhibits proclaims, is an epigram that holds in tension the contravening themes of black life: Black folks are being systematically held back, cheated, and erased, but black folks gonna triumph anyway.