April 6th, 2022 | Browse other: News. | Tagged with: AG budget sees big losers in Arts & Culture, Why arts and culture appear to be the big losers in this budget |

Guy Morrow, Why arts and culture appear to be the big losers in this budget, The Conversation, 31 March 2022

While one more A$20 million round of the Restart Investment to Sustain and Expand (RISE) Fund was announced as part of the 2022-23 budget to support reactivating the arts and entertainment sector post-Covid-19 lockdowns, this scheme is coming to an end.

With funding cuts forecast out to as far as 2025-26, the arts and culture appear to be big losers in this budget.

With the loss of COVID stimulus measures, the big losers under arts and culture in the budget are:

The decline in arts funding fits Treasurer Josh Frydenberg’s big picture narrative that the time for “crisis level” spending is now over, and the budget forecasts such as those for arts and culture only “appear” to be bleak due to the tapering down from the crisis level funding. 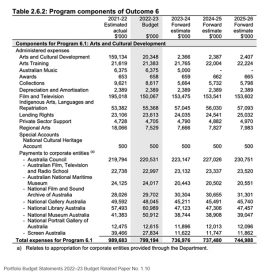 The end of RISE funding

The government’s biggest arts and culture investment during the pandemic was the RISE fund, which saw $200 million go towards 541 projects.

The RISE fund represented a move away from the “arms-length” independent funding decisions made by the Australia Council peer assessors. Instead, the arts minister had the ultimate authority regarding RISE.

While RISE was a short-term crisis level funding initiative using the arts as an instrument to stimulate the economy, support for the Australia Council in the budget is for the support of “excellent art” for “audiences in Australia and abroad”.

The difference in these programs meant RISE funding went not only to not-for-profit arts organisations and individual artists, as the Australia Council primarily supports, but also to commercial creative activity.

A loss of over-all funding

According to the government, the expected decrease in overall cultural funding from 2021-22 to 2022-23 is predominantly driven by the loss of temporary arts funding for economic stimulus.

It is not clear why this scaling down of crisis level funding appears to be uneven.

In particular, many of Australia’s cultural institutions – who are already under pressure when it comes to preserving cultural heritage – are facing significant cuts.

Over the last two years, the arts were valued by the federal government to the extent that they were able to be used to stimulate the economy.

The assumption appears to be that, now that the creative and cultural industries have received a $200 million shot in the arm, they will now be able to stand back up and walk on their own two feet – and help those businesses around them do likewise.

It doesn’t appear the RISE Fund, and its ultimate decision making power by the minister, is a template for the future of arts funding in any literal sense because it is due to disappear.

But it may have changed the culture of arts funding in this country, explicitly focusing funding on cultural activities and initiatives informed by an overtly commercial mindset.

With many artists and organisations still struggling in this “COVID normal” landscape, this budgetary pendulum swing away from funding artistic projects and events paints a bleak picture.