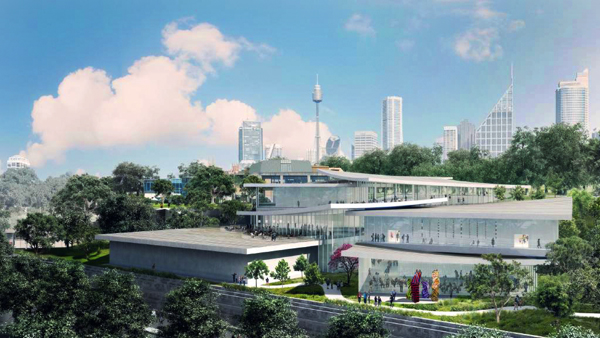 Michael Brand, Sydney Modern will enable us to show more art to more people, The Art Newspaper, No. 303, July/August 2018

In an opinion piece published in our June edition (“Sydney’s flagship museum is entirely focused on building a costly extension. But what will it show there?’; p5), the art critic John McDonald argued that the Art Gallery of New South Wales’s planned extension, Sydney Modern, has had a detrimental effect on the museum’s exhibition programme. He claims that, as a consequence, the extension is likely to be a “gigantic and costly flop”. Here, Michael Brand, the museum’s director, responds.

The Art Gallery of New South Wales sits on a remarkable site in Sydney, a place with deep history and of complex cultural inflection. The gallery’s expansion project, known as Sydney Modern, will deliver us brilliant new spaces to show more art to more people. It will inspire diverse audiences to engage with art and join important conversations sparked by artists about who we are and how we can live in a richer state of humanity. Last year, we recorded our largest ever annual attendance – further evidence that our museum is achieving greater artistic and social relevance.

Sydney is where Aboriginal Australians and European settlers first met. Ever since, our city has created new opportunities for so many looking to start new lives. Bold and provocative, Sydney trades on its fluidity, much like counterparts such as Hong Kong, Mumbai, Istanbul, Amsterdam, Cape Town, Rio de Janeiro, New York and San Francisco: all now cosmopolitan port cities rather than political capitals, where ideas are mobile, and aspirations are boundless.

From its stunning parkland and harbourside setting in Sydney, our expanded institution will represent this spirit as an Australian 21st-century art museum with a deep commitment to both the local and the international. This is rightly an ambitious project that was conceived from the outset as a public-private partnership, to which our state government has committed A$244m. Our private fundraising goal is A$100m, of which more than 90% has been raised.

The sublime new building designed by the Tokyo-based and Pritzker Prize-winning Sanaa architects will offer new types of engagement with art – experiential, speculative and responsive – along with seamless connections between indoor and outdoor spaces. Our expansion will also repurpose as gallery space a disused Second World War oil tank; my colleague Glenn Lowry, the director of the Museum of Modern Art, New York, said after a recent visit that he has “tank envy”.

The gallery’s much-loved existing building, with its late19th-century sandstone facade, will be linked to the new building by an Art Garden. In this building, visitors can view historical art inflected by the contemporary, while the new building will feature contemporary art inflected by the historical and will also provide new spaces for major temporary exhibitions.

In life, we are often caught looking forever forward, particularly in the art world, as we anticipate the emergence of the next artist, art form or comment on contemporary life (often on museum expansions, of course). But we must also take the time to pause, look to the past and reconsider those artists whose work deserves renewed attention. Part of our transformation is a desire to create more projects based on our historical collection.

This takes us to some very interesting places, such as the Aboriginal community in Milingimbi in the far north of Australia. From the late 1940s, artists there created a distinct form of expression, collected early by the gallery, which was pivotal to the appreciation of Aboriginal bark painting as art. Last year, we considered the work of these artists afresh in the exhibition Art from Milingimbi: Taking Memories Back. In a unique research collaboration, this exhibition enabled the descendants of these artists to attribute names and dates to these remarkable works, very few of which are held in public collections.

As we prepare for a major survey of the Sydney-born Impressionist John Russell – whose life and work, alongside Monet, Matisse and Van Gogh, provides an augmented history of Australian art – and as we anticipate the arrival later in the year of the pioneering work of the European and Russian Modernists coming to us from the State Hermitage Museum in St Petersburg, we will remain true to our history but also open to new ideas and ways of doing things, to bring change that is truly transformational for our great harbour city.