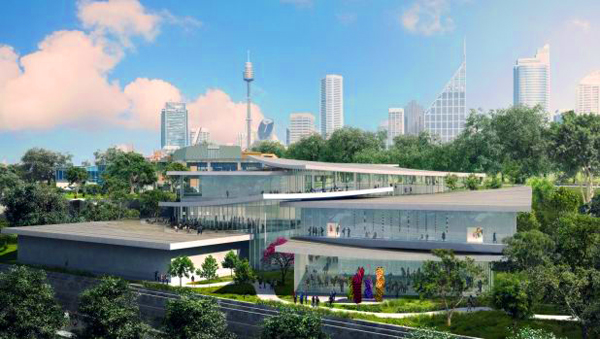 The Art Gallery of NSW’s ambitious Sydney Modern expansion is being given the go ahead by the state government via a $244 million funding injection for the controversial project.

The plan will see the gallery double its floor space, with construction starting by 2019 and completed in time for its 150th anniversary and 100th anniversary of the Archibald Prize in 2021.

In addition to the government money, contained in next week’s NSW budget, the gallery is raising $100 million from private donors to fully fund the project.

On Tuesday the gallery said $70 million had already been pledged, and confirmed that it will launch a major fundraising program in the next few months to raise the balance of $30 million.

The $244 million, over four years, will come from the $600 million culture and arts fund created from the proceeds of the privatisation of state-owned electricity “poles and wires” businesses.

Treasurer Dominic Perrottet told Fairfax Media it was “an exciting project for Sydney and for tourism to our great state.”

“The Sydney Modern Project will turn our 19th Century Gallery into a global museum of the future,” he said.

“For too long the city has missed out on many exhibitions to Melbourne and Brisbane because we lacked adequate exhibition space,” she said.

Unveiled in 2013, the Sydney Modern plans extend the existing, historic gallery building to the north east.

A series of eight low lying pavilions designed by the Japanese architects Kazuyo Sejima and Ryue Nishizawa of SANAA will start at the land bridge crossing the Eastern Distributor and continue down the hill opposite the Royal Botanic Gardens.

The pavilions will land on top of two enormous, and long decommissioned oil tanks, built in 1942.

The government says the new wing will contain spaces for “art, live performance and film along with spaces to learn, study and participate in cultural experiences”. Even though it is called Sydney Modern, the space will be used for traditional and contemporary exhibitions.

Also promised is “the nation’s most innovative display of Aboriginal and Torres Strait Islander art and culture”, much of which is in storage currently.