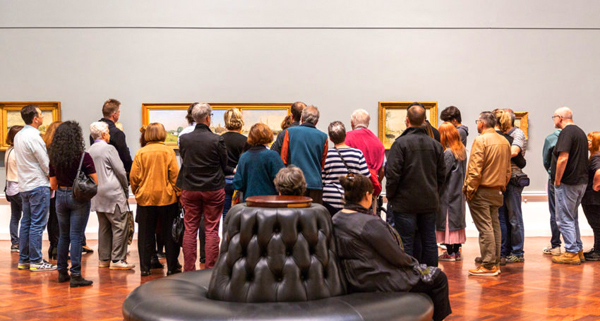 The landmark Colours of Impressionism exhibition attracted a record-breaking 159,442 visitors to the Art Gallery of South Australia across its 123-day season.

The gallery said around 35,449 of the visitors came from outside South Australia.

It was reported last month that the exhibition, featuring more than 60 Impressionist masterpieces from the Musée d’Orsay in Paris, was on track to beat the record for a ticketed show, with the final figures announced today after it closed on Sunday.

Colours of Impressionism: Masterpieces from the Musée d’Orsay contributed to a highly successful 12 months for the gallery, with a total of 1,051,033 visitors attending its exhibitions and associated events during the 2017/2018 financial year – 200,000 more than during the previous year.

Gallery membership also grew 40 per cent during the exhibition season.

Gallery co-acting director Lisa Slade said Colours of Impressionism had attracted audiences of all ages, and she was particularly encouraged by the high number of school visitors.

“We owe the success of Colours of Impressionism to our audiences and specifically to South Australians, who visited in droves and who drive us to be ambitious.”

Adelaide was the only Australian city chosen to host the exhibition, which featured works by artists including Manet, Cézanne, Monet, Renoir and Pissarro. It was the final show presented by former gallery director Nick Mitzevich, who has now taken up a new role as director of the National Gallery.