You are here: Home » Articles filed under: 'News' » Article: 'Ai Wei-Wei on Hong Kong – At this point'

Ai Wei-Wei on Hong Kong – At this point 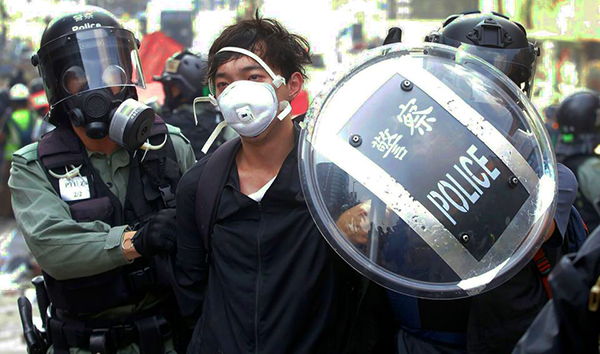 Police officers detain a protester near the Hong Kong Polytechnic University in Hong Kong on 18 November 2019; Hong Kong police have swooped in with tear gas and batons as protesters who have taken over a university campus make an apparent last-ditch effort to escape arrest AP Photo/Achmad Ibrahim.

Ai Weiwei, In Hong Kong, university campuses have become literal battlegrounds in the protracted clash between police and protesters over the region’s future, The Art Newspaper, 18 November 2019

In Hong Kong, university campuses have become literal battlegrounds in a protracted clash between police and protesters over the region’s future. Earlier this year, demonstrations against an extradition bill by pro-democracy activists drew more than a million people to the streets. Critics worried that the proposed law would undermine the democratic rights of Hong Kong citizens. The government withdrew the bill amid public outrage, but demonstrators have turned their momentum into a full-throated call for democracy in Hong Kong. Recent protests have been bloody as police pockmark the streets with rubber bullets and teargas. Children have been hospitalised; men have died. And as Ai Weiwei notes, the turmoil also marks the 30th anniversary of the 1989 Tiananmen Square protests. We asked the artist to comment on the parallels and what may come from Hong Kong’s activism.

“The future of Hong Kong is already set. We see a generation of young people with a strong belief in democracy joining the prior generation that was sacrificed in front of the world 30 years ago. What is different today is that nobody is supporting Hong Kong. Western governments do not care about what is happening in the region. The Trump administration has said several times that it would not interfere in China’s “internal” problems. The British have enough troubles as it is with Brexit looming. And in Germany, Chancellor Angela Merkel has visited China more times than even I have.

Nobody in the West cares about human rights; those values are being exploited and abandoned. This abdication of ethics is allowing China to become the number one superpower in the world. What we see in Hong Kong is more than a clash between the government and a region it controls, but an attack by a tyrannical regime unwilling to change and a people defending freedom and democracy to the last breath. Whatever happens, it will be a reflection of our global predicament. But right now, it looks like China will inevitably win.

The art will come out eventually, but there is no reason to assume governments like China, North Korea, or Saudi Arabia care about their global image anymore.

At this point, who cares about art and images? The art will come out eventually, but there is no reason to assume governments like China, North Korea, or Saudi Arabia care about their global image anymore. They do whatever they want, and nobody can stop them. That’s how Jamal Khashoggi was murdered in Turkey. Governments know what happened and they allowed it. It is a sad vision for the future of humanity.

Hong Kong demonstrators are the heroes of our time. But very often, heroes are the ones who are hurt and sacrificed. I want to see their long-term goals achieved, and I want them to protect themselves. I am sure they understand what they are facing. When I was first detained, the main accusation against me was based on a conversation that I had at the Chinese University of Hong Kong. The interrogators had accused me of subverting state power because I answered some crucial questions the students there had asked me about our society. And students later came to my defense. They put my image on subways and sidewalks. One artist projected my image onto a wall at the People’s Liberation Army barracks in the heart of Hong Kong.

I have realised that Hong Kongers have been demonstrating for the last 30 years — ever since Tiananmen Square. Nobody in the world can break their record. When you understand that history, you understand their values. They have always been on the right side of history, even as human rights policies have disappeared in the West. Hong Kong’s youths are special. So many of them seem so pure and innocent. They do not even know how to throw a rock. Even during the protests, they are determined to clean up the streets to make the city pretty again. But then you have the Hong Kong government, which is a puppet to the central authorities. They are not concerned for the lives of these students. They employ dirty tactics, like using agent provocateurs. They have no moral guidelines.

But revolution must happen, and all revolutions have the same quality. There will be fighting, of course, but do you think any authoritarian government is willing to give up power peacefully? You could wait another thousand years for that and it would never happen.”

—As told to Zachary Small