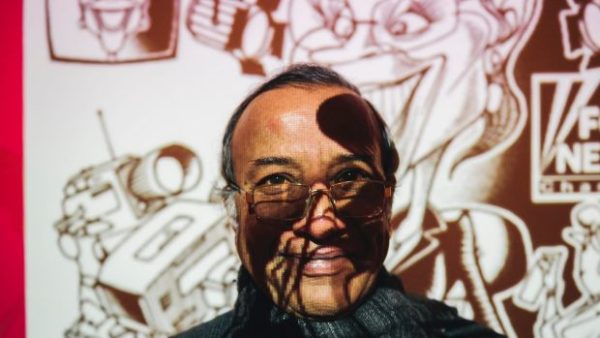 Indian political cartoonist Ajit Ninan at the opening of his exhibition at the Museum of Australian Democracy. Photo: Rohan Thomson.

With nuclear-armed India and Pakistan bristling at one another over the latest Kashmir crisis,  a grand cartoon about the continuing Kashmir nightmare has coincidentally gone on display in Canberra. With Kashmir again giving the world the horrors it is a treat, a relief, to chortle at Ajit Ninan’s cartoon on the subject.

The exhibition Ajit Ninan: Cartoonist to the World’s Largest Democracy, has just opened at MOAD. The distinguished cartoonist himself  was there for the opening. He took this fortunate reporter on an explanatory tour of a selection of his cartoons, arranged on the walls of a room in a famous building that from 1927 and for 61 years generated so much material for Australia’s political cartoonists.

Ninan, 62, is slightly built and meeting the towering Canberra Times’ cartoonist David Pope at the launch he, Ninan, joked that standing together they looked “like a human exclamation mark”. In conversation the Indian cartoonist radiates a playful love of ideas and whimsies.  In conversation with me his voice rose and fell theatrically and his arms and his hands (the latter often playfully tapping me) were never still.

Happy the democracy that has a press that employs and an elite that suffers political cartoonists. The very existence of free or freeish political cartoonists in a nation is a kind of a proof that the nation really is a democracy. Ajit Ninan’s cartoons appear every day of the week in paper and online editions of The Times of India and are seen by untold millions.

It is a matter of rejoicing but also of frustration for him that Indian politics and Indian society offers a cartoonist such a superabundance of material. There’s vastly more than he can possibly tackle.

“[Indian society and politics] are endlessly entertaining. You have a two party system here [in Australia]. America has two a two-party system. But in India we have a system where there are 14 parties!”

This gives him a cast of thousands of people, their foibles and intrigues, to follow, to be entertained and/or appalled by.

Then, he adds, there are the exciting challenges given an Indian artist/cartoonist by the miscellanies of facial features and of complexions that’s come about because of India’s long, long history of invasions, occupations and racial intermixings.

“I always start with the nose, then decide where to hang the rest of the face.”

Some of his four-panel cartoons (these are his popular Politricks “transformations”) open with a caricatured but recognisable famous face but then over the next three panels show that face being artfully morphed into something else. The face of a leader of a state notorious for its gun culture evolves, by the fourth panel into a revolver. A notoriously thick-skinned, bullying, truculent politician from a state known for its rhinoceros poaching begins with an ugly, angry human face but by the fourth panel has become a truculent rhinoceros. Another politician (“Basically he is a sweet chap … the public loves him because of his bungles…he’s never derided or hated”) morphs sweetly into a delicious-looking, desired-by-all, ice cream cone.

Ninan explains that he practises his art and exercises his precious degrees of freedom with great caution.

“[Being a political cartoonist in India] is like being a hockey centre forward dribbling around various opponents to try to score a goal. The ‘opponents’ are editors, social forces, community forces.”

He says that it’s not a matter of seeking to please and appease all these opponents (he is far too independent-minded for that) but only of his always taking some account of his complex society’s sensitive complexities.

I wondered if offended politicians ever monster him when his cartoons offend but he says that direct monstering of offending journalists and cartoonists is rare. Instead, he reports ruefully, the offended get their staffs to lean upon editors and proprietors and to hint that government advertising (in every democracy a major source of media outlets’ revenues) may be withdrawn if the offence-giving continues.

The exhibition bristles with little masterpieces of which this reporter’s favourite, seen in a week in which India-Pakistan tensions were sending chills up spines, was the aforementioned Kashmir cartoon.

The cartoonist led me up to it to explain the work, his commentary on the appalling financial costs of the ways in which the two misguided and belligerent governments maintain armies to glower at one another, in Kashmir at 6000 metres above sea level across the snowy wastes of the contested Siachen glacier.

What if, the cartoonist has imagined, each nation was represented not by thousands of bristling men but by one snowman? In the foreground a Pakistani and an Indian snowman (each has a rifle made of twigs) pretend to stare belligerently into one another’s faces. Just behind them the snowmen’s delighted creators, one Indian and one Pakistani soldier, hug one another in a brotherly embrace. They are marvelling that they’ve taken so long to come up with this simple, inexpensive, gentle, tension-removing way of having their nations represented in this snowy wonderland.