You are here: Home » Articles filed under: 'News' » Article: 'Albanese’s quote on the frontier wars'

Albanese’s quote on the frontier wars

February 25th, 2021 | Browse other: News. | Tagged with: Albanese’s remarkable words on the frontier wars should have been said at the war memorial, historical ‘holes in national memory’ around frontier violence and resistance | 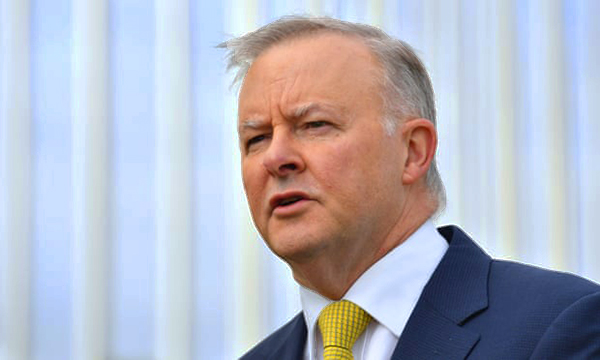 Anthony Albanese said the words about the frontier wars were unintentionally omitted from the speech he delivered at the war memorial. Photograph: Mick Tsikas/AAP.

Paul Daley, Albanese’s remarkable words on the frontier wars should have been said at the war memorial, The Guardian, 22 February 2021

The Labor leader’s assertion of the historical ‘holes in national memory’ around frontier violence and resistance is commendable and important.

Ever since Australian troops fought under a British flag in the disastrous Gallipoli invasion and retreat, mainstream national politics has been beset with historical memory loss.

A contradiction of history, thanks to wartime prime minister Billy Hughes, who spun disastrous military defeat into the national moment, has eclipsed so much critical continental experience that came before and after Anzac by which we might otherwise define ourselves.

Subsequent political leaders of a continent that has staged 60,000, 80,000, perhaps 100,000 years – and counting – of continuous Indigenous civilisation, have done little to depart from the trope of national foundation in that military operation on a (then) obscure finger of the Ottomans.

Federation’s first great external challenge – to raise the 1st Australian Imperial Force from disparate former colonies to fight overseas and die in multitudes under the British flag – is, according to the trope, the birth moment of the nation. Forget the European invasion, the frontier wars, the land-grab upon which the federation was built – and the first business of a neophyte federal parliament, the White Australia policy.

Federal parliament and key cultural institutions of national commemoration (think the Australian War Memorial, and 26 January and Anzac Day holidays) have long paid lip service to Indigenous resistance in the conflicts across this continent that, by reliable estimate, violently killed more Aboriginal and Torres Strait Islander people in Queensland alone than Australian soldiers in the first world war.

Amid the false history over 26 January, it pays to consider what Australia was really built on

That’s why Labor leader Anthony Albanese’s parliamentary speech last week marking 13 years since Kevin Rudd’s apology to the stolen generation was important to so many First – and other – Australians.

He spoke elegantly of the imperative for historical “truth-telling” called for in the 2017 Uluru Statement from the Heart, its centrepiece a constitutionally-enshrined voice to parliament (cynically rejected by consecutive conservative governments but supported by Labor).

Truth-telling, he said, “must fill the holes in our national memory”. Nothing could be truer.

“I spoke recently at the War Memorial about those Indigenous Australians who donned the khaki and fought for a nation that was not prepared to fight for them. They fought for a continent for which their own people had fought during the frontier wars, wars we have not yet learned to speak of so loudly. They, too, died for their loved ones. They, too, died for their country. We must remember them just as we remember those who fought more recent conflicts.”

Yes, the Labor leader had spoken two weeks earlier at the Australian War Memorial in acknowledgment of Indigenous personnel who had fought for the Australian nation (the memorial makes much of “Black Diggers” but refuses to meaningfully or extensively tell the story of Indigenous frontier resistance). His written speech for the memorial went further, acknowledging the Indigenous resistance fighters of the frontier, too. But when he spoke at the AWM the critical words about frontier war were (unintentionally, he says) omitted. 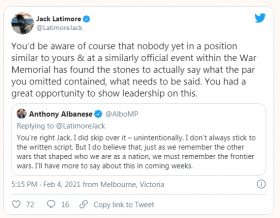 Albanese’s assertion in parliament of the historical “holes in national memory” around frontier violence and resistance is commendable and important. But it’s worth considering how much more weight it might have carried if delivered at the war memorial, a place where intransigence on the issue is long-running and baffling.

The war memorial is, at once, Australia’s most revered and controversial national institution. It is revered as the nation’s secular shrine to Anzac. But it is increasingly controversial and criticised (including for years by myself and a legion of historians, former directors and others) for its refusal to anywhere near adequately tell the story of frontier conflict.

It has long been largely deaf and blind to much Indigenous sensibility, and resistant to reform. On its six flagpoles facing Anzac Parade snap six Australian flags. Except, that is, for two weeks a year (Naidoc and Reconciliation weeks) when it will fly the Aboriginal and Torres Strait Islander ensigns.

Two weeks a year! Most commonwealth buildings do so as a matter of course. The governing council (comprising largely senior serving or former defence personnel and former prime minister and all-things-military-enthusiast Tony Abbott) does not want to change the status quo on that (or much else) it seems.

It is also infamous for its other historical omissions (including Australian war-related atrocities, not least those alleged in the ongoing Afghanistan conflict) and for a pending, unnecessary $500m expansion (supported, largely without question, by the Labor opposition).

Like the white-hatted Anzac myth it enshrines, the memorial is a political shibboleth. Woe betide, perhaps, the political leader who questions the pervasive Anzac myth – or its shrine, the war memorial – and what both omit from history. Especially in a speech in the memorial itself.

So potently has Australian history become militarised that federal politicians who once merely marked the opening of each parliamentary session with attendance at a religious service, now also go to the Australian War Memorial to give thanks with similar solemn, ecclesiastic fervour.

It was in that context – “in the lion’s den of the nation’s preferred narrative” as Indigenous writer and activist Jack Latimore notes – that Albanese could have spoken of those national memorial holes.

Albanese’s fine words in federal parliament about frontier wars are remarkable and laudatory. They’d have been more so if spoken at the war memorial.

A great hypocrisy among many of Australian military memorialisation is the lauding of some supposedly egalitarian experience of the “Black Digger” in uniform and the parallel denial of memorial agency to Indigenous resisters of white invasion.

It’s time a mainstream political leader said so in the lion’s den.