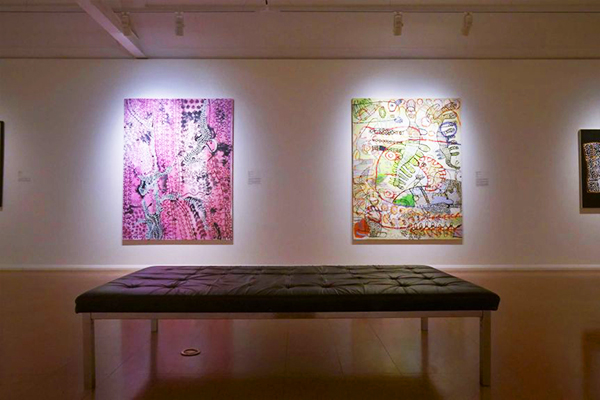 Art on display at Araluen Art Centre, one of the few non-commercial gallery spaces in Alice Springs.(ABC News: Dylan Anderson).

Three years after a Northern Territory Government appointed steering committee delivered its report on plans for the National Aboriginal Art Gallery, it is yet to be built and a final location is yet to be settled on.

In early 2017 the Government committed $50 million to the project and appointed a committee, comprised of some of Australia’s brightest thinkers in the arts.

But members of the original committee said their vision was abandoned and negotiations between the Alice Springs Town Council and the Territory Government have stalled over where the gallery should be built.

What was the Initial Steering Committee’s vision?

The NT government appointed committee was chaired by curator, writer and consultant Hetti Perkins and Philip Watkins, chief executive of Desart, both prominent Aboriginal leaders in the arts.

In its report, the committee recommended that the gallery be built at the Desert Park, five kilometres from Alice Springs in the shadow of the MacDonnell Ranges.

The committee included leading arts administrator Michael Lynch, who said the original committee now felt like its vision was ignored by the Territory Government.

“It was going to contemporary, it wasn’t trying to deal with thousands of years of history,” Mr Lynch said.

“It was focussed on being a national gallery dedicated entirely to contemporary Aboriginal art, in Central Australia, the home of the movement.

“I think they junked our report, because fundamentally the Government disagreed with our major finding: that the gallery should be put at the Desert Park, outside of town.”

After the report was published the government committed to building the gallery in the Alice Springs CBD.

“It [the Desert Pak site] was kind of a vision that would bring people from all over the world, it would be iconic … something like that can’t be built in the centre of Alice Springs hoping to solve the town’s social issues. 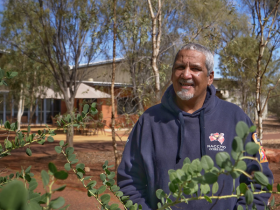 Initial Steering Committee member Michael Liddle said the quiet of the Desert Park was the most appropriate location for the gallery, allowing visitors to experience the landscape that informs Aboriginal art. (ABC News: Dylan Anderson).

Community development expert Michael Liddle was also on that committee and is currently a project manager at Desert Knowledge Australia. 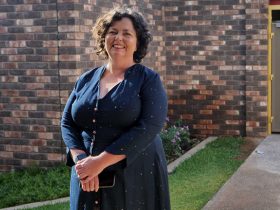 “Aboriginal Art is about country and you want nice quiet calmness to enjoy and understand art; and that Desert Park had the best feel for it, complementing a national Aboriginal Art Gallery,” he said.

“The building, in that place, was going to be part of the experience, and the Government had experts on that committee who knew how to really leave visitors feeling satisfied and interested.”

Dale Wakefield is the member for the Northern Territory seat of Braitling and a key proponent of the project in the NT Government.

“We have accepted all of that report, we have absolutely listened, we know that all that can be progressed once we confirmed the site … the only differences in our approach would be around that location,” Ms Wakefield said.

If not the Desert Park, then where? 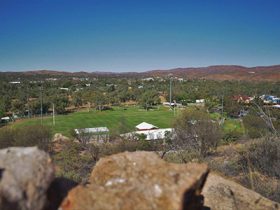 The move to build a National Aboriginal Art Gallery in Alice Springs, has stalled with the committee saying it was politicised. (ABC News: Neda Vanovac).

After the initial report was published, the Government commissioned a business case for the project to be built in the Alice Springs CBD.

The business case found that it would bring an additional 53,000 visitors to Alice Springs each year and up to $64.2 million.

She said that building the gallery in town would be better for local business.

“It wouldn’t necessarily have the same economic impact on the whole economy of Alice Springs, [if it were at Desert Park] as if it was part of our community in the centre of town.”

The Territory Government’s preferred site is the ANZAC Hill precinct in the CBD including the oval owned by the local council.

The Territory Government last month said they would compulsorily acquire the land for $3 million from council if they would not negotiate its hand over, but it has been blocked. 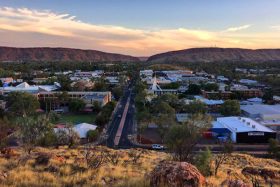 The move to build a National Aboriginal Art Gallery in Alice Springs, has stalled with the committee saying it was politicised. (ABC News: Neda Vanovac).

Last year the Town Council turned down a $20 million offer from the Territory Government to move its operations to a government owned area of ANZAC Hill, so that the gallery could be built at council’s CBD location.

Since then, negotiations have stalled.

“It’s disappointing that council has been so obstructionist on this right throughout this project,” Ms Wakefield said.

Mr Paterson said that council supported the project and would negotiate with council once the government proved that they had the support of traditional owners. 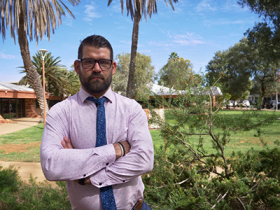 Alice Springs deputy mayor Matt Paterson says council supports the project but has no position on where the gallery should be built.(ABC News: Dylan Anderson).

The Government is adamant that they do, citing three months of community consultation completed in 2018.

Prominent NT political scientist Rolf Gerritsen said the gallery had become politicised ahead of the August Territory election, where the council’s Mayor and Deputy Mayor will represent opposition parties against the Labor government.

“I’m a little bit surprised the Government is threatening the council on this issue, because they could allow the stand-off to continue until the election, and say ‘we wanted to build a gallery but the council stopped it.'”

“Well for me personally, I shake my head at the many people that’s been involved in it and where it’s come to now,” said Mr Liddle of the political situation.

Is there a race to beat South Australia?

In March of 2019 South Australia secured funding to build a National Gallery for Aboriginal Art and Cultures, which appeared to steal the project from the Northern Territory.

In August of that year the project dropped the word “national” from its name and it became clear that the project would display the South Australian Museum’s extensive collection of anthropologically and spiritually significant Indigenous artefacts — not contemporary art.

That project has just finished 12 months of consultation and South Australian Premier Steven Marshall has said that it would open in 2023.