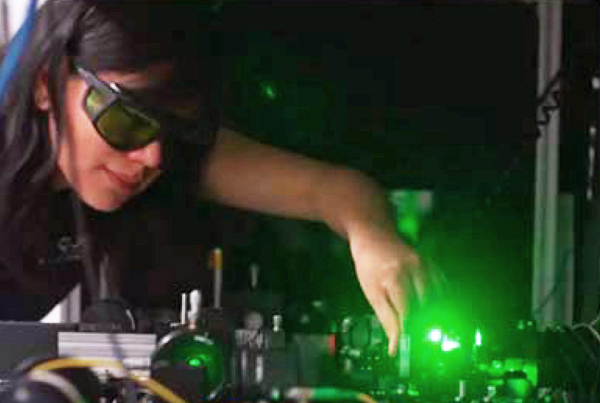 A way to detect leukaemia, a glue to fix wounds faster, a game which has already identified new species, a layer of see-in-the-dark particles on eye glasses, and work to help switch Australia’s power to 100% renewables are among the winners of the peak science awards, the 2018 Australian Museum Eureka Prizes.

A total of $160,000 in cash prizes was presented across 16 prizes for research and innovation, leadership, science engagement and school science.

“The winners of the 2018 Australian Museum Eureka Prizes show us yet again how Australia’s scientists are kicking the big goals – they are making impacts in many areas of global significance,” says Australian Museum Director and CEO, Kim McKay.

“From life-saving breakthroughs in medical science to discoveries which provide a sustainable future and change how we see the world around us or those which allow us to understand how our own bodies and brains work, Australia is producing extraordinary, world-leading scientific results.”

Ten of the 16 prizes feature female winners or women involved on the winning teams.

NSW Office of Environment and Heritage Eureka Prize for Environmental Research
ANU Professor Andrew Blakers, Dr Matthew Stocks and Bin Lu have challenged the barriers to renewable energy in Australia. The team discovered 22,000 sites suitable for cost-effective pumped hydro energy storage, raising the profile of opportunities within the clean energy industry. At 100 times more than needed for a totally renewable electricity system in Australia, the team’s study proves cost and storage are no barrier to a clean, green future.

UNSW Eureka Prize for Excellence in Interdisciplinary Scientific Research
Optical Physics in Neuroscience, University of Queensland. The Optical Physics in Neuroscience team has devised methods for studying how our brains work to detect gravity and motion. Using optical trapping and novel microscopes, they successfully imaged the functioning brain circuits that process gravity and motion and combine this information with other senses. Bringing together two separate specialist teams, the group solved one of science’s greatest challenges — how to study movement systems without the subject moving.

Johnson & Johnson Eureka Prize for Innovation in Medical Research
Professor Tony Weiss, University of Sydney Professor. He has developed an adhesive surgical glue that quickly seals wounds without the need for staples. His research found the protein building-block tropelastin not only halves the time for new blood vessel in-growth into a wound, but also triples the rate of wound closure. The technology, made from natural elastic protein, has the potential to revolutionise treatment at emergency sites and was recently sold to an international pharmaceutical company.

ANSTO Eureka Prize for Innovative Use of Technology
Professor Wendy Erber, Dr Kathryn Fuller and Henry Hui, University of Western Australia. The groundbreaking invention can detect abnormal chromosomes inside leukaemia cells. This fast, accurate and sensitive automated method can detect just one leukaemia cell in 10,000 normal cells, a major advance that will lead to personalised treatments and better patient care.

Macquarie University Eureka Prize for Outstanding Early Career Researcher
Dr Mohsen Rahmani, Australian National University. Imagine being able to see in the dark by accommodating a layer of smart particles, 500 times thinner than a human hair, on your eye glasses or car windscreen. Or a sensor which can detect ultra low concentrations for biomarkers in human breath, signaling someone is seriously unwell. Nano and meta technology — where everything is smaller, finer, lighter and more sensitive — can do just that. Dr Rahmani’s research has a wide range of applications including night-vision technology, smart mirrors & lenses and ultra-sensitive biochemical detectors. Several organisations are interested in commercialising his work.

Defence Science and Technology Eureka Prize for Outstanding Science in Safeguarding Australia
The Sapphire Clock Team, The Institute for Photonics and Advanced Sensing, University of Adelaide; and Cryoclock Pty Ltd. A clock which keeps time within one second over 40 million years offers the potential for an upgrade to Australia’s safety, allowing the Jindalee Over-The-Horizon Radar Network (JORN) system to emit signals that are 1000 times purer than current methods and therefore see smaller objects at greater distances. Combining two decades of pioneering research with engineering, the Sapphire Clock Team’s technology offers the potential for a step change in the performance of the JORN, a vital Australian defence asset.

UNSW Eureka Prize for Scientific Research
Professor Sally Dunwoodie, Victor Chang Cardiac Research Institute. What if a vitamin could prevent miscarriage, foetal death and birth defects? Professor Sally Dunwoodie and her multidisciplinary team have discovered the potential of vitamin B3 to treat a molecular deficiency causing miscarriages and multiple types of birth defects. Their finding could prevent developmental defects through a common dietary supplement, which may transform the way pregnant women are cared for around the world.

3M Eureka Prize for Emerging Leader in Science
Associate Professor Elizabeth New, University of Sydney. Regarded as one of Australia’s brightest young inorganic chemists, Dr Elizabeth New’s leadership extends beyond her research to encompass teaching, outreach and mentoring. Committed to developing the next generation of scientists, she has built a strong network of collaborators and works tirelessly to improve research culture and environments. Elizabeth’s vision is to enable better prediction and diagnosis of diseases by developing new chemical tools to explain previously unseen biological processes. Ahe was the first to show copper is critical in metabolic processes, suggesting copper deficiency may play a role in obesity and copper supplementation could therefore potentially restore healthy metabolism.

CSIRO Eureka Prize for Leadership in Innovation and Science
Professor Thomas Maschmeyer, University of Sydney. He is a world leader in the chemistry of catalysis. He aims to generate and translate new knowledge into commercial solutions as part of his vision for a more sustainable world. His discoveries allow widespread use of renewables and recyclables in the chemical, material and energy spaces. His discoveries have resulted in 23 patents and the foundation of four companies.

University of Technology Sydney Eureka Prize for Outstanding Mentor of Young Researchers
Professor Nalini Joshi, University of Sydney. She has been instrumental in training and mentoring dozens of individual researchers and countless others. A strong advocate for gender equality, her influential actions have transformed the research landscape and supported young female scientists across Australia. Nalini was an initiator of Science in Australia Gender Equity (SAGE) which is transforming the research landscape by increasing the encouragement, support and retention of female researchers in STEMM.

Department of Industry, Innovation and Science Eureka Prize for Innovation in Citizen Science
QuestaGame. By combining the forces of gaming mechanics and information economics with a unique online reward system, QuestaGame motivates users to engage with biodiversity. With over 1 million sightings and identifications, by participants in over 40 countries, this outdoor gaming app has quickly become the largest provider of expert-verified biodiversity image data in Australia. QuestaGame is also attracting the attention of young people, with some remarkable identifications such as a ten-year-old who has found more than 1000 species and an Aboriginal student who discovered a new species of spider.

Celestino Eureka Prize for Promoting Understanding of Science
Associate Professor Alan Duffy, Swinburne University of Technology and The Royal Institution of Australia. He is a regular and recognisable personality in the Australian media, promoting science to all Australians. Through a combination of mainstream and social media channels, he has demonstrated that astrophysics can stand alongside sport or business as a news segment, making science a part of everyday life.

University of Sydney Sleek Geeks Science Eureka Prize (Primary School)
Amelia Lai and Caitlyn Walker, Presbyterian Ladies’ College, Sydney, NSW. It is estimated that bees pollinate one third of the food we consume each day, making them an integral part of the environment. In Bee Aware and Care, Caitlyn and Amelia explain the major causes of bee population decline and share some practical strategies for saving these important insects.

University of Sydney Sleek Geeks Science Eureka Prize (Secondary School)
Ella Woods and Emily Woods, St Margaret’s Anglican Girls School, Queensland. It’s estimated that two out of three people in the world are not able to consume dairy products without experiencing gut discomfort and gas. In Gas Busters, Emily and Ella explain the science behind lactose intolerance, explore its evolution and present a simple solution that allows everyone to enjoy cow’s milk.