You are here: Home » Articles filed under: 'News' » Article: 'AM 190 celebrates past, present & future success'

AM 190 celebrates past, present & future success 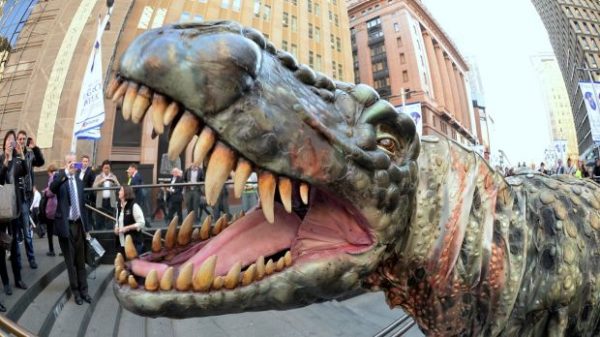 On August 23, 1831, just after breakfast, William Holmes shot himself in the chest with his own double-barrelled shotgun, while collecting a cockatoo. The cabinet maker and keen naturalist had been gathering “birds and other curiosities” on Stradbroke Island when stung. “Oh my God, I’m dead,” he said, before becoming so.

The accidental death cut short his career as the inaugural custodian of Australia’s first museum, which celebrated its 190th birthday this week. The long history of the Australian Museum boasts many a curious tail (sic). Of death and discovery, misadventure, music and a tiny Tasmanian snail called Attenborougharion rubicundus. Well, more of a slug really.

The colourful creature was named after Sir David Attenborough, who recently lauded the museum as a “scientific centre of world importance”.

The natural history museum has come a long way since being set up in a shed and outhouse in Sydney.

Its latest move is into North America, where the museum’s exhibition Tyrannosaurs: Meet the Family has attracted record visitor numbers for Canada’s Waterloo Region Museum since opening there in February.

Australian Museum director Kim McKay says the exhibition will also go on show in the United States, as part of a new international touring program that will reap more than $1 million a year.

The museum plans to export the exhibition Spiders … Alive and Deadly, currently on show in Sydney, to North America by the end of the year.

McKay says museums in Asia and Europe are also “rife for Australian content”. “Historically, Australian museums and galleries have brought big exhibitions in from overseas. But why can’t we take ours to the world,” she says. “All museums now have to look to new ways to generate income.”