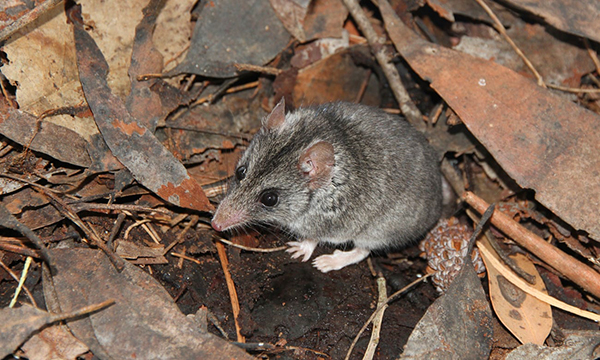 The endangered Kangaroo Island dunnart has had fires burn through its known habitat on Kangaroo Island. The species may now be on the very brink of extinction. Photograph: Peter Hammond/WWF-Aus / Paul Fahy.

Bronwen Scott, Armchair expeditions: the addictive joy of dunnart spotting, The Guardian, 26 May 2020

The photograph is black and white, taken at night by an infrared camera. A fence of fine mesh runs at an angle from left to right. It is barely visible in the dark. Something triggered the camera, but even when I check the images that precede this one, I can’t see anything obvious. Squinting does not help. Neither does enlarging the photo until it turns into a monochrome mosaic.

I am looking for dunnarts, those miniature cousins of quolls and Tasmanian devils. So far, I have seen photos starring wallabies, beautiful firetails (little round finches with scarlet rear ends, black masks and finely striped fronts), and even a brush-tailed possum, looming over the camera like a fluffy Godzilla. One sequence had been triggered by a pudgy beetle. Another by a sleek black skink that scuttled along the base of the fence. But in this photo, there is nothing except grass stems and the almost invisible fence.

Reluctantly I tick the box that says, “there’s no animal in view”, submit the record, and move on to the next one. Science is a lesson in disappointment.

The images I am studying are part of a survey of native animals on Kangaroo Island, following the devastating bushfires at the start of the year. South Australian researchers set up camera traps to record which animals are making use of the remaining patches of unburnt vegetation. Fifteen thousand photos were uploaded to the internet. Within a few days, 300 volunteers had processed them, noting all the species present. Hopefully, the endangered Kangaroo Island dunnart was among them.

The dunnart project is one of dozens hosted by the Australian research platform Digivol. Created by the Australian Museum in Sydney and the Atlas of Living Australia, Digivol aims to transform data locked away in museums and scientific collections into freely accessible information. It achieves that by connecting scientific institutions with volunteers, and it does it all online.

Volunteers are working on projects – Digivol calls them “expeditions” – ranging from recording activity at malleefowl nests to transcribing hand-written field diaries from research trips and entering information from specimen labels into searchable databases. 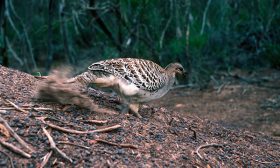 Digivol is not all fur and feathers. Notebooks offer an insight into the complexities of field work. One short project involved transcribing a diary from an Australian geological expedition to Papua New Guinea in the 1970s. The daily entries recorded the difficulties of travelling between islands in speedboats and canoes, slogging 763 metres up a rainforest slope to peer at lava flows and making camp under “poison ivy”. Remarkably, they were written without the pen tearing clean through the paper.

Historical expeditions also appear on the list. The University of New South Wales has uploaded bench books from the Magistrates’ Courts of Port Macquarie (1828–1837). These books record the discipline meted out to convicts at the penal station at Hastings River, during the time when newly arrived Governor Richard Bourke was attempting to reform the system.

Another historical project looks at the cases heard against women in the Hobart Court of Petty Sessions (1850–1854). Many of the women on trial had arrived as convicts, and the ledgers record the crimes for which they were transported and the names of the ships that brought them half way around the world to Van Diemen’s Land. Founders and Survivors advise:

Some transcribers may find the material in these records offensive — colourful language and violent crimes can be described.

They also warn that:

They are right. Digivol is addictive. Camera trap expeditions, like the Kangaroo Island project, are the most popular. They’re a chance to get into nature from the comfort of your home. 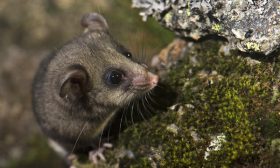 The Koala Drinkers project – which had me at koala and again at drinkers – placed cameras around water bowls fixed to trees. The after-dark photos feature a succession of thirsty brush-tailed possums and little sugar or squirrel gliders. In the daytime photographs, eastern rosellas and butcherbirds, and in one sequence, a gang of apostle birds, all mug for the lens.

Another expedition monitors mountain pygmy possums at water and food stations in the alpine boulder fields of Kosciuszko National Park. The superb parrot project asks volunteers to not only record which species are using nesting hollows, but also what they are doing.

I’ve easily spent half a day on Digivol in one sitting, but you can also dip into it for five minutes and still make a useful contribution. And you never know, the next photo uploaded might be the one with that elusive dunnart.