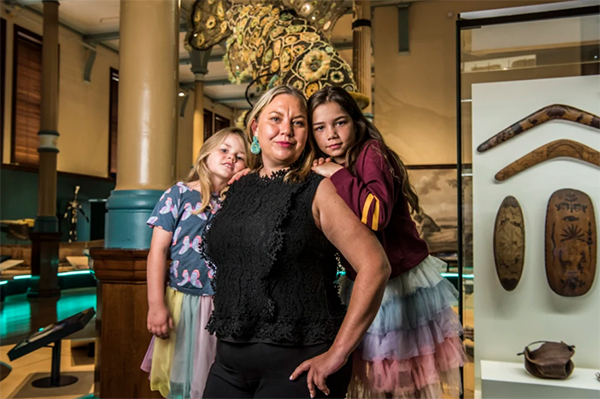 Linda Morris, ‘For my ancestors’: Museum’s Indigenous director has quite a task on her hands, The Sydney Morning Herald, 8 March 2021

The repatriation of ancestral remains will be a priority for the Australian Museum’s First Nations director, the first appointed in the institution’s 194-year history.

Wailwan and Kooma woman Laura McBride wants to see hundreds of sets of human remains returned to their communities for reburial within 10 to 15 years.

The remains are among 20,000 Indigenous cultural objects held by the Australian Museum and a further 60,000 objects from Pacific First Nations, the care and presentation for which Ms McBride is now responsible in the newly created executive role.

The museum began repatriation more than 35 years ago, among the state’s first collecting institutions to do so. It is the custodian of skeletal remains received from overseas, and from medical institutions and national parks in Australia.

The provenance of a majority of the museum’s ancestral remains is unknown.

“We just don’t know where to repatriate them,” Ms McBride said, “so [I am] looking to work with the national government and state government to continue conversations on establishing resting places for ancestors so that we can get them out of museums, off shelves, and at peace where they deserve to be.”

Ms McBride will lead a project to reclassify and digitise all cultural objects, grouping them appropriately and drawing on the knowledge of local communities and an advisory group to provide a deeper understanding of their meaning and cultural standing.

“There is an enormous gap in information we have about the objects and the cultures they come from,” Ms McBride said. “Typically if you look up an object in our collection you will know the non-indigenous collector and when it was collected but it will typically say ‘maker unknown’ or something along the lines of ‘full-blooded Aboriginal’ or other remarks along those lines.”

Ms McBride grew up travelling between her parents’ homes in Sydney and Coonamble. Her father was born at Montkiela, a fringe camp in Walgett. Her mother is currently the director of nursing at a major western Sydney hospital.

Now the mother of two daughters, Bronte and Mackenzie, Ms McBride is immersing them in their culture and has started possum cloaks for each.

“Everything I’m doing, I’m doing for my ancestors because I felt like they didn’t have quite the opportunity that I’ve had and also for future generations,” she said. “It’s looking back and forward and my girls are very proud cultural girls.”

Among the first communities, Ms McBride hopes to consult will be those from south-eastern Australia where the existence of Indigenous culture has too often been written off.

“Even though I’ll be director I’m not boss of the cultural collections, that’s the communities and that’s the elders,” she said. “I will be asking for patience, but Aboriginal people have been patient already and they will understand we are starting this journey. ”

Australian Museum director Kim McKay said Ms McBride had worked for 11 years at the museum in a variety of roles.

In 2018, Ms McBride created the Australian Museum’s inaugural festival of Aboriginal and Pacific Island cultures, Weave, challenging centuries-old stereotypes and myths about Indigenous culture around the time of colonial settlement.

The disinformation and myth-making around Indigenous people was “scary,” Ms McBride said.

“It’s no wonder these negative stereotypes are so strong. Education is the key and that’s an important part of my role and the team we’ll build around us.”

This May, her latest “truth-telling” project, Unsettled, opens in the museum’s Touring Hall, unpicking the myths around Cook’s mapping of the East Coast, the years between 1770 and 1788, and what came after. Cook was dead nine years before the arrival of the First Fleet, his explorations guided by Dutch and Portuguese explorers who went before him. Neither in name or nation was Australia a familiar concept to Cook, Ms McBride said.

Going back into the colonial records, she notes Sydney’s first governors were all military men requesting the British War Office send soldiers and weapons.

“Australia was not peacefully settled and the history is still unsettled,” she said.