You are here: Home » Articles filed under: 'News' » Article: 'AM & AWMM crack a key sunfish enigma' 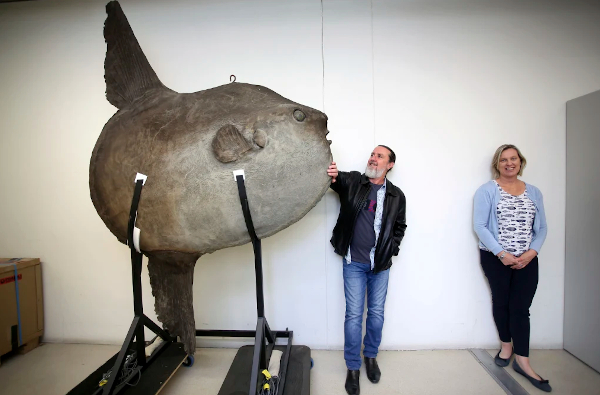 Julie Power, Scientists crack the enigmatic beginnings of the sunfish, The Age, 22 July 2020

In a world-first breakthrough, Australian and New Zealand scientists have cracked the fishy mystery surrounding the oversized oddball of the sea, the bump-head sunfish (Mola alexandrini).

For the first time, they have identified which minuscule baby fish, or larvae, develop into these giant marine creatures.

Unlike a puppy or a kitten, a sunfish’s offspring or larvae look nothing like their adult form. In fact, they most resemble a Pokemon, said Marianne Nyegaard, lead scientist on the sunfish discovery.

Even stranger was that larvae are rarely found. “We don’t understand that because the adults are super fecund,” said Dr Nyegaard, an expert from the Auckland War Memorial Museum.

A female 1.5 metres long can produce 300 million ova in a season. “Given sunfish are so incredibly fecund, it is an enigma why sunfish larvae are so few and far between – where are they?” she asked. 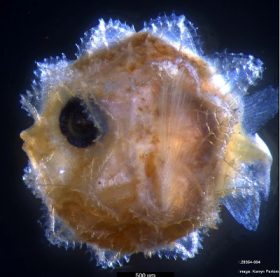 Working from larval specimens caught off the NSW coast, molecular biologist Andrew King at the Australian Museum’s Genomics Laboratory in Sydney this year extracted DNA from a larva’s eyeball – about the size of a grain of sand. It was genetically identified as a Mola alexandrini larval specimen for the first time ever, and a perfect match for the adult sunfish Mola alexandrini in the museum’s collection.

Dr Nyegaard and Australian Museum scientists Kerryn Parkinson and Mr King describe the discovery as the first step in an endeavour to protect a little understood species.

Nyegaard said it was a first crucial step in identifying the sunfish’s minuscule larvae that grow into a giant tail-less fish the size of a small car. It was an “anchor” that will facilitate more understanding of what she calls the “weirdest fish on the planet”. 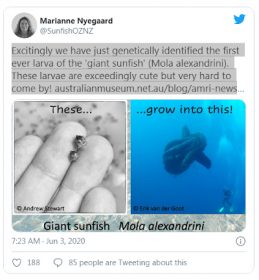 “In people’s minds, they are slightly unimportant oddities or curiosities, regarded as a quirk of evolution. But if we want to protect these marine giants we need to understand their whole life history and that includes knowing what the larvae look like and where they occur,” she added.

The DNA was matched using a range of specimens in the Australian Museum’s collection.

This proved it was the same type of sunfish as the one caught by Robert Chadwick at his sawmill in Pyrmont in 1882, and now on display.

After being preserved (following several smelly failures to preserve other sunfish), the specimen was hoisted through the windows of the Australian Museum a year later. 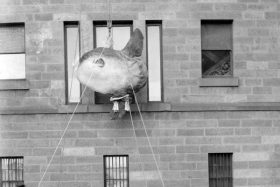 After being preserved by taxidermists in 1883, the huge sunfish specimen had to enter the museum gallery via the tallest available opening: an upstairs window. Credit: Australian Museum.

When the same sunfish was sent to the United Kingdom for preservation, it was found to be stuffed with ‘the equivalent of 25 large refuse sacks of wheat straw, a broken chair and scraps of The Sydney Morning Herald from January 26, 1883.

While some fish larvae resemble their parents, many don’t.

“In the world of fish larvae, it is a bit like Star Wars. It is nuts, the diversity and wildness. You have larvae with eyes on stalks, and stomach trailing out,” Dr Nyegaard said.

The bump-head sunfish is one of only three types of Mola found in Australian waters. Professor Kris Helgen, chief scientist and director of the Australian Museum Research Institute, said these molecular-level descriptions of the world’s biodiversity provide a deep understanding about different species.

Tales of sunfish have intrigued Sydneysiders and museum workers since the late 1800s, Australian Museum director Kim McKay said. “For me, a sunfish drives home how extraordinary waterways are. It is host to large sea creatures, whales, shark, and these enormous sunfish, which stretch the imagination,” she said.