You are here: Home » Articles filed under: 'News' » Article: 'AM Centre for Wildlife Genomics determines'

AM Centre for Wildlife Genomics determines 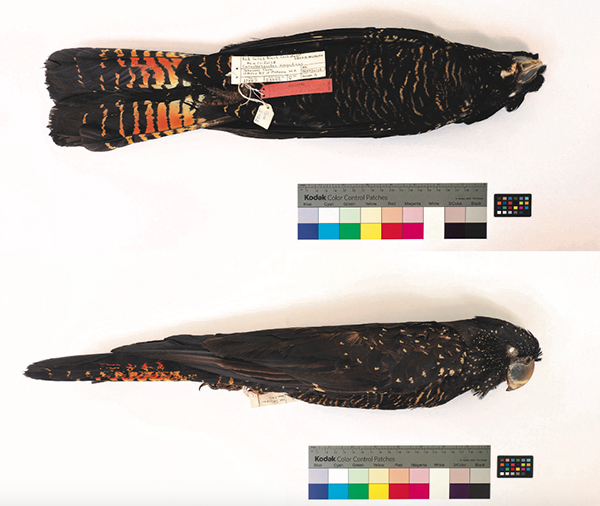 When recognising a new species or subspecies, a “holotype” (i.e., the specimen from which the subspecies or species was first described) is required. The holotype for Calyptorhynchus banksii escondidus is a specimen held at CSIRO’s Australian National Wildlife Collection (ANWC), specimen ANWC B37847. (Image: Gordon Gullock, via Kyle Ewart.) Gordon Gullock.

A large genetic study has uncovered a new subspecies of one of Australia’s most iconic birds, the red-tailed black cockatoo, Calyptorhynchus banksii. The newly identified subspecies is unique to inland Western Australia and lives in regions spanning the Wheatbelt, east of Perth, to the Pilbara in the state’s north-west.

“Escondidus is new — it’s the subspecies’ name and it basically means ‘hidden’ because it’s been hidden in plain sight”, said lead author of the study, conservation biologist Kyle Ewart, a PhD Candidate at the University of Sydney and a Research Associate at the Australian Museum’s Centre for Wildlife Genomics, where he researches the population genomics of two commonly traded Australian cockatoo species.

The red-tailed black cockatoo is a large black parrot with scarlet panels in its long rounded tail that is hard to miss. Females and immatures can be readily identified by their black-striped orange tail panels, horn-colored beaks, and by the buff-colored stripes and polka-dots sprinkled throughout their black plumage. 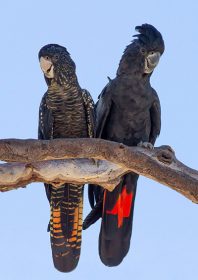 Native to Australia, this seed-eating parrot ranges across much of the continent, and is quite common in eucalyptus or casuarina woodlands. Some subspecies are mainly found in Brown Stringybark forests in south-western Victoria and south-eastern South Australia, whilst others prefer Marri, Jarrah and Karri forests in south-western Australia. Yet other subspecies are less restricted in their habitat preferences, and even occur in several urban areas and regional towns.

Like other cockatoos, red-tailed black cockatoos cannot excavate their own tree hollows, yet they depend upon them for nesting. Further, the red-tailed black-cockatoo is also targeted by the illegal wildlife trade. 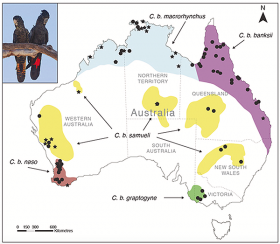 Surprisingly, despite ongoing and widespread habitat destruction, there has not been a comprehensive genetic analysis of this species. As a result, it is difficult to design and implement informed conservation priorities and strategies, especially for the populations living in the northern tropical and arid regions of Australia.

So Mr Ewart and an international team of collaborators from the Australian Museum, the University of Sydney, The Commonwealth Scientific and Industrial Research Organisation (CSIRO), and the University of Edinburgh conducted a large comprehensive genomic assessment of red-tailed black cockatoos from across their entire range. The team collected samples from specimens stored for many decades in museums throughout Australia.

“We were able to extract a large amount of genetic data from these specimens, some of which were over 100 years old”, Mr Ewart said. 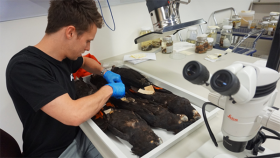 Mr Ewart and his collaborators used advanced DNA sequencing and analysis techniques to (1) investigate the relationships between currently identified subspecies and (2) to help them develop effective conservation strategies.

The red-tailed black cockatoos had several surprises in store

Based on the data, Mr Ewart and his collaborators estimated that the ancestor of red-tailed black cockatoos appeared within the past ~1.28 million years. They also identified five ‘conservation units’ (subspecies) within the species (Figure 2). 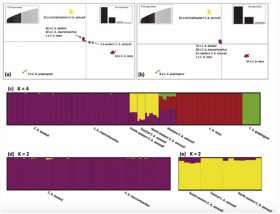 Fig. 2 Population structure in Calyptorhynchus banksii based on SNP data. Discriminant analysis of principal components for a K = 5, based on 60 principal components, 131 C. banksii samples and 11,918 SNPs from the DArTsoft14 SNP data set; and b K = 4 with the same settings and data as described for K = 5. Inset barplots represent the DAPC eigenvalues of the analysis (top right of each panel) and the PCA eigenvalues that were retained for the analysis (top left of each panel). STRUCTURE plots under various sampling schemes, based on SNPs from the DArTsoft14 SNP data set, for c K=4, based on 130 individuals across all C. banksii populations and 7219 SNPs; d K = 2, based on 63 individuals (C. b. banksii and C. b. macrorhynchus) and 7013 SNPs; and e K = 2, based on 15 individuals from central/eastern C. b. samueli and 3727 SNPs. Each individual is represented by a vertical bar showing the percentage ancestry attributable to each of the pertinent genetic groups identified by different colours. (doi:10.1038/s41437-020-0315-y) DOI:10.1038/S41437-020-0315-Y

Mr Ewart and his collaborators also established that the Endangered graptogyne subspecies of western Victoria and south-eastern South Australia has the lowest overall level of genetic diversity, and is probably suffering from inbreeding. 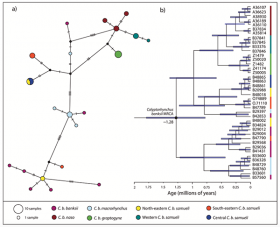 Fig. 3 Relationships of mtDNA haplotypes within Calyptorhynchus banksii. a TCS-based haplotype network based on 1998bp of concatenated sequences of mitochondrial ND1, ND2 and ND5. Dashes on haplotype network branches indicate mutations between haplotypes, and the sizes of circles are proportional to the number of samples for each haplotype. b Phylogeny and divergence times of C. banksii based on 1998 bp concatenated sequences of mitochondrial ND1, ND2 and ND5 (isolated from Supplementary Fig. S11a). Blue bars on the tree correspond to the 95% credibility intervals of the estimated node ages. (doi:10.1038/s41437-020-0315-y) DOI:10.1038/S41437-020-0315-Y

Mr Ewart and his collaborators were surprised to discover that the ‘five conservation units’ identified by their DNA analyses were not the same five subspecies that had been recognized previously (Figure 4). 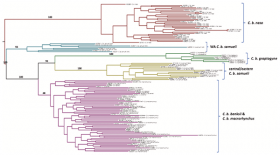 Based on the DNA data, Mr Ewart and his collaborators made two changes to the formal classification within the species. First, because they did not find any genetic separation between the two subspecies, banksii and macrorhynchus (Figure 4), found across northern Australia, these two northern subspecies were combined into a single subspecies, banksii. This is despite the fact that the sparsely wooded plains fringing the Gulf of Carpentaria are known to physically separate many species in this region, but it apparently does not form ay sort of a barrier between banksii and macrorhynchus (Figure 4).

Looks versus genetics: similar looks are not necessarily closest relatives

But what was most surprising about this study?

“The discovery of this new subspecies surprised me most”, Mr Ewart said in email.

“Before this research, this new subspecies was considered part of the inland red-tailed black-cockatoo subspecies. We thought it might be genetically different due to its geographic isolation to the other inlaid populations, but we didn’t expect it to be that different. We found it was more closely related to the forest subspecies.”

Thus, the second taxonomic change that Mr Ewart and his collaborators made was to assign the samueli populations living east of Perth and on the Wheatbelt in Western Australian to a new subspecies. The genetic data showed these populations were most closely related to the forest red-tailed black-cockatoo, naso, and not to the other populations of samueli scattered across Australia.

How did this newly identified subspecies arise in the apparent absence of a physical barrier?

“This newly discovered subspecies, Calyptorhynchus banksii escondidus, likely evolved and diverged from the inland and northern subspecies in the presence of the vast deserts of Western Australia, and from the south-western subspecies (i.e. C. b. naso, the forest red-tailed black-cockatoo) in the presence of tracts of light woodlands”, Mr Ewart elaborated. “However, C. b. escondidus seems to have expanded its range more recently due to the emergence of agriculture in this region.”

Mr Ewart and his collaborators named the new subspecies escondidus, meaning ‘hidden’ in Spanish, because for many decades, it was ‘hidden in plain sight’ as part of samueli.

Although they are not each other’s closest relatives, the physical similarities between escondidus and samueli are probably the result of convergent evolution, a process where they ended up looking alike because they live in similar habitats and have similar ecologies, despite having different genetics.

“The ecology of C. b. escondidus appears to be key to morphological differences between it and the forest red-tailed-black cockatoo subspecies, its closest relative”, Mr Ewart noted in email.

“They evolved to be similar because they both feed on the ground and live in similar arid and semi-arid habitats”, Mr Ewart summarized.

And yet despite their many physical similarities, avian morphologist and co-author of this study, Richard Schodde, identified specific distinguishing features between escondidus and samueli.

This research would not be possible without museum specimens

“It only took decades of Museum collections and an extensive genetic analysis to recognise them!”

Specimens were added to these museums’ collections throughout the decades, long before anyone knew about or could imagined the power of cutting-edge DNA technologies. As a result, not only has a new subspecies of red-tailed black cockatoo been identified, but this genetic data will help conservation biologists outline a strategy to help rescue the Endangered graptogyne subspecies from continued loss of genetic diversity.

“We hope that this study can be used to inform conservation strategies to ensure the ongoing survival of this magnificent species.”