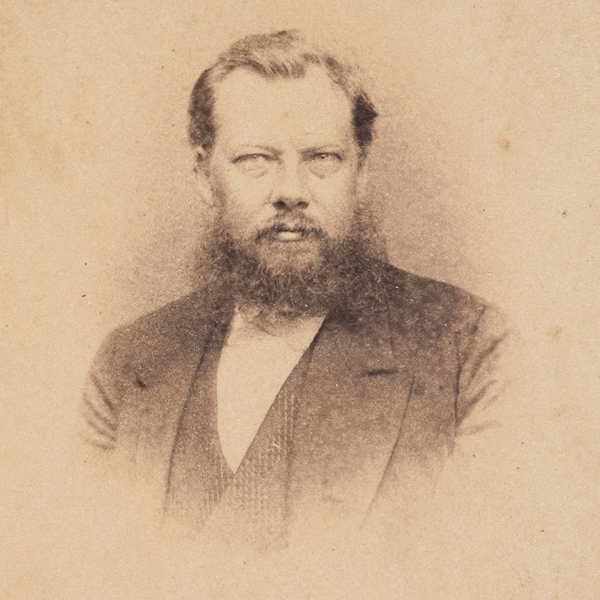 Gerard Krefft wasn’t only interested in collecting animal specimens — he was interested in documenting their behaviour too. (Supplied: State Library of New South Wales).

YOUTUBE: At what point did the Australian Museum become a hub for scientific research?

Museums are no strangers to controversial exhibits and questionable collection practices.

But in 1874, when two big burly blokes hustled a man out of the Australian Museum and chucked him out onto the street, it marked the end of a particularly spicy chapter of the institution’s history.

The evictee was a zoologist named Gerard Krefft. And how he came to be booted out of the museum he’d headed for a decade is a story of scientific squabbles, enormous egos, and Charles Darwin himself.

So who was this Krefft guy?

Born Johann Louis Gerard Krefft in northern Germany in 1830, Krefft migrated to Australia in 1852 where he spent a few years making money in the gold rush in Victoria.

His real passion, though, lay in natural history. 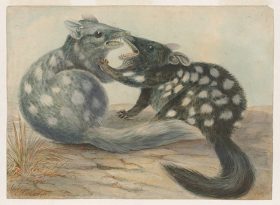 Krefft drew this illustration of fighting eastern quolls (Dasyurus viverrinus), or as he put it, a “pair of native cats”. (Supplied: State Library of New South Wales).

While practising his art by copying animals from books in the Melbourne library, he caught the eye of William Blandowski, the curator of what would become the Melbourne Museum.

Blandowski offered Krefft a spot on an expedition to the junction of the Murray and Darling rivers, says Vanessa Finney, head of World Cultures, Archives and Library Collections at the Australian Museum.

“They were out there for nine months, collecting animals and preserving and documenting them, and worked with local Aboriginal people to find the animals they wanted.”

From all accounts, it wasn’t easy going. Alongside problems with horses and equipment not working, Krefft was an “obstinate” and “cantankerous” character, Ms Finney says, constantly clashing with those around him — especially Blandowski.

Still, the expedition collected around 15,000 specimens, and off the back of that work, Krefft was employed as assistant curator of the Australian Museum in Sydney in 1860.

“He was the first person employed at the museum with those kinds of credentials, even though they were field-based and he was self-taught,” Ms Finney says.

Not long after Krefft moved to Sydney, the existing curator Simon Pittard died of consumption, and in 1864, Krefft took over as head of the museum.

Back then, the museum’s main role was to collect and name plants, animals, fossils and the like, and send most specimens to England to be studied.

Australian animals, in particular, were in hot demand. They were unlike anything else in the world, and the appetite for specimens was insatiable. 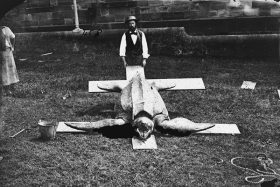 But Krefft decided no, he wouldn’t send the museum’s collections to Europe. Instead, he wanted to keep them in Australia to be photographed and studied here.

He was a prolific collector — even taking his wife on a field trip on their honeymoon in 1869 — and (among many other things) chronicled Australian megafauna, including a giant echidna.

He also thought he’d found a new species of Tasmanian tiger (although that would later be shown to be a juvenile of the modern species).

Also around this time, Charles Darwin published On the Origin of Species, his famous and, at the time, controversial book outlining the process of natural selection.

Krefft quickly became a fan of both Darwin and the theory of evolution, even exchanging letters with Darwin over the years.

“Krefft was very receptive to this new idea [of evolution], and he saw that it could help him explain what he’d seen in both living and fossil animals in Australia,” Ms Finney says. 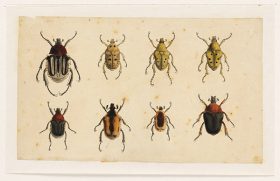 Krefft didn’t limit himself to drawing vertebrates. He also drew beetles, such as these flower chafers. (Supplied: State Library of New South Wales).

For instance, the Australian lungfish has a set of gills as well as a functional lung, which it uses to breathe air if its freshwater environment becomes low in oxygen or muddy.

It’s barely changed in 100 million years, and is considered a transitional creature between fossils and living animals.

“Immediately, when Krefft saw this living fish, he could link it to fossil fish using Darwin’s theories and his own field work,” Ms Finney adds.

In 1870, he formally named it Neoceratodus forsteri. 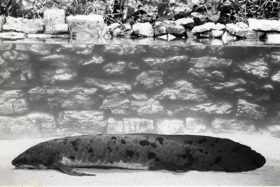 The Australian lungfish uses its fins like arms and has a bone structure similar to our upper limbs. (Supplied: Chicago Shedd Aquarium).

Naturally, Krefft wanted to study evolution in other Australian animals, but this ruffled the feathers of the museum’s trustees, which had a powerful religious — and creationist — contingent, Ms Finney says.

“Some were pro-Darwinian and could see that Krefft was on the right side of history, but they weren’t the most powerful ones [on the museum’s board].”

Unsurprisingly, given Krefft’s difficult and disagreeable nature, plus his evolutionist views and devotion to the museum, he and the board did not get along.

He blamed trustees for prioritising their personal collections over the museum’s, and they accused him of drunkenness and damaging museum property.

After some gold was stolen from the museum, the trustees fired Krefft in 1874.

Krefft considered it an unfair dismissal, stating that only the government could sack him from his position.

He barricaded himself inside the apartment within the museum where he and his family lived.

The trustees then kicked it up a notch.

“Matters,” according to a court report in the Sydney Morning Herald, “had thus arrived at a climax.”

One of the trustees, Edward Smith Hill, led a group that included “two ‘resolute men’ … one of whom at least was a professional pugilist … to capture the curator’s stronghold.

“Having made their way to the door of Mr Krefft’s private apartments, admission was demanded ‘in the Queen’s name’.”

They managed to bust into the apartment, then into Krefft’s parlour, where he was sitting in a plush armchair, reading.

The “resolute men” lifted Krefft in his chair and started carrying him out, but it was too awkward and heavy. They got as far as the door before they had to set it down.

Instead, they grabbed Krefft and dragged him to the front entrance of the museum, where they bundled him down the stairs and out onto the street.

He and his family lived down the street while he campaigned to get his director role back and took the museum’s trustees to court.

He won some financial compensation, but not his job.

He even wrote to his penpal Charles Darwin for help.

“I have been forcibly ejected from my quarters in the Museum by order of some of the Trustees who desired to be revenged because I proved them a pack of imposters,” he lamented in an 1874 letter.

“A true believer in the theory of developement I am hounded down in this Paradies of Bushrangers’ of rogues Cheats and Vagabonds.”

But Darwin, despite replying “sorry to hear of all your troubles”, did not offer any help apart from a five-pound donation.

Bitter to the end, Krefft even started his own “Australian museum”, showcasing his personal collection, just around the corner from the real Australian Museum. 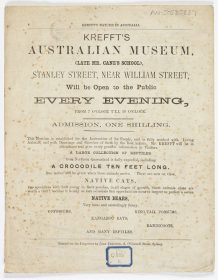 But it was all for naught. He became ill and died in 1881, two days after his 51st birthday, leaving behind his wife Annie and their two sons.

The whole ordeal would shape how the museum ran well after Krefft’s death, Ms Finney says.

“What would the museum be if a man with that sort of vision had been allowed to continue, and if we had exhibited evolution as part of what the museum did?

“The positive effect [of Krefft’s tenure] was that Australia began to see itself as a place where Australian nature should be kept, and was much more confident in its ability to do the work itself.

“But also the reaction against that amount of chaos shut the museum’s innovation and creativity down for two decades.”

These days, Gerard Krefft’s name is enshrined in a handful of species, such as the northern hairy-nosed wombat (Lasiorhinus krefftii) and the southern dwarf crowned snake (Cacophis krefftii).

And his chair, the one he was sitting in when he was turfed out in 1874, is on display in the Australian Museum, a reminder of that tumultuous chapter of its history.