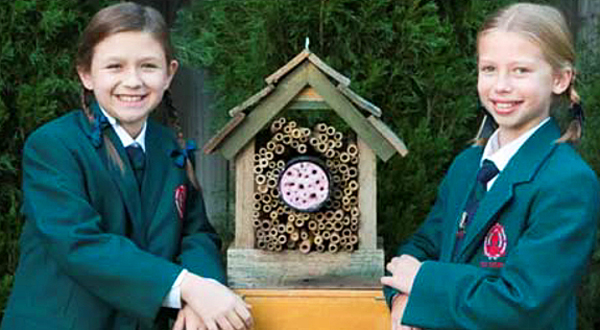 Caitlyn Walker and Amelia Lai, both 10, have gone from knowing next to nothing about bees to donning bee suits, building bee hotels around their neighbourhood and winning a Eureka Prize for their research on the declining species.

“We didn’t know much about bees except that when they’re aggravated, they sting and get beheaded and die,” said Caitlyn, who is in year 5 at Presbyterian Ladies’ College, Sydney.

“So we learnt a lot during the project. They pollinate one-third of our plants and without them we’d be eating rice, wheat and corn.

“And they’re becoming endangered because they have a loss of habitat and a loss of biodiversity and people are using pesticides.”

Caitlyn and Amelia were named the winners of this year’s Australian Museum Eureka Prize for primary school science on Wednesday for their video showing their findings on major threats to bee populations and strategies for saving bees.

They spent about seven months researching their subject, talking to experts and working on their video during lunchtimes and on weekends.

“We spoke to the Urban Beehive and they took us to their hives in Centennial Park where all the bees are kept,” Amelia, who is also in year 5 at PLC, said.

“It was really, really cool. We got to hold and see all the bees, got to put on the suits and learn more. People underestimate bees sometimes and mostly just think they sting us, but they’re really important.

“We definitely want to plant more flowers and get more bee hotels and hives in the community, and educate and support everybody in helping the bees.”

Bee hotels are essentially boxes filled with hollowed tubes and can be put into backyards to encourage bees to nest.

Annie Martin, the junior school science coordinator at PLC, said Caitlyn and Amelia and four other students who were named as finalists or made it into the highly commended category for the Eureka Prize stood out as being very inquisitive.

“They see things and wonder things and they don’t just leave it at that, they want to read and investigate why,” Ms Martin said.

Ms Martin and three other teachers met on a weekly basis with all 11 groups that submitted a video for the competition to help them with research planning, collecting findings and putting together their videos.

Ms Martin, who helps students with extracurricular projects before and after school and during lunchtimes on most days, said: “I just love being able to have kids loving science, I want them to have inquiring minds and to want to know and want to share.”

She said both the open-ended nature of the competition, which lets students choose whatever topic interests them, and the video aspect for the schools prize is important.

“My belief is that in science, you can press a button and get an answer to a question really quickly in today’s world but a big part in the future with our children is to teach them not just to understand but to be able to communicate, to learn stuff so they know it well enough to share it with others.”

This year’s other winners include Wendy Erber, Kathryn Fuller and Henry Hui for their work on detecting abnormal chromosomes in leukaemia cells, and Sally Dunwoodie for her discovery of a vitamin that could potentially prevent miscarriages and birth defects