You are here: Home » Articles filed under: 'News' » Article: 'AM finds new spaces for major exhibitions' 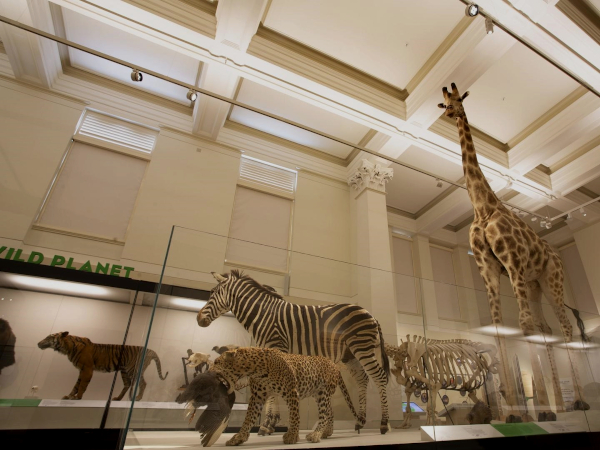 Katrina Lobley, Out with the old, The Australian, 12 February 2021

At 10am on a weekday, I expect to stroll straight into the Australian Museum. Turns out I’m dreaming. Those were the old days. These are brand-new times. A queue has formed along College Street, bordering Sydney’s Hyde Park, to await the opening of doors. Clearly, the institution is now hot stuff rather than stuffy.

The museum, Australia’s oldest, unveiled the results of a 15-month, $57.5m revamp, its most extensive renovation in decades, in November. Back-of-house areas were opened up to add more than 3000sq m to the museum’s public space. The most notable changes are the addition of a grand central hall, almost double the space for touring exhibitions (in the basement where the weight of exhibits isn’t an issue), and major accessibility improvements thanks to an Escher-like multitude of ramps, escalators and elevators. The best news for many, though, is the dropping of the entry fee (formerly $15 adults, $8 concession although there’s still a fee for special exhibitions). No wonder a crowd’s busting for a look-see.

Inside, a treasure trove awaits. The museum’s collection stretches to more than 18 million items so only a fraction is ever displayed. Thoughtful curation groups these objects into themed galleries you can linger in or whiz through, depending on your interests. On the ground floor of the Westpac Long Gallery, for example, are 100 intriguing treasures. One eye-catching sight is “The Bone Ranger”, the nickname for a rearing skeleton of Sir Hercules, a thoroughbred stallion that sired 18 big-race winners before his death in 1865, complete with a human skeleton perched on his back. 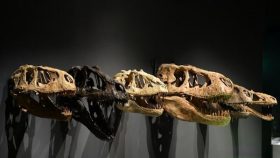 Tyrannosaurs wall of skulls at the Australian Museum.

Other curiosities include the slightly squashed Sydney funnel-web spider responsible for the first recorded human death by the species in 1927, a Tasmanian tiger pup and Australia’s first banknote. Upstairs is a display devoted to 100 people who shaped Australia, such as Caroline Chisholm, Joseph Banks, Julia Gillard, Woollarawarre Bennelong, Charles Bean and Ita Buttrose. Above that, fittingly, birds occupy the loftiest tier under the stunning vaulted ceiling.

Elsewhere, the world’s animals are celebrated in the Wild Planet exhibit and the building’s original features are shown off in two adjoining First Nations galleries. On level two, climate change solutions and mitigation are a new focus (practising what it preaches, the museum recycled more than 90 percent of building materials during its renovation). This floor is also home to the Prehistoric Playground, a new creative space for younger visitors (cleverly, adults can relax and re-caffeinate in a neighbouring new cafe). For more elegant dining there’s No 1 William on level four, which also serves up a surprise harbour view. 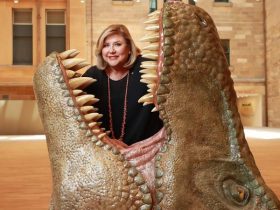 You could think this is more than enough but further new galleries, dedicated to minerals and ancient Egypt, are planned over the next three years. Certainly, catering to the public’s passion for Egyptian history seems a winning idea. A glance at the museum’s social-media accounts reveals widespread disappointment that the blockbuster exhibition, Tutankhamun: Treasures of the Golden Pharaoh, didn’t travel to the revamped museum after all (thanks to the pandemic, it returned to Egypt after showing in London). However, disappointed Egyptologists can always get their fix by heading to the University of Sydney’s Chau Chak Wing Museum, another free museum that opened in November.

The building brings the university’s Nicholson antiquities collection, Macleay natural history, ethnography, science and historic photography collections, and art collections under the one architect-designed roof for the first time. 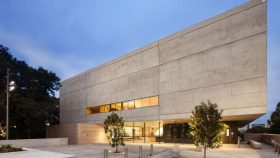 There’s much to enjoy within the pre-cast concrete walls, including an amusing Lego re-creation of Pompeii that entwines three historical narratives (including modern moments such as a 1972 Pink Floyd concert and a visit by Dr Who).

One of the most thrilling spaces is The Mummy Room. Thanks to Sir Charles Nicholson, the university’s first vice-chancellor, the institution has an extraordinary array of antiquities. Nicholson travelled to Egypt in 1856, met dealers and officials in Cairo and Luxor, visited archaeological sites and used his wealth to acquire a collection of artefacts drawn from different stages of Egyptian history. Among his purchases were the coffins and mummies of four people who lived in Egypt between 1200BC and 100AD.

They were among more than 400 objects packed into crates and shipped to the university, arriving in 1860. Even on his way home to England in 1862, Nicholson went shopping again, acquiring one of the museum’s most important sculptures, a bust of Horemheb, Tutankhamun’s general who rose to become a pharaoh of ancient Egypt. From this foundation, the Nicholson Collection has grown to almost 30,000 objects drawn from the ancient world.

You could spend your entire visit within the Egyptian Galleries, marvelling that the unwrapping of mummies was a popular entertainment in the 19th century. Scholars, including University of Sydney graduate Grafton Elliot Smith who became an anatomy professor in Cairo in 1900, also unwrapped mummies for research purposes and pioneered the use of x-rays to study mummification. These days, digital imaging is one of the less intrusive ways researchers find out more about what’s contained within ancient coffins. 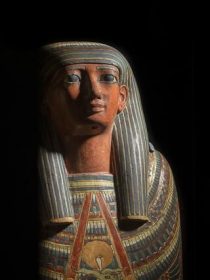 Other parts of the museum are equally splendid. On Level 4, the Ian Potter Gallery is showing 350 works by Yolngu artists (until August). The show incorporates everything from a dugout canoe crowned with a pandanus sail to bark paintings, carved animals, a black cockatoo feather fan, painted memorial poles and a multimedia work showcasing the use of white clay in Yolngu ceremonial dances. First Nations culture and heritage is highlighted throughout, with an ongoing “ambassador” display explaining ancient knowledge such as how swords were cut from rainforest fig trees in a way that left the tree alive, and how firesticks were used to maintain the health of the landscape.

Curatorial humour is alive and well in the Object/Art/Specimen exhibition, a mash-up of items from all three of the museum’s collections. Enjoy connecting the dots while wandering between meteorite samples, a Jeffrey Smart painting, land art featuring Sydney dirt, a bowerbird’s courtship nest, flint axes and a row of green and red stuffed parrots.

The Australian Museum is open daily, 10am-5pm; until 7pm every Thursday during summer. Visitors over 12 years are required to wear face masks in the building. The cloakroom is closed. The Tyrannosaurs — Meet the Family exhibition runs until March 14; $20 adults, $10 child (four to 15), $51 family of four.

The University of Sydney’s Chau Chak Wing Museum is open weekdays 10am-5pm; until 7pm every Thursday; 12pm-4pm on weekends. Visitors over 12 years are required to wear face masks in the building.