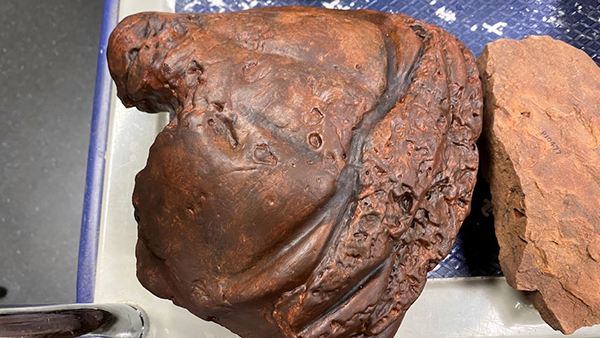 A 3D replica of the largest trilobite’s pygidium, or its bottom. ABC Alice Springs: Emma Haskin.

A giant prehistoric underwater invertebrate that once called central Australia home has been identified as a new species.

Fast forward almost 60 years and that species, along with four other trilobites, has finally received classification in a paper co-authored by Patrick Smith, a paleontologist from the Australian Museum, and John Laurie, emeritus scientist with GeoScience Australia.

Dr Smith said the Lycophron titan was significant as the specimen’s tail measures around 16.5 centimetres, which is extraordinarily large in comparison to other trilobites of the same age. 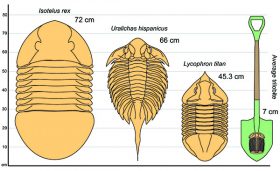 The newly named trilobite compared with others. Supplied: Patrick Smith.

“It’s one of the third-largest in the world [and that] makes it the largest trilobite found in Australia,” Dr Smith said.

“The previous record-holder was actually the same size as the tail of this animal alone.”

Dr Smith and his co-author Dr Laurie decided to look to the Greek gods for inspiration for naming the species.

“We decided to give it the name Lycophron titan after the Greek gods, the Titans being quite large we thought it was quite appropriate,” he said. 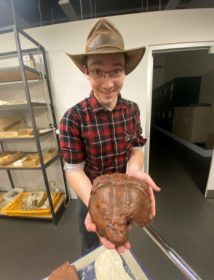 Naming the creature allows scientists to use the fossils as timepieces.

“We use these sorts of fossils as what we call biostratigraphic markers,” Dr Smith said.

“Like a clock, you have the hours marked out on a clock, we use some fossils in the same way.

“For example, this fossil tells us it’s from the Ordovician period.”

Dr Smith said these sorts of animals were very different to anything that existed on modern-day Earth and were one of the most successful organisms of the time. 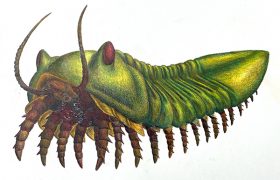 “These creatures survived on Earth for 250 million years by eating detritus that had fallen to the sea floor,” he said.

However, Dr Smith said these creatures would have fed in a different way to crabs and lobsters as they did not have mouthparts.

“These guys actually had their mouthparts underneath their body, and would have munched up [food] using the bottoms of their legs,” he said.

“Think of basically eating a hamburger with your elbows,” he said.

The original fossil is on display at Geoscience Australia in Canberra with a to-scale copy on display in Alice Springs. 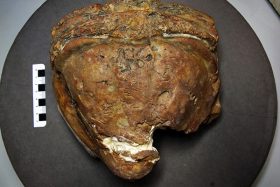 “The facsimile is a 3D-printed model made from acrylonitrile butadiene styrene,” Dr Smith said.

The model has been handpainted by Dr Adam Yates, the senior curator of Earth Sciences for the Museum and Art Gallery of the Northern Territory by using photographs of the original.

“The copy was printed based on 3D scans taken of the original by myself and others at the Australian Museum and sent to Adam for use in his display,” Dr Smith said.

Adam Yates from the Museum and Art Gallery of the Northern Territory and Patrick Smith from the Australian Museum with the 3D replica.(ABC Alice Springs: Emma Haskin).

“One of the amazing things about 3D scanning technology is that it enables us scientists to share specimens without risking the original being damaged in transport, or all the logistic costs of sending a rock that can weigh tens or hundreds of kilograms.”

Dr Smith said the copy was “a great representation of the original”.

“It’s nearly perfect, and for those unfamiliar with the original it’s almost indistinguishable,” he said.