You are here: Home » Articles filed under: 'News' » Article: 'AM & IBM on ‘Urgent rescue mission’'

AM & IBM on ‘Urgent rescue mission’ 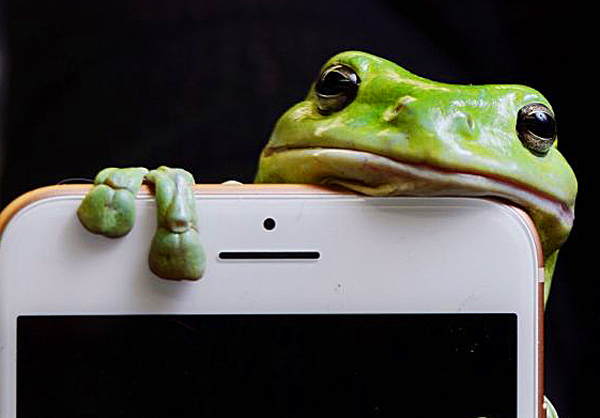 Like the stars of stage, screen and Sesame Street, the 25-year-old green tree frog called Godzilla​ was immediately ready for his croak up.

When Godzilla saw an iPhone at the Australian Museum this week, the male frog hugged it. It was an appropriate response given that a new smart phone app called FrogID is being described as an “urgent rescue mission” to save frogs that are vulnerable or endangered.

It’s part of a national citizen science initiative to count Australia’s frogs, which is being launched by the Australian Museum on Friday.

The app developed by IBM works a bit like the music identification and discovery app Shazam by recording male frog’s chirps, barks and croaks. After downloading the app and turning on the location to aid identification, all users have to do is hit record when they think they hear a male frog calling out to attract the females of its species.

The museum’s frog expert Jodi Rowley said frogs were often hard to identify by sight: some species look so similar that she sometimes has to inspect the front legs to find small differences. Like humans, each frog has its own “voice”, and a larger frog will sound deeper than a younger, smaller frog.

Of the 240 native Australian species, four frogs are already extinct, five are critically endangered, 14 are endangered and 10 are vulnerable, said Dr Rowley, the curator of amphibian and reptile conservation biology.

“Frogs are an incredibly threatened group of animals,” she said. “Globally it is 42 per cent of all species [that are threatened], which is faster than birds and mammals. And one of the major obstacles in preserving frogs is a lack of knowledge.”

In Australia, an estimated 20 species of frogs have yet to be named or identified. There may even be cases where what is thought to be one species could actually be three. “That has huge conservation implications,” she said.

Frogs are bio-indicators, and, like the canaries in the coal mine, they are often the first to perish when the quality of water deteriorates or from changes in their habitat.

Kathy Potter of the Frog and Toad Study Group lives with Godzilla and about 40 other frogs, which the educational group has saved or rescued.

“It is nice to see people doing things with frogs,” she said of the new FrogID app. “It’s usually pretty lonely out there. It is a really specialised kind of crazy.”

Frogs were easier to find than most people thought, she said, adding they were everywhere.

“You don’t have to go out into the wilderness and be the next David Attenborough … you can go to your local oval at night, you find them in drains, you find them in gutters, any parkland with waters, a good thing to do with friends.”

Dr Rowley is hoping citizen scientists may also find some frogs that have gone missing, such as the peppered tree frog, which was last seen in 1970s in NSW’s Northern Tablelands and may be threatened with extinction.

“It is a little bit of a needle in a haystack because it is about two centimetres in body length [and lives in deep gorges],” she said.

“This is one species where it would be amazing if somebody out there recorded its call,” said Dr Rowley who has been looking for it.