You are here: Home » Articles filed under: 'News' » Article: 'AM, MV, Smithsonian & univ on monotreme route' 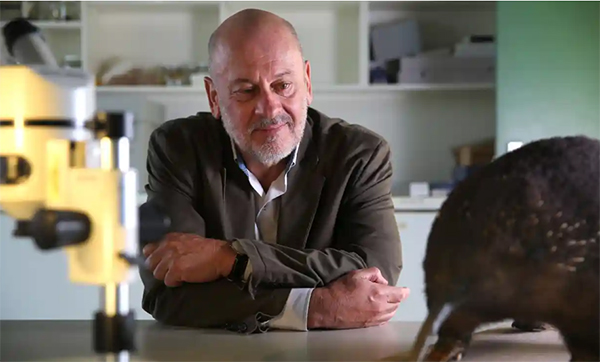 Fossil analysis is shedding new light on the origins of egg-laying mammals and their arrival on the continent.

Researchers have pinpointed exactly how and when echidnas likely arrived in Australia as part of a fossil analysis shedding new light on the origins of egg-laying mammals.

The platypus and four species of echidna are the only remaining living monotremes – mammals that lay eggs instead of giving birth to live young. New analysis of every monotreme fossil discovered to date has recast the earliest history of the animals.

Mysteriously, their analysis found the oldest echidna in the Australian fossil record dated back just 2m years, relatively recent in the species evolutionary history. “It’s tens of millions of years since echidnas and platypuses have shared a common ancestor,” Helgen said. 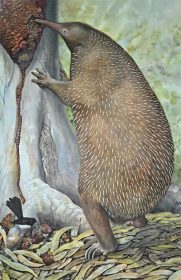 Murrayglossus hacketti, a giant echidna of the pleistocene era found in Western Australia. At about 30kg, it’s the largest egg-laying mammal ever discovered and may have fed on termites. Photograph: Peter Schouten/None.

The study’s authors believe that echidnas may have migrated to Australia from the Bird’s Head Peninsula on the island of New Guinea at the beginning of the last ice age, about 2.6m years ago.

“That [region] is a good candidate because there are several species of echidnas there today,” Helgen said. All four living echidna species can be found in New Guinea, while only the short-beaked echidna is present in Australia.

Periodically through history, New Guinea has been physically connected to the Australian continent. “Ten thousand years ago, you could walk between the two,” Helgen said. “It almost certainly had to be some kind of Lost Ark of New Guinea island that was harbouring echidnas … because they’re invisible through a pretty good Australian fossil record [for millions of years], for a group of animals that fossilised pretty well.”

The researchers have also classified the earliest monotreme, a tiny insect-eating creature that lived an estimated 126m years ago, in its own mammalian family. The animal, Teinolophos trusleri, weighed an estimated 40g and lived at a time when southeastern Australia lay close to the south pole, as part of the supercontinent Gondwana.

Helgen said Teinolophos trusleri likely possessed an “unusual sixth sense that monotremes use” – a large set of nerves in their faces that are capable of detecting electric fields, which help find prey. “We think that in a place where there would have been polar night for a lot of the year … this might have been the right condition for that kind of monotreme hallmark to evolve.”

“Even though it was so long ago … [Teinolophos] was already on the track to evolving the characteristic bill that later we see in platypuses and echidnas,” he added. Fossils of the monotreme were first found at Flat Rocks in eastern Victoria.

The distinct categorisation as a new taxonomic family provides “a really good indication that this was a completely different way of being a mammal”, Helgen said. “The dogs are a family, the cats are a family.”

Examining the fossil record, the researchers found that monotremes subsequently diversified in Australia, with some evolving body masses between 4 and 8kg. “These are some of the largest mammals that existed anywhere on the planet during the age of dinosaurs,” Helgen said.

“We think that this has adaptations that show it was probably the best of the echidnas … at climbing,” Helgen said, adding: “Modern echidnas are actually really good climbers – they can climb up trees and fences.”

The comprehensive fossil analysis, he said, gave the team an opportunity to “tell this single sweeping story of how monotremes came to be.”