You are here: Home » Articles filed under: 'News' » Article: 'AM optimism for Christmas (beetle count)'

AM optimism for Christmas (beetle count)

December 17th, 2021 | Browse other: News. | Tagged with: Invertebrates Australia’s communal tracker, Where Did All The Christmas Beetles Go? | 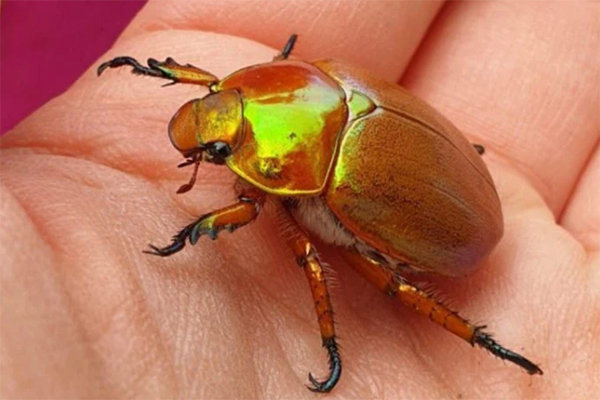 Millie Roberts, Excuse Me, Where Did All The Christmas Beetles Go?, Junkee, 10 December 2021

Christmas beetles — the iridescent critters usually found whacking into human limbs, clinging on fly screens, or frantically wriggling to get off their backs — have all but disappeared. Their staple, en masse appearance around the holiday season has been noticeably absent in recent years and the reason is as obvious as it is tragic.

Scientists believe climate change and urbanisation are the reasons the native scarabs have gone MIA: adult Christmas beetles can’t access their food supplies as easily, and little baby larvae no longer have the right conditions to thrive and grow, dying in insect infancy.

The ramifications screw over the wider food chain as well. “They’re the tasty little lunch of magpies and cockatoos and kookaburras, and to see a decrease in their population, we’re seeing huge repercussions in these micro ecosystems,” said Jensen-Mackinnon. 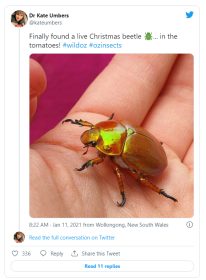 While anecdotally viable, scientists can’t fully corroborate the claims just yet. “Everybody feels like numbers are going down, and people claim that we don’t see them in the numbers that we used to, we don’t have that data,” University of Sydney entomologist Tanya Latty told the ABC.

She urged fellow passionate eco-saviours to log their Christmas beetle sightings on Invertebrates Australia’s communal tracker for better data that will help save their population from dwindling any more. Because who wouldn’t want the next generation to experience the joy and presence of a beetle literally known as ‘cockchafers’ overseas.

“This year has seen good conditions for them – a wet winter and spring – so the emergence success rate of adults is good, but there are just so few after so many bad years,” said Reid. “Next year will be critical – if it is good as well, then we should see better numbers, the successful emergence of the offspring from this years’ adults.”