You are here: Home » Articles filed under: 'News' » Article: 'AM redevelopment architects announced' 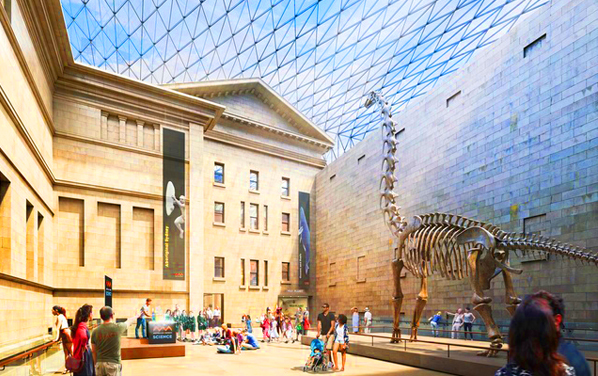 A future grand hall at the centre of the museum, part of the 2016 masterplan prepared by Hames Sharley Image: Courtesy Australian Museum.

Two architecture firms have been appointed for the $57.5 million refurbishment of Australia’s oldest museum, the Australian Museum in Sydney.

Cox Architecture and Neeson Murcutt Architects were announced as the project’s architects by NSW arts minister Don Harwin on 27 November.

Neeson Murcutt, together with Hames Sharley, prepared drawings for the project’s state-significant development application, which was submitted in October, but no architect had been appointed at that stage.

The redevelopment will see museum storage space facilities converted into exhibition spaces, with the view to increase the museum’s capacity to host “blockbuster” international touring exhibitions.

Part of the project will be extending the museum’s entrance pavilion, the Crystal Hall, which was designed by Neeson Murcutt and Joseph Grech and completed in 2015.

The refurbishment will also create a new dedicated group entry and bus drop-off zone off Williams Street, a new members’ lounge overlooking Cook and Phillip Park and St Mary’s Cathedral and a new café on level two. An existing mezzanine floor at the centre of the museum will be removed to create a double-height central hall.

“The appointment of highly-experienced architects for the redevelopment is an exciting step in the museum’s transformation and unfolding story as one of the nation’s most important cultural institutions,” said Australian Museum director and CEO Kim McKay.

The expanded museum will be capable of accommodating more than 800,000 visitors in six months. The redevelopment will be completed in time for the museum to host the largest Tutankhamun exhibition to ever leave Egypt, Tutankhamun: Treasures of the Golden Pharaoh, which will open in 2021.

“This is a milestone project that will ensure that one of the state’s most significant heritage and cultural institutions continues to flourish,” said Don Harwin.

“Cox will bring experience in the design and delivery of award-winning public projects, including museums. Neeson Murcutt will bring an intimate knowledge of the museum through its 2016 Australian Institute of Architects’ NSW Public Architecture Award-winning Crystal Hall entrance. Both practices have a reputation for design excellence.”

Opened in 1857, the Australian Museum is the country’s first public museum. The original building, the Lewis wing on William Street, was designed by the NSW Colonial Architect Mortimer Lewis.