You are here: Home » Articles filed under: 'News' » Article: 'AM reopens with major renovations'

AM reopens with major renovations 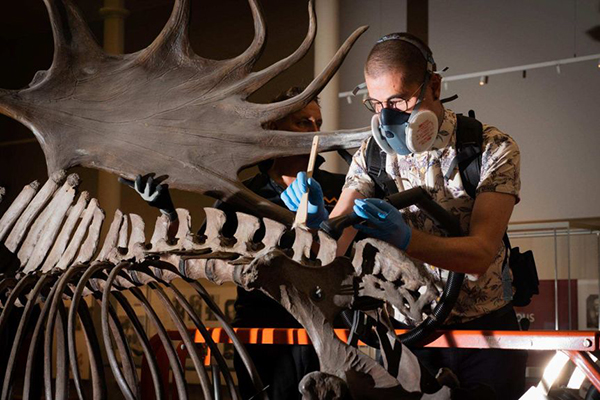 Dusting off an 8,000-year-old Irish elk skeleton is no simple task — especially when it’s three metres wide, two metres tall, has giant antlers and is suspended in the air.

The skeleton is just one of more than 21 million specimens being cleaned, dusted and arranged for the re-opening of the Australian Museum on November 28.

The iconic institution has been closed for 15 months and undergone an extensive $57.5 million transformation, dubbed Project Discover.

As part of the “top-to-bottom” upgrade, some back-of-house areas were knocked out to add more than 3,000 square metres of new public space.

A grand hall the size of three tennis courts was created, while a gallery space in the basement will house a new international exhibition: Tyrannosaurs — Meet The Family.

The exhibition was last on display at the Australian Museum seven years ago and has since toured Europe and the United States. 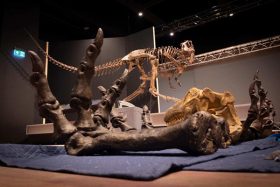 The Tyrannosaurs exhibition is an interactive display filled with skeletons, fossils and a life-sized T. rex.(ABC Sydney: Amanda Hoh).

“I just can’t wait to invite the people of Sydney, and NSW and hopefully Australia soon when the borders open more, back into the Australian Museum.

“This is the nation’s first museum and it was overdue for a major refurbishment.”

Other improvements include a new central staircase with views out to St Mary’s Cathedral, a new museum shop, a second cafe, improved accessibility, amenities and new education rooms.

Ms McKay said there were still more renovations to come within the next three years, including the creation of three new galleries, two of which will have minerals and Egyptian exhibits.

Caring for the specimens

The Australian Museum houses the largest collection of objects and specimens in the southern hemisphere.

A team of nine conservators are responsible for maintaining the collections and have been overseeing their arrangements back in the galleries ahead of the opening. 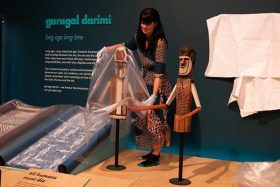 Heather Bleechmore takes a display out from under protection sheets.(ABC Sydney: Amanda Hoh).

“We’ve spent the last couple of months preparing for the opening, on top of looking after the museum’s galleries and collections during the building works.”

While many objects were moved into storage before renovations began in August 2019, others that were kept on display were covered in plastic dust sheets.

Vibration monitors were attached to the collections so that any extreme ground movement from the building works would sound an alarm. 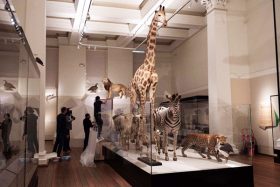 The Australian Museum has over 21 million objects and specimens in the collection.(ABC Sydney: Amanda Hoh).

Highly fragile specimens had a vibration threshold of one millimetre of movement a second, while the large taxidermy animals could withstand three to four millimetres a second.

Nothing was damaged during the renovations according to Ms Bleechmore.

Brushing off the dust

Each specimen requires different cleaning styles and tools depending on its shape and size.

“You can work on tiny needle-like crystals sticking out of a branch … they are incredibly fragile,” Ms Bleechmore explained.

“Then you could work on a lion or a black rhino or a giraffe which are more robust.

“These are all natural materials, they have such a range of issues.” 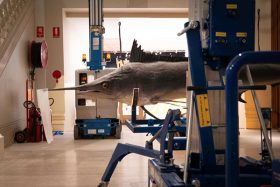 Specimens were put into storage during the Australian Museum’s renovations.(ABC Sydney: Amanda Hoh).

In a conservator’s tool kit, which is “akin to dentist tool kits”, are scalpels, surgical scissors and jewellers loupes for magnification.

Brushes in a range of sizes sweep debris and dust into a vacuum while light, humidity and temperature monitors measure the environment for ideal preservation.

The work is intricate, often time consuming but also creative.

Conservator Sheldon Teare, said he used thin Japanese tissue paper laminated over to give a crack in the bone of the Irish Elk skeleton some support. 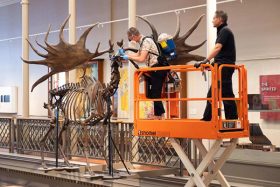 The specimens are cleaned annually by the conservation team.(ABC Sydney: Amanda Hoh)

“Fossils can be very very fragile, even though they are on their way to being stone and rock,” Mr Teare said.

He explained how he was cleaning the Irish Elk: “I’m making sure I’ve removed the top layer of dust that’s accumulated from being out and about.

“I’m very carefully brushing the top layer away and making sure it gets sucked up into the vacuum cleaner to make sure it doesn’t fall on the other collections.

“You can’t zone out when you are doing this vacuuming, you have to be really aware of what you’re doing.”

To celebrate the re-opening, the NSW Government is offering free general admission, which Ms McKay hopes will be long-lasting.

She said when the government first started charging for entry in the early 1990s, visitor numbers “halved overnight”. 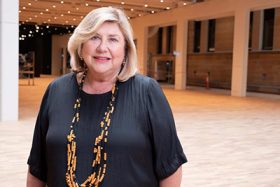 Kim McKay was appointed director and CEO of the Australian Museum in 2014 and has overseen its transformation.(ABC Sydney: Amanda Hoh).

“I don’t think museums which are owned by the state should be charged for,” Ms McKay said.

“Going that step further to allow adults to come in for free is going change the paradigm of how this museum is enjoyed.

“When we’ve had free weekends here in the past I’ve stood at the front door and watched who came in and there were three generations in every family.

“They came from Western Sydney, they’re immigrants to Australia, they want the best education for their children and yet they were only coming when it was free because charging is an impediment.

“I’m hoping the free entry general admission will mean the public will flock back here in the future.”

The Tyrannosaurs exhibition was the only one that required a paid ticket and the first day had already been booked out, Ms McKay said.

While there is no limit on visitor numbers, the museum will monitor capacity within the galleries and spaces as part of COVID-19 safety measures.