You are here: Home » Articles filed under: 'News' » Article: 'AM Research Inst establishes' 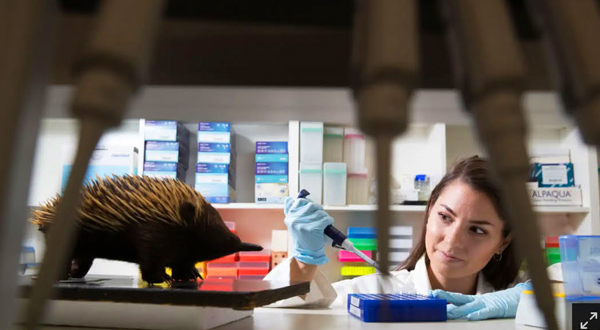 It’s real life CSI, but the victims are unusually prickly.

Wildlife forensic scientists at the Australian Museum in Sydney have developed a tool kit that will track the source of black market echidnas by analysing mitochondrial DNA in an animal’s quill.

“It’s like a human CSI case,” said Dr Greta Frankham from the Australian Museum in Sydney.

Many echidnas for sale in south-east Asia are being falsely marketed as “captive bred” often using fake paperwork.

Using a test developed by a PhD candidate at the museum, Alex Summerell, the DNA in the monotreme’s quills shows where they were bred and which animals were related.

Illegal trade in wildlife was estimated to be worth as much as $US 23 billion in 2014, and the laundering of animals as captive bred is a growing problem, says a newly published paper by Ms Summerell and Dr Frankham in Forensic Science International.

So when Australian scientists saw dozens of echidnas being sold each year as “captive bred” they suspected many had been caught in the wild.

Ms Summerell said fewer than 30 puggles (baby echidnas) had been born within the last 10 years in Australian zoos, yet some years between 70 and 150 short beaked echidnas were for sale.

Ms Summerell’s DNA test follows the development of another test using quills. Developed by Taronga Park Zoo last year, it tests the keratin in a quill to see if the animal’s diet was typical of one born in captivity or in the wild.

Echidnas are notoriously difficult to breed in captivity because as many as 11 male echidnas trail a female for weeks in what some have described as a love train. These trains can last up to six weeks, with the males bumping others out of the way and nudging the female to see if she is receptive.

After all that, the echidna only lays one egg each season. And many puggles don’t survive past one year, Ms Summerell said.

“You can see why [this mating] is difficult to replicate in captivity,” Dr Frankham said.

Last year Taronga Zoo announced the birth of two short-beaked echidna puggles. They were only the seventh and eighth to be born at the zoo. The previous births were in 2016 and 1987.

Ms Summerell said the test would show if the echidna was from from south-east Asia and if it was captive bred or wild caught. “This also has the potential to provide useful intelligence on where the echidnas are specifically being taken from and pinpoint hotspots to inform law enforcement,” she added.

There are only five living monotreme species: the platypus and four species of echidna (also known as spiny anteaters). All of them are found only in Australia and New Guinea.

The director of the Australian Museum Research Institute Dr Rebecca Johnson said the dollar value placed on illegally traded wildlife increased the level of poaching, pushing some species to near extinction.

She said the museum’s DNA lab provided a fast and effective way of identifying illegal products.

“Given what could be described as the epidemic of wildlife poaching, additional DNA-based tools are invaluable for those authorities involved in investigation and enforcement of wildlife trade laws,” she said. “These tools are being developed in the battle to combat the trade in high-profile species such as elephants, rhinos and tigers, but also other species such as echidnas.”