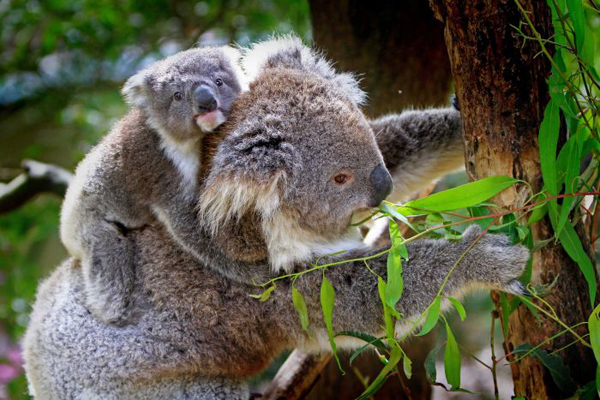 Munching on eucalypt leaves would kill most other mammals, but koalas have a large number of genes that enable them to tolerate their toxic diet.

However, the same genes also play a role in making some drugs used to treat sick and injured animals almost useless.

This double-edged sword is just one of the discoveries to come from an Australian-led project that has sequenced the entire koala genome.

The genetic blueprint is on par with the human genome, according to Rebecca Johnson of the Australian Museum Research Institute.

“We have sequenced and assembled the entire koala genome … 3.5 billion base pairs, which is actually a little bit larger than the human genome.”

The genome provides insights into the koala’s highly specialised diet, immune system, biodiversity and evolution, Professor Johnson and her colleagues report in the journal Nature Genetics.

They said the information would guide conservation of the iconic animal, which is vulnerable to habitat loss, climate change and disease.

“It’s such an important animal for our country, it’s an important ambassador for understanding why habitat needs to be protected,” Professor Johnson said.

Unpicking the secrets of picky eaters

Koalas are notoriously fussy about where they live and what they eat.

In the couple of hours a day they are not asleep in the crook of a tree, they eat their way through about 600–800 grams of leaves.

But not any leaves. They graze on only about 20 out of the 900 known species of eucalypt.

They also almost exclusively rely on the leaves for water, seeking out leaves with at least 50 per cent water content, Professor Johnson said.

Analysis of the genome shows koalas have lots of bitter taste receptors, as well as a duplication of what is known as a “water taste” gene.

“This might be … a way they sense water in the trees,” Professor Johnson said.

They also have a large number of genes that produce enzymes that detoxify terpenes and phenolic compounds.

“Everything needs detox [genes] but koalas seem to have them in much higher quantities,” Professor Johnson said.

But there is a downside to this gene family, known as cytochrome P450 monooxygenase or CYP 450 genes.

The enzymes also effect the metabolism of antibiotics, said Peter Timms, of the University of the Sunshine Coast, who was also involved in the study.

“They break down antibiotics faster than we can give them. Then as we give them higher doses we then upset their gut flora bacteria,” Professor Timms said.

Antibiotics are used to treat chlamydia, a bacterial disease that can cause blindness, sterility and urinary tract infections.

It appears that joeys may gain some protection against the disease from their mother’s milk.

The team identified a number of genes involved in fine turning the composition of milk, including proteins that may have antimicrobial properties.

Chlamydia affects all populations of koalas, said Professor Timms, whose team has been working on a vaccine for the infectious disease and the koala retrovirus.

The retrovirus, which has been linked to cancer, seems to make chlamydia worse.

“It’s actually moving through the koala population in front of our eyes,” Professor Timms said.

“The southern koalas aren’t infected with it yet whereas the northern ones are.”

Developing treatments for these diseases has been challenging because little was known about the animal’s immune system.

“[The koala genome is] revolutionising both what we can understand but also what we can do,” Professor Timms said.